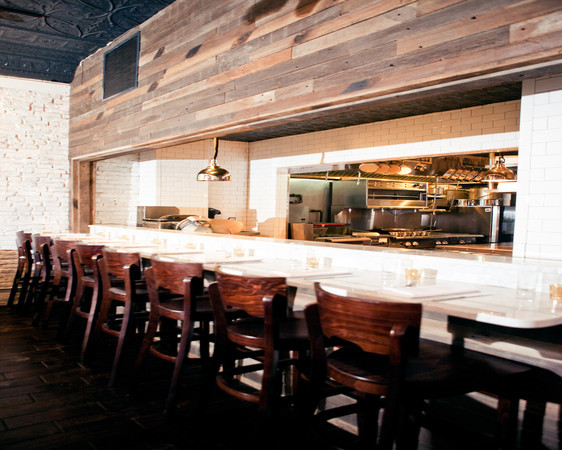 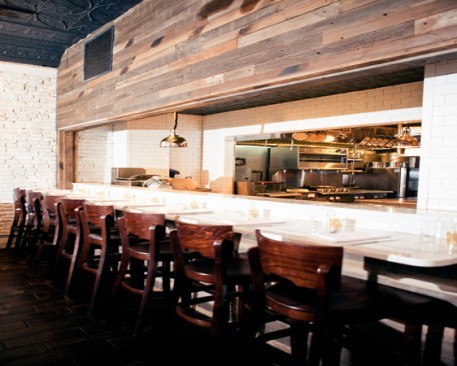 One of the first restaurants on our fall preview list to actually open its doors, Prospect debuts in Fort Greene tonight. (A busy evening to kick things off, what with Jay-Z’s eight-night run at nearby Barclays Center starting tonight, too.) The Prospect team have done a fantastic job rehabbing the once-dumpy Aqualis Grill space. The completely overhauled dining room is anchored by a long marble bar that runs almost the entire width of the restaurant, leading towards the showpiece: a chef’s counter facing the open show kitchen, which is framed by a recessed wall of white subway tiles, plus a feature crafted from reclaimed segments of Coney Island Boardwalk. Open kitchens are a dime a dozen these days, but they often feel cramped and crazy, like you’re peering into a world you aren’t supposed to see. Prospect’s is the opposite; it’s built right into the dining room, and it feels like it’s supposed to be there.

Oh right, the food. Prospect is probably the most ambitious restaurant to open in Fort Greene yet. Some locals may balk at the price tags on the main menu–one entree tops the $30 mark, a first for this neighborhood, if I’m not mistaken. However, the inventive dishes, which I got the chance to taste earlier this week, live up to their billing. A juicy serving of free-range chicken breast and thigh roulade comes topped with pieces of crispy skin “chips,” which are stuffed with black truffles. They’re served over creamy, melted leeks, charred leaves of Brussels sprouts, and an airy dollop of chestnut milk froth. It’s a hearty, fall-flavored dish that makes you think of Thanksgiving–albeit the fanciest Thanksgiving you’ve ever had.

Fortunately, Prospect isn’t only designed for date night. There’s also a bar menu, anchored by a tasty Wagyu beef-short rib burger, and Truffled french fries that are, in my opinion, as good as fries get. The long, golden-brown strands are perfectly crisp on the outside, with just that hint of mushiness on the inside so that you don’t forget you’re actually eating potatoes. On both the high- and lower-end menus, Chef Kyle McClelland’s food is an intriguing mix of hearty flavors (truffles galore) and light and airy textures. For example, an appetizer of Benton ham–smoked and salty in the Virginia style, but soft and sliky in texture like prosciutto–is served over buttery strips of whole wheat cavatelli, topped by a spicy Parmesan froth that brings a sharp, cheesy flavor, without adding any heaviness. The cocktail menu is also inventive; the best one I tried is “Smokey and the Bandit,” where the intense, almost bacon-y smokiness of Laphroaig whiskey is balanced out by peach liqueur, honey syrup, Dewar’s and a slice of fresh peach.

Overall, Prospect succeeds at what many new Brooklyn restaurants try to do these days: create a homey, neighborhood atmosphere, but also serve unique, forward-looking food. It’s a tough thing to pull off–to be both a place where you can grab a burger and draught at the bar, or settle in for foie gras terrine and a plate of “milk-fed veal and its cheeks.” (There’s also a five-course chef’s tasting menu for $80–hopefully I can report back on that later!) Taste-wise, Prospect certainly does things well, so it will be interesting to see if Fort Greene eats it up.