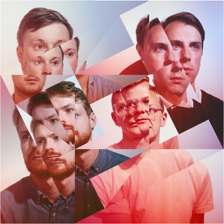 It wouldn’t be totally inaccurate to say that British band Django Django takes a page from the late ’60s and early electronic music–the quartet’s quirky yet engaging self-titled debut record sounds like ’60s British bands somehow got their hands on some synthesizers. Django Django, which first came out earlier this year in their native U.K., is marked by minimalist percussion and electronic flourishes. The album starts off somewhat ominously with “Introduction,” a song laced with cricket sounds and video game noises that then segues into “Hail Bop” which is plenty poppy. “Skies Over Cairo” shows an electronic-laced Middle Eastern influence that befits the song’s title; and “Default” and “Waveforms” both possess a danceable groove.

At moments, the band–which got its start at an Edinburgh art school–incorporates some twang  and folk sensibilities into songs like “Firewater,” “Hand of Man” and “Lover’s Dart.” Judging from this album, it’s no wonder that Django Django was recently nominated for Britain’s Mercury Prize. They’re closing out their American tour Thursday in Brooklyn at the Knitting Factory, so catch them now before they blow up so you can say, “I saw them when…”

Django Django will be playing on Thursday Oct. 4 at The Knitting Factory, 361 Metropolitan Ave., Brooklyn, 8 p.m.; 15. Their latest album, Django Django, was released in the U.S. on Tuesday.