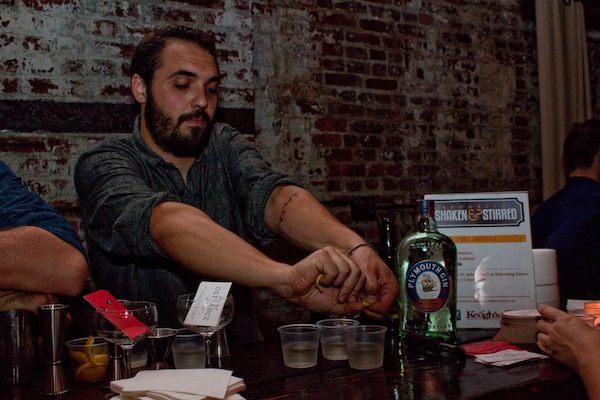 A Fort Defiance bartender mixes up a St. John's Martini.

Those of you who followed our Tip Sheet advice and went to Tuesday night’s Shaken & Stirred event at the Green Building got to taste an array of new cocktails from bars and restaurants around Brooklyn. For those of you who didn’t, here are my four favorite finds, each of which you can try out at a bar near you.

1. Heat Ray, PokPok: The Thai newcomer’s beer slushies may be out of season now, but it’s the right time of year to get on board with their drinking vinegars. This spicy seasonal special takes celery som drinking vinegar (which they only make this time of year), and mixes it with Thai chiles, fresh lime juice and vodka. Like PokPok’s food, it’s somehow insanely spicy and oddly refreshing at the same time.

2. 5-Spice St. Clair, The Sunburnt Calf: In this slightly modified take on a classic, Buffalo Trace bourbon is mixed with angostura bitters, orange peel, and a 5-spice agave syrup. It’s basically an Old Fashioned, with a wintry kick thrown in via the 5-Spice—a tasty accompaniment to Sunburnt Calf’s inventive Australasian cuisine.

3. The Van Horn, Van Horn Sandwich Shop: This Cobble Hill eatery may be best known for its pimento cheese and fried chicken sandwiches, but apparently they mix up a mean cocktail, too. This one also starts with Buffalo Trace bourbon, but gets crazier from there: throwing in bruised basil, green chartreuse, fresh lemon, and honey.

4. St. John’s Martini, Fort Defiance: Everyone seems to want to put chocolate whiskey or absinthe or miracle berries in their marintis lately, but the best one I’ve had isn’t actually new at all. Fort Defiance ownder St. John Frizell gets just a little bit creative, topping his Plymouth gin and dry vermouth martini with orange bitters and a twist, enough to make it sweeter than a straight-up gin martini, but not so much that it feels like you’re eating a meal.