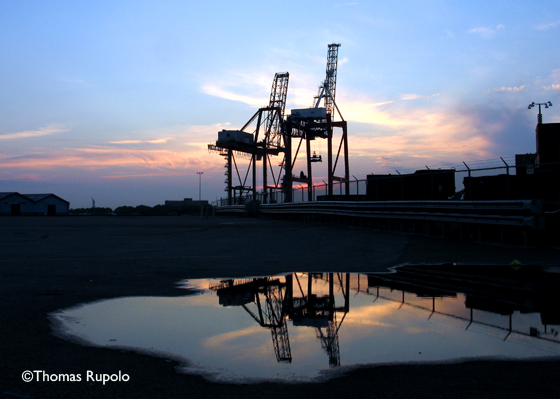 The silhouette of cranes on Atlantic Basin at sunset.

Sunny’s Bar was opened in 1890 by the Balzano family

Red Hook sign is at the corner of Van Brunt Street and Hamilton Avenue.

This tar paper house—now a hangout for the owner and his friends—has been a toy bow-and-arrow company, a water testing facility and a mechanic’s shop.

This 2004 photo shows Todd Shipyards, which was built in 1915 and abandoned for 10 years before IKEA purchased the site in 2006 for its Brooklyn location.

The Red Hook Houses, the largest public housing development in Brooklyn, was built in 1938.

Thomas Rupolo sorted through a decade’s worth of photos to compile his new book of Red Hook images, history and quotes.

“There have been, and still are many Red Hooks: a desolate industrial wasteland, a crime-ridden and scary neighborhood, a raucous port town and pirate playland, a gentrifying artist’s enclave, a trendy shopping and eating destination, and a real estate developer’s dream,” Thomas Rupolo writes in the introduction to Images of Red Hook. “This is mine.”

The book, which comes out on Oct. 15, draws on more than a decade’s worth of Rupolo’s photography, and incorporates the history of the neighborhood, as well as quotes from residents. “Your standard Red Hook person is pretty colorful, said Rupolo. “A lot of my friends are that way.”  Next to a photo of the Revere Sugar Refinery, local illustrator and musician Vince Musacchia recalls that as a boy in the early ’60s, he believed that the factory’s dome was the Friendship 7 space capsule. Next to a photo of shipping containers piled on a desolate street, there’s a quote from a supervisor for the Gowanus Canal Flushing tunnel remediation project. “Red Hook was passionate, it was angry, but it was working,” he says of the neighborhood’s recent changes. “Now it’s becoming artsy-fartsy, and yet…I feel embraced by the community. But I still can’t get my wife to visit.”

The Brooklyn Greenway Initiative, at 153 Columbia St. will host a book party for Rupolo this Saturday, Oct. 6 from 5 to 9 pm. The party—with food, beer, wine and books for Rupolo to sign—kicks off a month-long exhibition of his photos at the space. There’s also a book party in South Slope on Oct. 11 at Mary’s Bar on 5th Ave and 22nd St., featuring food, digital projections and drink specials.

Fittingly, the Greenway Initiative is where the book project really began. “A happy coincidence is that my book launch party should be at their headquarters, and it goes full circle somehow,” Rupolo said. He embarked on a volunteer project several years ago for the iniative, a non-profit involved in planning the 14-mile green space along Brooklyn’s waterfront from Greenpoint to Bay Ridge—including Red Hook. Rupolo traveled along the intended Greenway Route, snapping photos for a presentation they were putting together. “A lot of the best pictures were taken in Red Hook,” Rupolo said. “It’s such a photogenic neighborhood.”

After seeing the Greenway photos, Greg O’Connell, Jr., of The O’Connell Organization, contacted Rupolo. The real estate company owns and manages 1.3 million square feet of property in Red Hook and wanted photos to use for RedHookWaterfront.com to showcase the neighborhood. Rupolo pored over photos he’d taken over the past decade and decided to compile a book.

Some of the landmarks depicted in the book have disappeared since Rupolo photographed them, most notably the Revere Sugar Factory–which was never a spaceship of any kind. It was demolished in 2006 and the Todd Shipyard Graving Dock was torn down in 2005 to make way for IKEA.

“One thing I was struck by, looking at 10 years’ worth of pictures, was not so much the amount of changes but really how much it has stayed the same, especially when you compare it to everywhere else in New York City,” Rupolo said. He credits the preservation of the neighborhood’s distinct character to the lack of public transportation. “It’s a pain in the ass to get here,” he explained. “People, they wear that as a badge of honor down there…Red Hook’s isolation has been both its savior and its thorn in its side.”