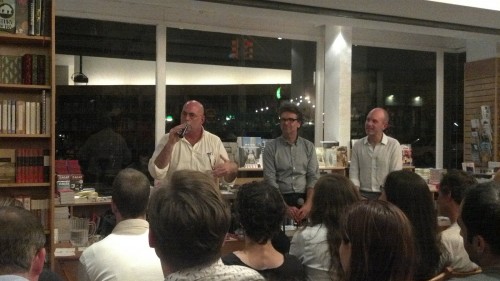 As our lives move ever quicker, there is often talk of the short story enjoying a renaissance, especially now that bite-sized chunks of fiction can be delivered to our iPads for easy consumption on our subway commute. The Paris Review, as editor Lorin Stein pointed out at Greenlight Bookstore last week, has been at the forefront of promoting the short story in digital form. They just launched their new app today, in fact. But considering his appearance at Greenlight was in celebration of the publication of  Object Lessons: The Paris Review Presents the Art of the Short Story, the esteemed literary journal is not turning its back on old-school print. In its latest anthology, Object Lessons brings together 20 contemporary authors who introduce 20 short stories from the Paris Review’s archives, as a reminder, Stein said, of how much pleasure the form can give.

At the packed Greenlight event for the book, Stein was joined by writer David Means, who chose Raymond Carver’s “Why Don’t You Dance” for Object Lessons, because when he was sent the list of 500 stories he thought he would chose the one that was “actually great,” and Brooklyn writer Donald Antrim, who said he couldn’t contribute to the collection after other contributors keenly snapped up all his choices.

After David Means read briefly from his selected Carver’s story, the three launched into an extended discussion of the trial and tribulations of the short story as a form. Antrim described how for him a short story is a “communication of empathy,” while Means, in a less elevated but equally eloquent manner, compared the form to Carly Rae Jepsen’s “Call Me Maybe”—a short burst of energy that makes you want to reread, or replay, to capture that emotional feeling. My feelings about “Call Me Maybe” aside, both expertly captured the power of a short story.

Despite editing The Paris Review, a magazine dedicated to short stories, Stein revealed that he found it difficult to enjoy them. You would be a “fool to read short stories at night, or drunk,” he said. A short story requires work from the reader as there is “not much there” to make up the action. All three speakers agreed it didn’t provide the escapism of the novel–a novel can have flaws but still be enjoyable.  If a story “smells bad,” said Stein, it is very hard to be forgiving. Despite the form’s challenges, when it goes right–and Object Lessons contains 20 great examples of it going right–the short story can “reproduce the world,” said Antrim, with a perfect snapshot.

Since the book’s aim is to encourage people to read short stories, at any time of day, and I later asked Stein what Brooklyn-based story he would recommend:

“Bernard Malamud was born and raised in Brooklyn, and it shows up in lots of his stories. My very favorite of his Brooklyn stories is ‘A Summer’s Reading,’ about a young high school dropout who gets the reputation of a bookworm. I love the way Malamud captures the loneliness, vulnerability, and shame that this young unemployed guy feels. That part of the story always seems fresh to me. I also love the way it captures that historical moment, right after the War, when to be a ‘reader’ was part of the American Dream, a way to better your lot in life and make the whole neighborhood proud.”