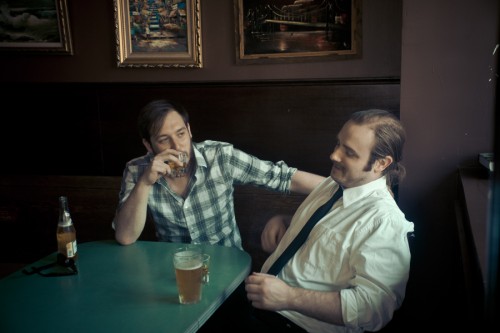 One random Saturday night back in July, I got a text from my funniest friend, a rising star at Upright Citizens Brigade named Diana Kolsky, inviting me to a comedy show around the corner from my apartment. The invitation was nothing unusual–Diana knows I am always up for seeing live comedy–but the address she sent was a surprise. No disrespect to my little slice of southern Gowanus, but the nabe is more about car repair shops and Sons of Anarchy-esque motorcycle activity than it is about launching the next Comedy Cellar or Catch a Rising Star. My boyfriend and I had joked more than once about the unfortunately named Big Sasco Tool Rental being our local hangout, and yet now here we were, climbing the nondescript stairwell above it at 10pm. When we flung open an unmarked door on the third floor, running late as usual, we were unceremoniously deposited into the middle of a standup set being performed by the very funny Annie Lederman in the unlikely setting of a stranger’s one-bedroom apartment. There was a very uncomfortable silence, during which the 25 or so people sitting on furniture that had been pushed to one side of the room stared at us as we sheepishly tried to slink to the corner. In a traditional comedy club, we might have been subjected to merciless heckling, but Ms. Lederman laughed and told us not to worry so we sat on the floor and settled in to enjoy the show.

We had stumbled- quite literally- into The Whiskey Tango Living Room Tour, an innovative traveling comedy experience that brings professional top-shelf standup and sketch performances to the most intimate setting possible: your own apartment. The concept, which is the brainchild of a local multimedia sketch comedy team called The Dependable Felons, is brilliantly simple: you book a date, offer up your space, and put together a guest list of your comedy-loving friends. In exchange, Tango provides a free bartender and booze (Bushmills is a sponsor), sound and lighting equipment, and–most importantly–up and coming comedic talent that you would otherwise pay good money (plus a 2 drink minimum) to see anywhere else. The show I caught in July featured 3 legitimate minor celebs in the New York City comedy scene: Lederman, Dan St. Germain, and Chris Gethard, plus a screening of a few video sketches made by the Felons. It ended with everyone, including the performers, repairing to the rooftop to hang out and talk under a glowing moon with the Manhattan skyline in full view.

There is admittedly an initial awkwardness that permeates the experience, and this would be the case even if you didn’t totally disrupt a set by barging in like an animal well after it had started. It’s NYC, and apartments are small, hot, and full of things like framed photos of grandparents and dishes drying on the dishrack. With no elevated stage, floodlights, or significant physical space between the comedian and the audience, there is an unsettling amount of direct eye contact. Once the weirdness wears off and everyone settles in, though, something really cool happens. The pros shake it off and hit their stride, and you, the audience, suddenly find yourself with a unique opportunity to observe the art of making comedy, distilled to its purest form. It’s a welcome change from the tiresome pretentious and self-congratulatory vibe that has become de rigeur in the “comedy nerd” world, where podcasts that are basically hour-long recitations of inside jokes between comics are the norm.

Murf Meyer and James Chupka, the duo who make up The Dependable Felons, sat down with me recently and explained that their goal in creating Tango was precisely to make comedy more inclusive for people who aren’t already ensconced in the insider scene of UCB or The Pit. Both grew up in Wilkes-Barre, Pennsylvania, and Murf made a strong impression on James, who was a few years younger, when he showed up at a high school dance in a purple leopard-print suit with a tall blonde on his arm and a flock of people around him. “That, by the way, was my peak,” Murf interjects drily. James later donned a pink and maroon tux for his prom as an homage to Murf, but it wasn’t until a few years later that they met again in Philadelphia, where Murf was honing his comedy chops and James was working in film, and they decided to join forces. They both fondly remembered growing up in a community of “working-class to kind of poor people” where weekend evenings were spent with families and friends gathered in someone’s house telling stories and laughing together.

“You know,” James explains, “it’s Uncle Rick telling that same bullshit Best Buy story over and over–that’s what we want, a rotating cast of Uncle Ricks.” This loose, accessible, and collaborative atmosphere defines Tango shows, which often end with an impromptu dance party or a bunch of people from different social circles sitting around and bullshitting with one another (if you can’t get 25 friends to show up, Murf and James know plenty of cool people who will fill the gaps).

Throwing a Tango party is completely free and, according to the boys, “a minimally invasive procedure.” They will even take care of the clean up, although they acknowledge that they might leave some equipment behind until the next morning, “depending on how well the show goes.” The only requirements are a space that can fit about 35 people, an appreciation for comedy, and “the willingness to throw a party and up the ante of that party.” Murf is only kind of joking when he says that the plan is to “slowly bring the show to every apartment in NYC.” Yours should be next–it will definitely be a night you and your friends will not forget.

If you want to host a Tango party, email the Dependable Felons at whiskeytangotour@gmail.com.