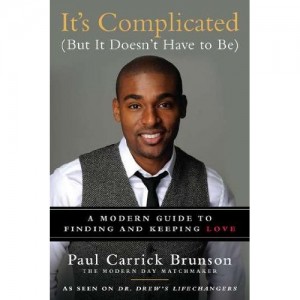 I hated dating in New York. Maybe I should be more specific–as a hetero woman, I hated dating men in New York. I don’t know if it’s better anywhere else, but I suspect it is easier to find nice men in a city where people work less and where the ratio is not so out of whack. (There are nearly 10% more women than men in NYC–in L.A., the ratio is more or less even. Have fun plotting your next move here.)

Unless you are planning on packing up for the West Coast, though, there is no way out of dating hell other than trial and error. Tonight offers another one of those trials, for those who bought advance tickets–a sold-out party at the Green Building to celebrate the release of professional matchmaker Paul Carrick Brunson’s new book It’s Complicated (But it Doesn’t Have to Be): A Modern Guide to Finding and Keeping Love (Gotham Books). The event, which includes some live music and advice, is being thrown in conjunction with the New York Urban League Young Professionals, so presumably it will attract only employed, or highly employable singles (most of them female). But therein lies part of the problem, according to Brunson–if you’re pessimistic about dating, then you’re not going to meet anyone. Below he offers some more love advice, all slightly Rules-like, but helpful reminders that dating is SO HARD, there is an entire industry dedicated to making it suck a little less.

The Male-to-Female ratio is sadly in men’s favor in New York, so I’m curious: How can a nice girl find a decent man in this town, who isn’t noncommittal or always looking over his shoulder for a better catch?

As Jay-Z likes to say, numbers don’t lie! In NYC each year, over 75,000 marriage licenses are issued (10% going to same sex couples) so this shows us that people are getting married! The best advice I can give is not to allow the media’s hype of “relationships suck and you’ll never get a man” get to you. And that’s truly the best initial advice I can give. Your belief is your reality. If you change your belief system to “NYC is a fun place to date, there are many good men available, etc.” you’ll quickly find your results will also change.

What are the best places to meet someone in New York?

There’s not one place that is the mecca of singles, however, there are definitely better places than others. In this list I wrote for essence.com, I include my ten favorites. [Note: if you don’t feel like clicking through to the slideshow, “an educational setting” (i.e., cooking classes) and “a volunteer project” top the list.]

What are some of the worst things you can do or say on your first date?

Here are my top 5:
1) Show up late.
2) Leave your cell phone on the table.
3) Not pay (if you’re a guy).
4) Get slammed drunk.
5) Give’em some action (any kind of sex). Statistics show they ain’t calling you back if you do (and stats also show you stand a greater chance of getting an STD on first-date sex).

A quick Google search did not lead me to this first-date sex stat, but there is a drug-resistant strain of gonorreah going around. So if you haven’t had sex in a while, think about that–at least you don’t have the gonorrhea superbug!