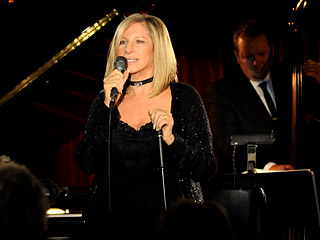 If you can deliver an amazing impersonation of Babs, you could win tickets to her sold-out show on Saturday

Before Beyonce, Madonna or Britney, there was Barbra. As in Streisand if you’re a stickler for surnames. Babs is back in Brooklyn (the star was born here in 1942) for a two-night engagement at the Barclays Center. Her first sold-out show is tonight followed by an encore performance on Saturday. Despite her career spanning more than five decades, this is the first time Streisand’s performed for her hometown crowd–if you don’t count her singing in the Erasmus Hall choir when she was in high school. With whispers of this latest tour possibly being the last for the 70-year-old singer, die-hard fans of the funny lady like Darren Lucey, owner of Lucey’s Lounge, a cocktail bar on Third Avenue in Gowanus, are making the most out of her return by hosting special events in her honor.

Lucey, who has tickets to tonight’s show, turned his lounge into a piano bar Tuesday and Wednesday night this week for a singalong of Streisand standards. The dimly lit bar was the perfect setting to pay homage to the singer who got her start on the West Village cabaret circuit during the 1960s. On Tuesday night, Streisand’s many incarnations stared down at the crowd from the covers of her vinyl records, which were pinned to the walls around the piano. There were funny girls, and funny ladies, brooding Barbras and more than a few profiles of that famous nose. In the center was a framed silk scarf screen printed with images of Streisand on loan to Lucey from his friend Tom Fagan, another uber fan of the performer.

It was clear talking to Lucey Tuesday night that his love affair with Streisand has burned steadily for years and extends past seeing her in concert.

“I have her home phone number,” said Lucey, who procured it while working as a production coordinator for a film with her husband, James Brolin, a few years ago. “I had to call him, so I called up and said ‘Is Mr. Brolin there?’ and she says ‘Hello?’ and I’m thinking to myself ‘No that wasn’t. Answering her own phone.’ All of a sudden she yells out ‘Jimmy’ and I’m like ‘Oh my fucking god, I’m talking to Barbra.’ ” Lucey hasn’t let having Streisand on speed dial go to his head, however. Though he has considered giving her another call. “One of my thoughts was that I might even call her from the concert and leave her own voice on her answering machine. But then I thought ‘OK, that’s a little stalker-y.’”

Also attending the concert tonight is Fagan, a florist in Manhattan whose tickets tonight were a gift from his boss for his 55th birthday. He hasn’t missed a Babs concert in the city in 20 years and will see her both nights at Barclays. To say he’s excited is an understatement. Before heading to Lucey’s Tuesday night, he flyered the neighborhood with “Welcome Back Babs!!!!” posters he’d made himself. “This has gone on since I was a kid and my mom introduced us to her recordings,” said Fagan, who like Babs was born in Brooklyn. “I think she’s a tribute to Brooklyn. She is a world-class entertainer.”

Those who weren’t able to make it to Lucey’s earlier this week should fear not. There’s still a chance to celebrate Streisand on Saturday at Albee Square where The Downtown Brooklyn Partnership is hosting a Barbra Streisand Impersonators contest. Registration starts at 3 p.m. with the contest starting at 4 p.m. First prize is tickets to Saturday’s concert.