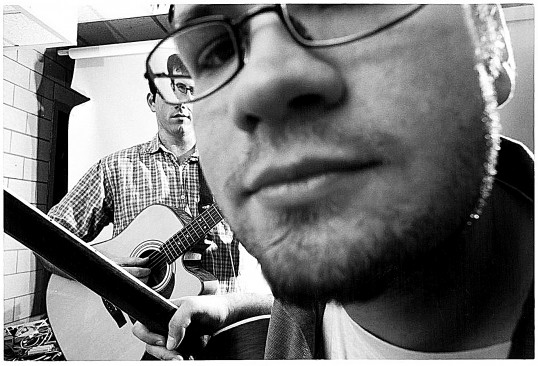 With a combination of energetic catchy melodic rock and sophisticated lyrics, The Ampersands have a sound that is reminiscent of Big Star, the Posies and many other power pop bands past and present. However, The Ampersands’ co-founder, Aaron McQuade, says the influences of the group–which includes him and Jim Pace–dates back even further before those aforementioned bands.

“For [Jim], it’s about the Beatles, Paul Revere and the Raiders,” the Brooklyn resident tells me. “For me, it’s Hendrix, the Monkees, Paul Butterfield–the bluesier end of ‘60s rock. I’m actually also very influenced by the jam bands of the era. I’m a huge Grateful Dead fan. Melodically they’re a huge influence on me–and as a bassist, Phil Lesh is one of my influences.” 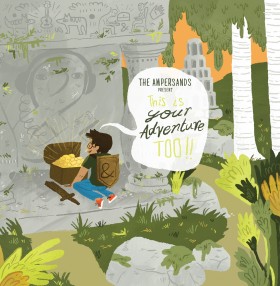 After a four-year hiatus between albums, the New York/Rhode Island group returns with a brand-new record, This Is Your Adventure Too, the follow-up to their debut And.  Asked why the long gap, Aaron, 36, explains in one word: babies. “Jim had his first baby a few months after And came out; I had mine last December. The other thing [is] he moved back to Rhode Island, so we went from being in the same city to having to do things long distance. And then family intervened as well. There were a few periods where we worked pretty steady for a week at a time or so, but those were several months apart.”

Like And, the music on This is Your Adventure Too contains one exquisitely crafted melodic track after another. Yet Aaron explains of the different approach used for the new record compared to the previous one.

“The first record we did with [producer] Bryce Goggin,” he says, “that was a very sort of stripped-down garage ‘60s pop style sound. It’s very raw-ish. This one, we wanted to do something a little more complex with more overlapping bits and interconnected pieces—this was done a lot more on purpose stuff than that was. Every guitar part fits some puzzle piece–this is almost like a game of Tetris where you got so much space to fill up sonically, ‘let’s cram as much as we can in there.’”

And while the music from This Is Your Adventure Too is catchy on the surface, the lyrics convey a serious mood inspired by real life; Aaron cites feelings of frustration, bitterness and abandonment as examples. “This album is a lot about trying to put the best face you can on a bad situation or a situation that seems bad and trying to make something good out of it,” he says. “Thematically, there were a few things that we left off that we recorded for it because they were too happy lyrically. Some of the stuff dates back more than ten years as far as when the songs were written and some of them written last year. A couple of them [like] “October” tells the story of the making of this record… ”

The upbeat rocker “Try This,” one of the tracks from the record, started out as a hipster put-down song, according to Aaron. “The chorus was intended sarcastically because if you try something, you won’t know if it’s cool. You’ll only know if it’s cool by looking at other people. So trying something for yourself doesn’t help you. The line, ‘Do you really like it or is it because you just want to look like somebody who does,’ is kind of angry look at the Williamsburg scene when I moved down here seven years ago. As I was working on it, I started to realize there were lessons in there that I could take for myself–take more risks and be a little more freer with what I was doing.”

The jewel of the record has to be the lovely six-minute-plus ballad “Alsace Lorraine.” With its extended instrumental part in the middle, the track sounds like a cross between a ‘50s pop song and the British ‘80s group Prefab Sprout; it also features beautiful backing singing from Aaron’s wife Evie. “That is really about when one person abandons another,” Aaron explains, “and the other person is like ‘Well alright, I’m gonna do it anyway, I’m gonna be better.’ I went through a divorce about seven years ago and this came out of that. This one’s very personal and it is sort of the story of moving on.”

Hailing from Rhode Island, Aaron says he has been playing music for most of his life, including for almost 20 years with Jim back in junior high school. “I brought my keyboard over to his house, and he played the guitar, and we played some Beatles songs,” says Aaron. “We’ve been playing together since we were in our early teens. We’ve been in different incarnations of the same band. There was basically one other band where I was the guitarist and he was the bassist. But other than that, it’s one band, it’s been the two of us as co-lead singers and multi-instrumentalists.”

A gay-rights activist who works for GLAAD, Aaron says he would like The Ampersands to perform again as they haven’t done so in a while–although at one show, Aaron did play all the instruments himself a la Dick Van Dyke in Mary Poppins. “I’m still not sure what shape that’s gonna take,” he says, “whether we’ll try to put a full band together , whether we go up and do a karaoke style with some backing track, or whether we’ll just [use] two acoustic guitars and do it that way. Unfortunately a lot of the songs on this record were not built for live performance by just two guys.”

As for the next record, Aaron hints that it won’t take that long to follow-up This Is Your Adventure Too compared to And—he says he’s already worked on half of the songs for that effort. “Now that we’ve each got a kid out of the way…seeing the response to this one has definitely motivated us to get out and get moving again. The next one will come out with a lot less space than this one was. We’re hoping for early to mid-next year.”

The Ampersands’ new record, This Is Your Adventure Too, will come out on Oct. 30. For information on The Ampersands, visit their Facebook page.