Last month’s Brooklyn History column on Prospect Park was one of the most popular to date. In writing it, Allison Meier discovered a park specimen with a rich story of its own… 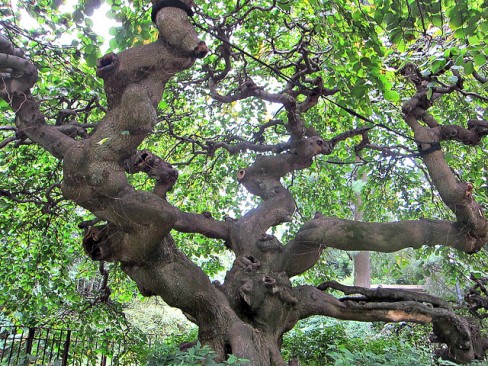 Under the canopy of the Camperdown Elm today. Photo: Allison Meier

When Prospect Park opened in 1867, a regular Noah’s Ark of flora and fauna came squawking, snuffling and swimming through the door. Inspired by the elegant new green space, locals donated an incredible menagerie to fill its fields, ponds and vales. Once called “Brooklyn’s crowning curio,” the Camperdown Elm may just be the most remarkable living gift the park has ever received.

“In 1872 alone the [Brooklyn Parks] Commission received gifts of deer, cattle, swans, trout, even squirrels,” Amy Peck, archivist and historian at the Prospect Park Alliance, told Brooklyn Based. “Maples, lindens, larch, and birch trees were donated as well as the ‘singularly curious weeping elm’ that had been created from a bit of a tree in Scotland.” 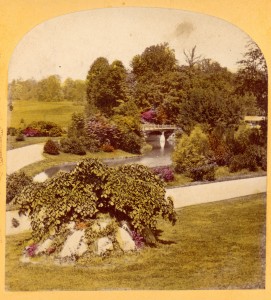 The Camperdown Elm, which is located near the Prospect Park boathouse, was a gift from a man named A.G. Burgess and was planted in 1872. It’s one of only a few surviving trees in the world grafted from an elm on the estate of the Earl of Camperdown in Scotland. It’s unique in that it cannot reproduce by itself, and its branches grow nearly parallel to the ground.

Prospect Park’s elm grows in a proudly strange way, with crooked flourishes, twisted like a giant bonsai. Yet like an ornamental bonsai, the Camperdown Elm requires more care than most trees, and by the 1960s it was in such bad health that it was almost chopped down. A massive gouge in its trunk was poorly patched with crumbling concrete, and ants and rats had burrowed holes through its body. Its savior came in the form of award-winning modernist poet, and Brooklyn resident, Marianne Moore.

“I think of the Camperdown Elm as a living link to two periods in the history of Prospect Park,” said Peck. “Almost a hundred years [after the planting] both the elm and the park were showing their age in alarming ways. In a large park of general disrepair, this particular tree’s plight caught the eye of Marianne Moore. The poet’s public entreaty brought restoration to the elm. This success inspired others to give, rather than animal and plant specimens, the renewed appreciation and persistent advocacy that sparked a renaissance for all of Prospect Park.” 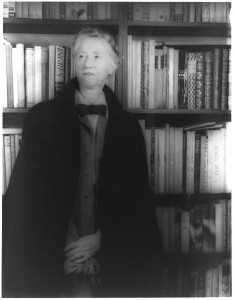 Moore was 78 years old, with both a Pulitzer Prize and National Book Award to her name, when she was made president of New York’s Greensward Foundation in 1965, an organization dedicated to the promotion of parks, particularly those designed by Frederick Law Olmsted. Inspired by the dire condition of the tree, she sponsored the creation of a group called Friends of Prospect Park to protect it and the other trees rooted in the park’s 585 acres.

With public support and funds, the Bartlett Tree Experts, an internationally renowned tree-care company, were employed in 1967 to treat the tree for its many ailments. According to a 1995 article in Tree Topics, a Bartlett-published newsletter, the Bartlett employees who worked with the Camperdown Elm were “horrified at what they found during their first inspection,” but through over a decade of work they instituted many careful and intricate solutions to its problems. They filled 12 large cavities as well as six smaller holes in the tree, removed dead wood, added a drain tube “to treat the slime flux problem,” and installed a system of cables and rods to support its branches.

Those efforts paid off, and today the tree looks stronger than ever, now circled by a protective fence, although you can still lean over to gaze into the distorted canopy of branches. Moore’s exuberance for the preservation of the historic and rare elm did not end with her death in 1972. She left behind the Marianne Moore Remembrance Fund to continue to promote preservation of it and other trees in Prospect Park.

The Earl of Camperdown moved to Boston in his later life, dying with no children to inherit his title; in a way, only the trees were left to carry on his name. The tree itself has at least one local descendent. According to The Complete Illustrated Guidebook to Prospect Park and the Brooklyn Botanic Garden published in 2001, a Camperdown Elm in the Brooklyn Botanic Garden is a direct relative of the one in Prospect Park. Unlike the Prospect Park tree, it was “grafted onto a taller trunk and so can do without the hillock that enables the branches of its park cousin to clear the ground.”

Yet the greatest legacy for the stooped tree may be Moore’s 1967 poem which immortalized it forever.

I think, in connection with this weeping elm,
of “Kindred Spirits” at the edge of a rockledge
overlooking a stream:
Thanatopsis-invoking tree-loving Bryant
conversing with Thomas Cole
in Asher Durand’s painting of them
under the filigree of an elm overhead.
No doubt they had seen other trees—lindens,
maples and sycamores, oaks and the Paris
street-tree, the horse-chestnut; but imagine
their rapture, had they come on the Camperdown elm’s
massiveness and “the intricate pattern of its branches,”
arching high, curving low, in its mist of fine twigs.
The Bartlett tree-cavity specialist saw it
and thrust his arm the whole length of the hollowness
of its torso and there were six small cavities also.
Props are needed and tree-food. It is still leafing;
still there. Mortal though. We must save it. It is
our crowning curio.
— Marianne Moore

Leave a Reply to Gary Glazner