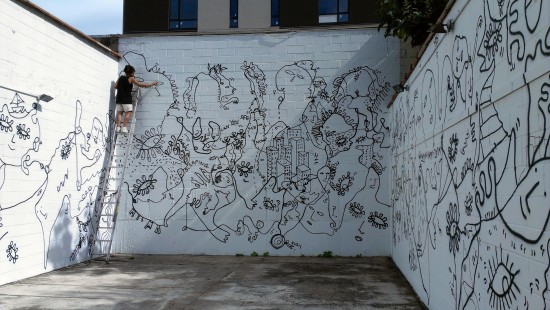 Lines are tricky geometries. We write on lines and stand in them; we use them to measure and divide. They can bridge two disparate points, or just as easily, they can segregate and exclude.

Yet the lines of visual artist Shantell Martin slyly dodge such politics, running footloose and
fancy free into a fantasy world of surrealist play.

In Williamsburg’s Black and White Gallery, the artist’s lines parade across the walls and into the back courtyard, arching into towering cities that overflow with fanciful characters. For Martin, no surface is out of bounds. She draws on spray-painted animal skulls, recycled milk bottles and even post-its. Indeed, her ambitious vision seems to thrive when the constrictions of frames and corners fail to be a threat.

“Continuous Line” is her first solo show in the city, and is an ode to the black Staedtler
Lumocolor pen with which the now Brooklyn-based artist began. (Martin was raised and
schooled in London.) Over the past few years, Martin has garnered international acclaim for her
live light projections at both MoMA and the megaclubs of Tokyo. Using a digital drawing tablet,
the artist’s neon-colored gestures are projected onto a theatre-size screen, usually to be danced to
or sung in front of by children and adults alike. She’s even had her bedroom—the walls of which
are covered with her own meandering art work—featured in the New York Times. But with a strict palatte of black and white, the current Brooklyn show maintains a feeling of intimacy, as if we have stepped into a life-size version of the doodles that run through her sketchbook.

Some have described Martin’s drawing technique as “free association,” due both to its ephemeral
lifespan and the way her subject matter seems to bounce from one chimerical association to
another. In one section of “Continuous Line” for instance, an electric drill emerges from a
mountainside cliff, the outline of the drill bit transforming into the infamous phrase “Drill Drill
Drill.” Follow the line downward and it turns into the profile of a giant’s sleeping head, travel
upwards and it becomes the silk of a spider web.

Yet the value of her work is not all on the surface, and carries within it a reflexive depth. She
merges text into her work the way a deejay might sample lines from another’s song, using short,
deceptively simple phrases in twisted repetition. Tiny poems are tucked into crevices that engage
the viewer in a kind of Steinian word play, making requests like: “Sit by the see with me watch
the see move out and far.”

What fills the blankness left behind when a black line slices through space? Inquisitive
imagination, Martin seems to be saying, and of course, many, many other lines.