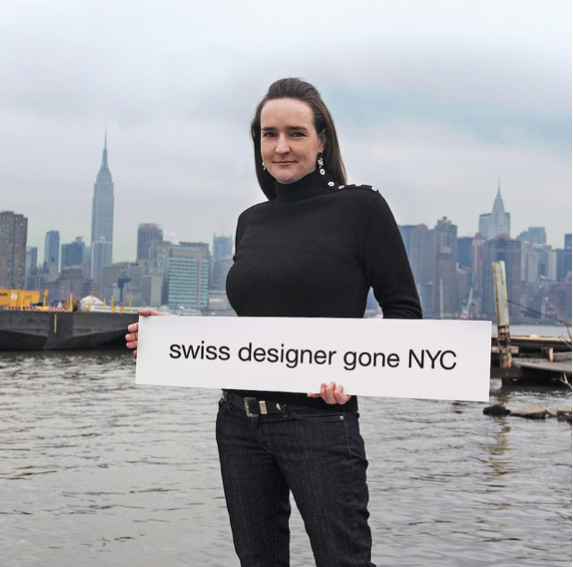 On one of the first frosty mornings this October, the line weaving its way through the revolving doors of MoMA’s Roy and Niuta Titus Theaters consisted of 450 creative types—give or take a few lost tourists attracted by the crowd—waiting to hear a lecture by Maira Kalman, an illustrator best known for creating a dozen New Yorker covers, as many children’s books and two columns for The New York Times. They were rewarded for their early morning efforts with a free breakfast of coffee, croissants and muffins, which they munched in an antechamber before heading below to take their seats in Theater One. In a spin on an ice-breaker name tag, each wore a white sticker filled in with his or her Twitter handle and answer to the question: “What’s the one thing you can’t live without?”

For 30 minutes, Kalman talked about her work and offered words of wit and wisdom for finding longevity and happiness working in a creative field. After she answered audience questions everyone left as quickly as they’d arrived, presumably on their way to work.

It was the latest in a series of free, monthly breakfast lectures known as CreativeMornings, founded by Swiss designer Tina Roth Eisenberg at her Brooklyn studio in 2008. “I felt like the conference world was broken,” says Eisenberg. “It was either too expensive or too elitist. There needed to be something more accessible.”

“It comes very naturally to me to fix something I feel is broken,” she explained. “When I think I can make something better, I just do it, and I want to do it having fun.”

If product development and problem solving are her idea of a good time, then Eisenberg must be having a ball. Over the past seven years, she has launched a series of successful business ventures aimed at troubleshooting issues in her own life as a designer, wife and mother living in downtown Brooklyn.

Having grown up in Speicher, “a teeny tiny town” in Switzerland, Eisenberg studied design in Geneva and Munich before moving to New York in 1999. In person, she is affable, engaging and quick to laugh. The minimalist aesthetic that’s a signature of her design work, which landed her positions at design firms like Thinkmap and freelance work with the Food Network and MoMA before she stopped taking on clients to concentrate entirely on her own projects, is reflected in her paired-down ensemble of dark denim jeans, a black and white striped sweater and rimless eyeglasses the first time we met at her studio in September—a signature look I saw in various iterations over the next few weeks. Her chestnut-colored hair hangs around her shoulders still damp from the shower, and is left to air dry during her walk to work. A gold plate baring her “@swissmiss” Twitter handle in script is suspended by a gold chain around her neck.

Sitting down at the white folding table in the center of her studio, she offers to break an obscenely large loaf of challah bread with me while we discuss her evolution as an entrepreneur. Someone has sent the loaf to her hoping she’d feature their company on her beloved design blog, swissmiss. The blog started out in 2005 as a place for her to collect her thoughts, but now functions as a launching pad for her projects, as well as those she admires enough to introduce to the one million unique visitors swissmiss averages every month.

Eisenberg runs swissmiss from of her studio at 10 Jay Street, a catacomb of commercial spaces occupied by creative companies, start-ups and recording studios that is as down under the Manhattan Bridge as it gets without winding up in the East River. The panoramic views from Eisenberg’s studio capture most of lower Manhattan. “I call it my happy place,” she says taking in the space with the same appreciation as someone seeing it for the first time. Since settling into the building’s sixth floor a few years ago, she’s piecemealed together three separate studios by breaking down their dividing walls to create one expansive loft space. The end result is impressive. The whitewashed walls are a blank canvas broken up by burst of color coming in the form of blood-orange accent pieces like the chairs dotted along the desk spaces and a collection of books arranged in color order on a shelf behind our heads. A wall-sized photo of a woman’s tank top-clad upper torso leans against the wall by the entrance. The image, a photo of a summer intern, could easily be called “The Girl With the Micro Tattoos,” as her arms, chest and neck are completely covered in a hodgepodge of tiny temporary tattoos from Tattly, another of Eisenberg’s businesses. 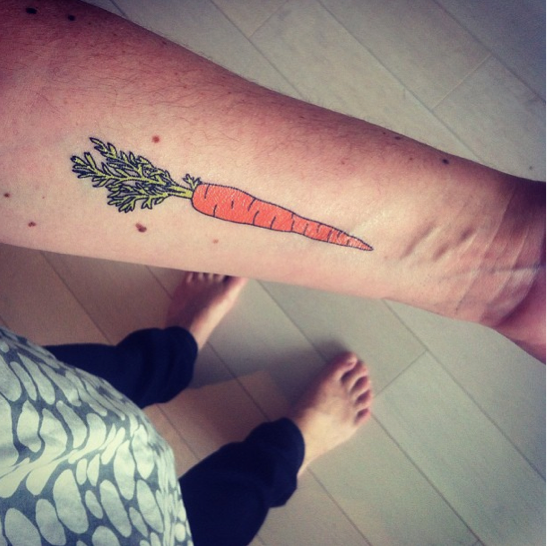 “My daughter would bring home these really ugly temporary tattoos,” explains Eisenberg. “I realized I needed to either stop complaining or do something about it.”

With Tattly, Eisenberg turns the drawings of professional designers and illustrators into temporary tattoos that are as flattering as they are fleeting. These are not the kind of clip-art looking creations you’d find in a box of Cracker Jacks, but rather wearable works of art. The number of designs offered has ballooned in number from five to 250 since Tattly started in July 2011. They include sweet treats, sailor insignias, a menagerie of animals, affirmations, ironic statements, classic cameras, robots, rainbows, bikes, watch bands with faces that read “Late” and a surprising number of bunnies—they appear to populate as rapidly as temporary tattoos as they do in real life. Kids (and kids at heart) can’t seem to get enough of the ephemeral artwork, which sells in sets of two for $5 or 8 for $15. Millions of tattoos have already been sold in over 90 countries worldwide. The overwhelming response to Tattly has even earned Eisenberg wide popularity on the playground circuit. “I always have this metal tin can with me filled with Tattly wherever I go,” says Eisenberg, who has two children under 10 years old. “When I walk onto the playground kids come up to me, and I don’t even have a jingle. I should have a jingle like the ice cream truck.”

Over time, Eisenberg has taken over additional studio spaces on the same floor as the swissmiss studio to house both Tattly’s headquarters and the collaborative work space she started called Studiomates. Nearly 40 designers, illustrators, bloggers, writers and developers share a studio space catty corner to Eisenberg’s own. The co-working concept combines the freedom of self-employment with the comaraderie of an intimate office environment, saving each studio mate from the isolation or excessive overhead costs of going it alone; everyone pays $500 a month for their workspace.

The close proximity of so many creative types is a breeding ground for big ideas. One was Eisenberg’s first iPhone app, TeuxDeux, a to-do list app with all the hallmarks of her minimalist aesthetic that makes organizing your life so simple and transparent users might actually mark things off their lists. The app even includes a section called the Someday Bucket, which seems a particularly fitting touch for the creative types, a tribe chronically prone to procrastination. TeuxDeux came about from a collaboration between Eisenberg and Cameron Koczon, a developer for Fictive Kin and Studiomate. “I couldn’t find a to-do app that worked for me, so I made my own,” Eisenberg says. “It was never intended to make money, but everyone kept screaming for an iPhone app. I believe if you do something that hits a nerve with people, it automatically will generate money.” 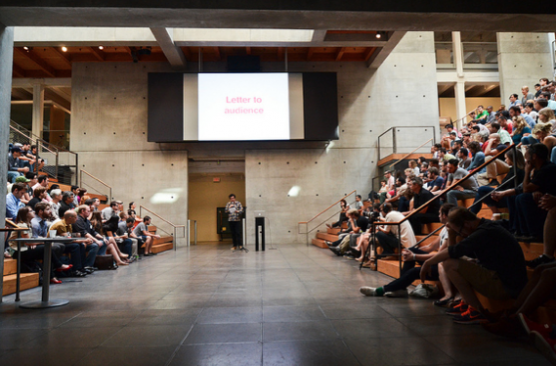 A CreativeMorning in Portland, Oregon.

The biggest nerve Eisenberg has hit so far has been CreativeMornings. It now boasts chapters in 38 cities and counting on six continents. Tickets to the discussions, which are free, sell out faster than a Madonna concert. September’s lecture involved a field trip to Governor’s Island in a rainstorm to hear Anne Frederick, from the lower Manhattan design/build non-profit Hester Street Collaborations, talk about her approach to urban renewal in underserved neighborhoods in New York City. It sold out in two minutes. Two weeks later, I found myself on the waiting list just 10 minutes after tickets became available for Kalman’s discussion at MoMA. CreativeMornings typically happens in the Galapagos Art Space in Dumbo, but if my own experiences over the past few months are any indicator, people are willing to battle both the elements and morning subway commutes to attend the morning meetups no matter where they transpire.

To make CreativeMornings’ content more accessible to everyone, especially those not able to score a coveted ticket, Eisenberg launched a Kickstarter campaign this September to raise $35,000 to build a new website. She reached her goal in three hours and went on to raise nearly $80,000 in total to create the site, which will include a video archive of discussions from all the chapters around the world. “It’s going to be a hub for everything CreativeMornings in terms of content, in terms of signing up, in terms of finding out where the next one’s at, in terms of how to become a host,” Eisenberg says of the blueprint for the new site, which she doesn’t expect to be up until sometime next year. “There’s so many facets to it. It has to satisfy a lot of different needs.”

In the meantime, Eisenberg is busy giving CreativeMornings a makeover she hopes will strengthen community ties between its various chapters and lend it a stronger voice in the creative world at large. “We’re changing up the format starting next year,” she says. “Starting in January, we’re going to have a theme every month. Every chapter around the world will speak on a topic. Now, we’ll be these local chapters contributing to this larger global conversation, which is so powerful.” January’s theme is happiness, fittingly enough. It will be followed by money in February. “We’re going by seniority of the hosts, so every chapter will own a themed month at some point,” she explains. “If this is a topic that interests you, you’re going to have 36 talks from around the world to listen to.”

Despite having it in spades, Eisenberg’s success still surprises her. “Had I known it would get this big, it would have freaked me out,” she says. For now, she prefers to stay focused on the present. When asked if she has any future plans for further projects, her answer was emphatic: “Oh my god. Not right now. I’m maxed out. But I know that once CreativeMornings is on the next level, with the new site up, I know I’m going to get the itch again to say ‘Alright, what’s next?’”