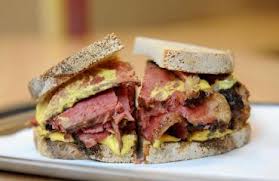 Is this Jewish food?

Tonight, as part of Congregation Beth Elohim’s new reading series, Brooklyn By the Book, chefs and business partners Yotam Ottolenghi and Sam Tamimi will discuss their new book, Jerusalem: A Cookbook, which examines their shared food traditions and culture. Ottolenghi, a Jew, and Tamimi, a Palestinian, met in Jerusalem, and have a hugely successful chain of restaurants called Ottolenghi in London. The book seems to be on the tip of everyone’s tongue right now, and it got me thinking about the recent surge in food specifically identified as being “Jewish.”

Growing up in a kosher-keeping conservative Jewish family, kosher food is something I have, at times loved, and at times reviled. Going into a public school lunchroom during Passover with a clumsy matzoh-for-bread turkey sandwich, is about as embarrassing as life can get for a 4th grader. Yet, I truly pity anyone who has never had challah bread stuffing on Thanksgiving.

In recent years, I’ve grown to embrace Jewish food in its many forms, from the small plate of gribenes (crispy fried chicken skin) they serve in lieu of bread at 2nd Avenue Deli to the more hip grass-fed, farm-to-table spots with seasonal menus like Brooklyn’s Pardes (especially their Beef Tongue and Onion Ring). There’s a slew of new restaurants throughout the five boroughs that just happen to apply new ideals of the foodie movement to Jewish food. As a result, some of the most sought after food spots in Brooklyn are those that specialize in “Jewish Food.” Whatever that means.

I’ve documented the wave of new Jewish Food that has hit Brooklyn over the past few years writing for Jewcy. Shelsky’s smoked fish in Cobble Hill, Mile End Deli in Boerum Hill and Traif in Williamsburg have all opened to much fanfare and they all strive to pay some homage to Jewish food–in very different ways. However, those homages seem to differ from restaurant to restaurant. Those disparate approaches to modern Jewish cuisine, came up at The Future of Jewish Food, an event I attended a few weekends back. Hosted by Tablet Magazine, gatekeepers of the Jewish intelligentsia, along with Mile End Deli, the gatekeepers of Jewish gourmand-ism, at ABC Home, the gatekeepers of secular furniture, underscored the interest in Jewish food that I’ve been noting for some time, and explored the questions inherent to defining a cuisine that can be found all over the world, with very different local and cultural influences.

One of the first topics to come up at Tablet’s event was the issue of “the rules,” or “to what extent is kosher important in identifying food as being Jewish?” The panel, which was moderated by Joan Nathan, the author of the cookbook, Jewish Cooking in America; and included Gail Simmons, Top Chef host and author of Talking With My Mouth Full; Mitchell Davis, vice president of the James Beard Foundation; Jordana Rothman, food editor at Time Out New York; and Josh Ozersky, Time Magazine columnist all of whom were quick to acknowledge the importance of “the rules.”

While places like Mile End or even the very classic Katz’s Deli don’t actually keep kosher, newer places like Traif actually go so far as to mock the very notion, mixing traif (non-kosher food) with classically Jewish dishes, with (often delicious) results like chopped liver and bacon. A few of the panelists were openly dismayed by Traif’s play on modern Jewish food, not finding their culinary joke funny at all.

But what other “rules” are up for debate? Are farm-to-table or organic standards in conflict with kosher standards? Or Jewish cultural standards? Well, part of the point of kosher meat is killing an animal in the most humane way possible. The animals’ living conditions and humane slaughter are primary concerns in the kind of organic, local and responsible meat production that foodies embrace, as well. Therefore it would seem that the two make could make excellent bedfellows. Whether or not the more logical approach to organic and the more theological approach to kosher will manage to coexist, only the future will tell.

There is, it seems, a movement among young Jews, like Noah and Rae Bernamoff, who were passionate enough on the subject to open Mile End Deli and to write The Mile End Cookbook,  toward the food that resonates and connects them with their cultural past. In an especially sweet moment during the panel, Simmons described how thrilled it would make her grandfather-in-law, who recently died, to see that young people in Brooklyn were cooking and eating the Montreal-style smoked meat Mile End has made famous here. The food that once made us different now makes us especially proud.

Perhaps it is our tendency to gather these leaders of the Jewish food boom together and discuss its future. But, what’s most clear from the success of Traif, Shelksy’s, Kutchers, Mile End, Pardes and other relatively new Jewish food destinations in New York, is that the present is looking pretty good. It’s a good time for Jews, and Jewish food. While the future may be hard to predict, certainly there’s no reason not to get together and try to figure it all out…over some nosh.