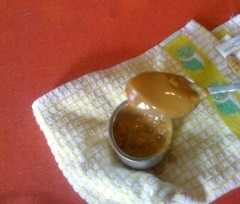 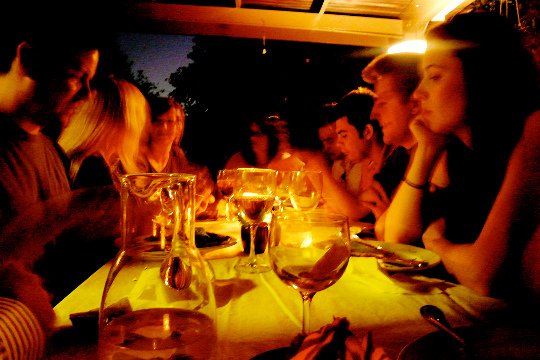 The key to a great dinner party: gathering your favorite people in one room. (Photo via The Kitchn)

Not long ago I had a bunch of people over for a meal that had me pulling charcoal-black chicken thighs from a cast iron skillet.  The evening also involved my smoke alarm going off and a portion of the guests rising from their seats to help me fan the alarm. I had decided to host because I wanted a distraction from my obsessive presidential poll reading. I got one.

“There’s something very intimate about a home, “ says Noah Karesh, co-founder of Feastly, a site that connects people through social experiences related to food. “People have 5000 friends on Facebook, but they are still eating dinner alone.” He calls inviting people into your home, especially if they don’t know everyone else there, “an act of trust.” Kim Severson, Atlanta bureau chief for the The New York Times and co-author, with Julia Moskin, of the recently published Cook Fight, has noticed another peculiarity–that New Yorkers may know all about cereal milk panna cotta and how to make their own pickles, but it’s still “a revelation when someone makes an actual dinner.” In all our chef and restaurant worship, it seems we’ve overlooked the art of entertaining at home with a meal that doesn’t require a sous vide set-up (or a sous chef).

Well, after my too-fried chicken experience, I wanted a revelation of my own. And with Thanksgiving approaching, it seemed that I wouldn’t be the only one searching for better, less stressful ways to invite people into my home for a meal. So I gathered some tips from seasoned hosts and cooks, then went ahead and invited some friends over for dinner. Here’s what I learned.

Menu Daydreams
It’s ok to be ambitious when you’re dreaming up what you might make. At least, in the beginning.

Severson says that when she plans her menu, she’s basically just thinking about what she wants to eat. “If I make something I like, it will taste better; I will be invested…If I’m kicking my own ass, I might as well do it for something I want to eat.”

For Ronna Welsh of Purple Kale Kitchenworks, this brainstorming period is about indulgence. Once you have your ideas in mind, she recommends bouncing them off someone whose taste you admire and “who wants you to pull off the party of your life.”

Most of the experts I spoke with said that hosts should always cook what they know for their parties–and that it’s when people attempt some new or fancy recipe that they run into problems. However, there are ways to combine novelty and fun with something within your skill set as a cook. If you do decide to venture into newer territory, limit it to a small portion of your menu. Maybe choose a dish that is richer and more decadent than you would make for yourself, but is a fairly simple recipe (like this ridiculously good caramelized garlic tart from the cookbook Plenty by Yotam Ottolenghi). Or, if can’t stop yourself from attempting something that you’ve never made, at least go for something hard to mess up, for instance a classic, slow-cooked dish that you can prepare well in advance.

Dulce de leche can be made well in advance and reheated. And it’s cool.

Praise for the Braise
Certain styles of food are just easier for dinner parties. Kate Payne, whose book The Hip Girl’s Guide to Homemaking champions creative ways to make living spaces cozy enough to entertain, advises staying away from dishes where, “everyone has to have their own piece of chicken.” For an easy, affordable one-bowl meal, she opts for soup and homemade bread.

Similarly, Kara Masi, host of Ted & Amy’s Supper Club, said that her most consistent crowd pleasers are dishes that do not need pan-searing, frying or sautéing near the end of cooking. Favorite entrees include roast chicken (“looks fancy”) and mussels (“so easy to cook, always affordable”). For desserts, Masi prefers pre-portioned desserts made a day ahead–panna cotta, cheesecake, flan–served in ramikens, which are cheap not very space consuming–so they are ready to go without fuss.

“Don’t discount the beef bourguignon” or a “lovely bowl of stew,” adds Severson, who is a huge fan of braising meats ahead of time–as is Tamar Adler, author of An Everlasting Meal. Addressing the wonders of slow-cooked meat in her book, she writes, “It will sit calmly, as everyone settles into the evening, and let you sit calmly with them rather than standing worriedly in another room.” 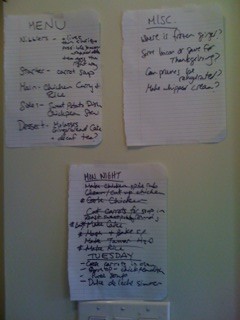 Prep lists are an essential tool for a smooth evening.

Prep, the Gift of Sanity
I know, I know. Everyone tells you to do some tasks ahead of time, but for hosting a big meal (and this is going to be especially helpful for Thanksgiving next week), it’s critical. Once you’ve combed through those beautiful cookbooks and daydreamed to your heart’s content, Welsh advises to take some, “nerdy, fastidious steps that a lot of people would avoid.” This means everything from creating a master prep list that merges the similar ingredients across your entire menu, to mapping out your prep schedule day by day (larger tasks first!), to thinking through your party all the way to the end–seeing for example, if you’ll have enough containers for your courses. (If you think you might come up short, she suggests putting post-its in bowls with the name of the dish that will soon be in them). Welsh’s tips make what you have to do visible.

Welsh says that the advance prep is “not just about frontloading the work.” As she explains on her blog, “If five recipes require onions, you want to clean your cutting board, sharpen your knife, and peel and slice them only once, rather than each separate time.” So, ultimately, it’s about having the work you do count for more than one dish, saving yourself time, and giving yourself “a load of sanity.” 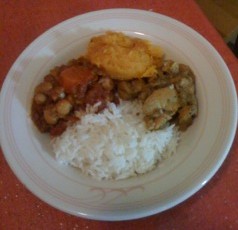 A Sinkside Set-up and other Social Tips
Dinner parties are all about bringing together your most interesting friends, right? Well, as much as you love them, part of your job as host is to smooth and cultivate the social scene, even if you think they can work it out themselves. Severson asserts that crowd control at a dinner party is key. For instance, making the most of guests who upon arrival, ask what they can do to help.

“Manage those people. That is essential,” she says, “Cope with them.”

She leaves small tasks for those guests to do, which is both helpful to the host, and makes the guests feel at ease and at home. Adler also purposely leaves some small tasks for her guests to do–picking herbs, slicing bread, and opening wine. She writes, “By letting people pick herbs or slice bread instead of bringing a salad, you make your kitchen a universe in which you can give completely and ask for help. The more environments with that atmospheric makeup we can find or create, the better.”

For Adler, this also extends to sometimes letting guests have at it if they offer to do the dishes at the end of a meal, “especially if there is flirting, “ she says. “A good place to set people up is at the sink.”

In terms of set-ups, Severson says there’s also nothing wrong with asking a good friend attending the dinner to be a plant–in charge of posing interesting questions if an awkward silence descends. And Payne says it pays to have someone else on the scene to co-host with you–to take coats, show people where drinks are, while your brain might be spinning. She also advises space-constrained New Yorkers to become friends with their neighbors, because you never know when you’ll need to borrow that extra chair.

Tease, Please–But No Cheese
When people arrive, give them something to eat. As Welsh puts it, “not something that fills you up, but something that teases you.” She doesn’t see the point of cheese plate at the beginning of the meal because it’s filling your guests with what you put little effort into. A homemade herbed butter on thin toasts would be a lighter, but still tasty, option. Adler suggests customizing olives by draining them of brine, and heating them with citrus peel, a bit of spice and olive oil. Moskin and Severson elevate crudite by making radish cups topped with butter, anchovies and herbs or serving Mexican snacks like chili-spiced peanuts or jicama with chili powder, lime juice and zest.

So how did it all work out, using tips from the most gracious hosts around? My own advice is that prepping really works. If you are driven to host, you may have (like me) an invincibility complex and find yourself swapping recipes and creating bigger and better visions of dishes even as you get closer to the event. Actually writing out your prep work and taping it up for you to see is a huge reality check. And it is immensely satisfying to cross off the items with a bold black Sharpie. People differ on how well they can stick to these sheets (really, check out Ronna Welsh’s blog post on prep for an in-depth primer), but regardless of your style, do prep.

I would definitely add more about drinks on my prep lists–in particular, making sure there was plenty of water and a nice drink for non-alcohol drinkers. My party was during the work week, so it just makes good sense.

Also, dessert is definitely the course I run out of time on and if I have it at all, is usually store bought. For this dinner party, I used a molasses gingerbread cake from Cook Fight. It was so easy and guests raved about it. Also, Severson has a bit in there about simmering a can of sweetened condensed milk to make your own cheap dulce de leche. I thought it was so Mr. Wizard to be simmering a can during dinner. When I did it and drizzled it over my friends’ cake, I was thrilled. Every dinner party benefits from that kind of play or wonder.

I also realized this time around how much the host’s attitude has an impact on the guests; what’s most important is the shared experience of the gathering. So while cooking, when I found myself at a crossroads (those moments where you could go one way and spend extra time in a pursuit of perfectionism or the other and chat with a guest), I actively decided to not stress out and instead trust that people are mostly happy being fed. In other words, I erred on the side of good fun.

And finally, one last piece of level-headed advice from Severson.

Love Means Never Having to Say Your Sorry
The ultimate tip is to remember that people are just happy to be invited. “Never apologize, “ says Severson. “If your mousse doesn’t set, say it’s a chocolate sauce.”

Now that you’ve got dinner covered, here are some low-stress ways to dress up your table»