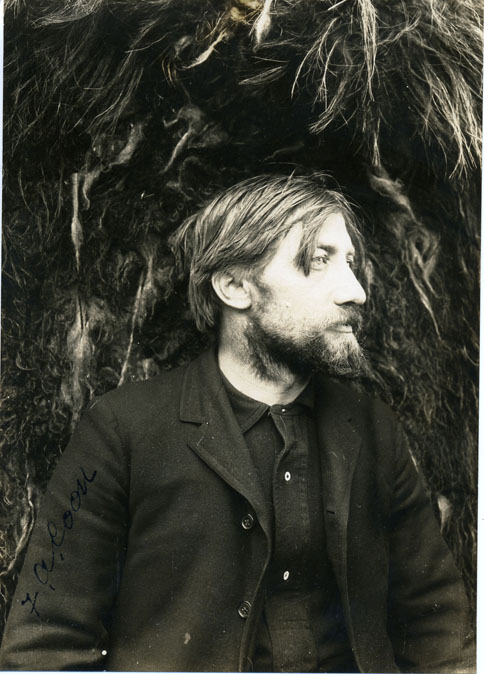 A stately red brick mansion sits at the corner of Willoughby and Bushwick Avenues. Behind a chain link fence, the elegant structure’s turret and wide windows look out on the elevated M train tracks, a bustling KFC, and an empty lot. The 19th century structure is not the only fragment of a more prosperous time on this Bushwick corner—across the street a tiny park holds a World War I memorial with a striking bronze angel who raises her arms to the busy streets.

This building was once the home of one of America’s great explorers, a man who claimed to be the first to stand on the North Pole. And his name was not Robert Peary.

Frederick A. Cook grew up in Brooklyn and later practiced as a physician in the borough after studying at New York University, but it was in the arctic where the doctor gained his fame. Yet what would have been his crowning achievement has long been cast in doubt. His supporters believe that Cook was the first to reach the North Pole and was cheated out of his success, while others claim he was a charlatan. The worn brick manor, whose old world grace is a relic in contemporary Bushwick, offers a a ready analogy to Cook’s legacy—while Peary’s reputation is gloriously cemented in history, Cook’s is battered and largely forgotten. 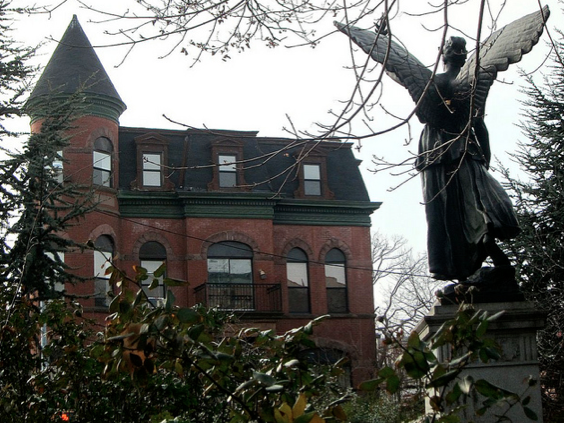 This angel is part of a WWII memorial across the street from Cook’s Bushwick mansion. Photo: Allison C. Meier

In 1891 Cook got his start exploring, setting out with the man who would later become his rival. He joined Peary on an expedition to Greenland, serving as surgeon, ethnologist, and often as Peary’s second in command. A softly spoken man with strong shoulders, wispy hair, and broad, gentle eyes, Cook’s sensitivity to the Inuit tribes they encountered proved invaluable as he learned their language and fostered relationships while documenting their customs. His compassionate interest was just one of the many differences between him and Peary, who notoriously dropped Inuits off at the American Museum of Natural History as a sort of human exhibition, most of whom subsequently perished.

Peary’s quest for personal fame would ultimately clash with Cook’s scientific publication interests. The two men would later go their separate ways, although both often found themselves in Brooklyn in between expeditions, with Cook continuing his medical practice and living in his Bushwick manor, and Peary, a naval officer, working in the Brooklyn Navy Yard. P.S. 75, The Robert E. Peary School still welcomes elementary school students in Ridgewood, a short distance from Cook’s former home in Bushwick.

Cook would prove to be a calm and reliable expedition member in the polar regions, particularly in the ill-fated 1897-99 Belgian Antarctic Expedition, which included another iconic explorer, Roald Amundsen. Their boat became lodged in the ice and they spent several months in total darkness. Cook used fires within the boat to expose sick crew members to light to regain mental health, led them to eat raw meat to stave off scurvy, and guided the crew to blasting and digging a trench through the ice to salvation.

The first of Cook’s disputed successes came in 1906, when he stated he was the first to reach the top of the then unscaled Mount McKinley in Alaska, the highest mountain in North America. His record would later be discredited when a fellow climber, Ed Barrill, said that Cook’s journal and photograph of the peak were fake, although it’s known that Barrill received some form of payment for this statement.

Then there was the North Pole, an arduous journey that Cook started in 1907, heading out with two Inuits, a small party as far as early polar expeditions went (Peary took 23 men with him on his expedition). Cook barely made it back alive, appearing to be more ghost than man when he and his companions finally returned, having struggled through frigid storms and starving conditions, even slaying a polar bear and eating it raw out of desperation. On September 1, 1909 he announced to the world that he had reached the North Pole on April 21, 1908. Soon after, Peary also claimed to have reached the pole: on April 6, 1909—nearly a year after Cook.

Both claims were published as blaring headlines in New York newspapers, with the New York Times awarding Peary the prize and the New York Herald publishing in Cook’s favor. When Cook arrived in Brooklyn, he was greeted with enthusiastic support and a celebration that processed from Williamsburg to Bushwick, and an arch with his image on it and the words “we believe in you” was erected outside his Bushwick home.

Yet it would be Peary who would become known for the accomplishment in the end, with the less-funded Cook unable to adequately back up his claims. It hardly helped that Cook didn’t have his scientific instruments, as the man who was supposed to bring them back traveled aboard Peary’s ship, who wouldn’t let them aboard. Worse than just losing out on the achievement, he was disgraced, both in the news and at home in New York, including at the Explorers Club where he had once been president.

Cook was no stranger to misfortune. His first wife died during childbirth while he was still in his 20s, but losing his status as an explorer proved to be an even more staggering blow. After failing to regain support, particularly with his book My Attainment of the Pole, he eventually went to Texas to work with oil stocks, but the move in no way helped his tarnished image when he was taken to court for mail fraud and given a 14 year sentence, serving a third of it in prison before being paroled in 1930. He got some vindication at the very end of his life, when President Franklin D. Roosevelt pardoned him in 1940 of his Texas stock conviction, but at that point he was 75 years old and dying. Broken in spirit and impoverished, he left behind an unpublished memoir bitterly titled Hell is a Cold Place.

His final resting place is in Buffalo’s Forest Lawn Cemetery, where half a metal globe is embedded in the ground marking his North Pole achievement, in this one place, for eternity, while his urn rests in an alcove not far away.

The 1885 house where Cook once lived at 670 Bushwick Avenue experienced the same decline as the surrounding neighborhood during the 20th century, especially after the devastating 1977 blackout during which much of the area went up in flames. Recently, the boards that once covered the windows were taken down and the formerly abandoned building has been divided into renovated apartments, a three-bedroom unit goes for $2,750 a month. Likewise, the legacy of Frederick Cook has been preserved by a handful of dedicated souls, most significantly in the form of the Frederick A. Cook Society, originally founded by his daughter. The Society still exists today and held a gathering at New York’s Yale Club on the 100th anniversary of the day he claimed to reach the Pole.

Cook’s descriptions of what he saw at the North Pole have also proved remarkably close to what other explorers would later witness. Furthermore, a 1988 National Geographic Society re-examination of Peary’s claim questioned whether he had adequate evidence for his achievement, and many believe that even if Peary’s expedition did reach the pole, it was Matthew Henson, an African-American explorer who lived in Harlem, who was the first person there. It will likely never be possible to say with confidence whether Cook reached the North Pole, and both sides continue to passionately battle it out in books and on the internet, but at the least Cook deserves some recognition for his intrepid work and dedication to bravely researching the arctic and being conscientious about Inuit culture at a time when so many explorers were not. Perhaps someday a plaque may be placed outside his overlooked Bushwick home so that in some way the Brooklynite’s intrepid legacy may be officially remembered, but until then the red brick house itself will have to serve as a local reminder of a man who was drawn to the promise of adventure on the unexplored tips of the world.

Leave a Reply to Alex Whitaker