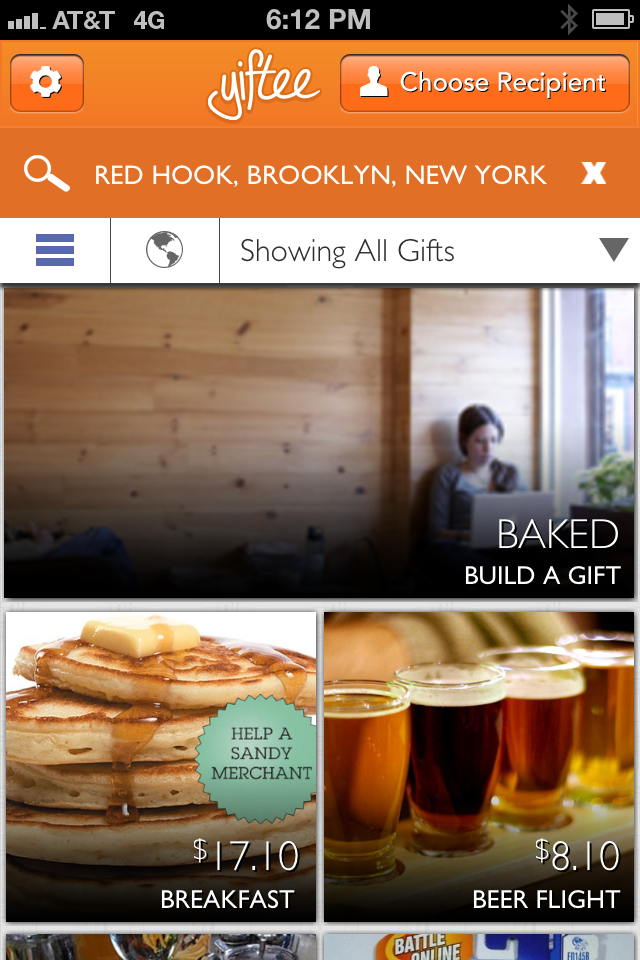 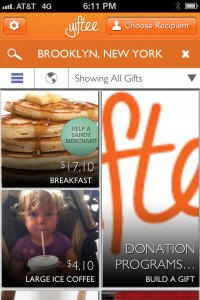 “We thought this was a great technology to use following Hurricane Sandy,” says Risley.

Yiftee is a way to buy locally, even when you don’t know the locale. Say you want to send a friend in San Francisco a sweet treat to celebrate a promotion at work. You just log in, search by area (you can even specify neighborhoods) then send your pal a Yiftee credit in any amount for, say, a scoop of salt-and-pepper ice cream at Humphrey Slocombe. Once you’ve specified the gift you can write a message and send your greeting and the gift via email, Facebook or text message. It appears along with a prepaid, virtual Mastercard on their end, redeemable at the spot you picked. And no, they’re not locked in to your selection–your friend is free to choose a scoop of butter beer ice cream instead.

There is also a charity element to the site and iPhone app. Risley arrived in New York on Dec. 2 to be the face of Yiftee in the areas of the city most affected by the storm, including Red Hook, the Rockaways, Coney Island, Brighton Beach and Sheepshead Bay. She worked directly with volunteers and businesses like Hope and Anchor in Red Hook to determine the best ways to contribute to their recovery and relief efforts.

Back in Silicon Valley, Laub and Novitsky went to work creating a dedicated Sandy Relief donation section on Yiftee, which is co-sponsored by Red Hook Volunteers and Smallwater. “Whenever donations come in, we figure out locally where they will go,” Risley says. “I can ask them [Sandy volunteers] ‘Okay, what do you guys need now?’ and they can say ‘I need insulation. I need putty. I need gloves.'”

All the Yiftee donations are spent at local stores. “We’re not going to Home Depot or Walmart,” Risley says. “That is the deal we made with every organization we’re working with.” Donors receive confirmation once their donation is used and can send a message to the volunteers distributing their gift.

Another way to give a gift and give back to Sandy-struck businesses is to send a friend a Yiftee for brunch at Hope & Anchor or a coffee and a treat at Baked, both of which are back open after sustaining considerable damage.

Unlike discount sites like Groupon, there is no discounting required of merchants on Yiftee. “I personally couldn’t figure out how the Groupon phenomena was helpful given the discounts that were required and how the whole thing worked,” Laub says.

She and her partners spent almost a year interviewing merchants to figure out the best platform for businesses, and have made it free and simple for them to sign up. Already there are participating spots nationwide, and plenty of Brooklyn favorites like Roberta’s and the Brooklyn Flea for your West Coast friends to treat you to.