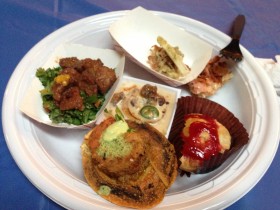 Last Sunday, Brooklyn Brewery played host to The Food Experiments Championship Showdown with 14 amateur chefs from 13 different cities squaring off to see who could formulate The Best Bite. This was the culmination of the Food Experiments’ 2012 Tour, which started last March, with a series of cook-offs throughout the U.S. (and in Sweden) to find the most creative and skillful amateur chefs nationwide. The main room of the brewery was stuffed full of tables, each representing a different team, a different city and a different bite.  Ever-present in the contestants’ offerings and attitudes was the competition’s modus operandi–to experiment whenever possible and concoct dishes that tasters would be unlikely to find anywhere else.

The event was born out of a rivalry-turned-friendship and eventually partnership forged between Nick Suarez and Theo Peck, two competitive amateur cooks who, after competing for years in amateur cooking competitions throughout Brooklyn, found themselves constantly battling each other for the top spot.  The Food Experiments began in on June 7, 2009 with The Brooklyn Beer Experiment.  Peck and Suarez have something of a hipster odd couple thing going, though their affection for one another was clear when they stood on stage announcing the winners Sunday night.

However, there was a bitter sweetness in the air as it was announced that Peck and Suarez would be moving on from the Food Experiments in order to open a prepared food shop and a catering company, respectively. When asked about his forthcoming shop, Peck commented that his Jewish upbringing will be heavily reflected in the food he prepares.

The amateur aspect of the food experiments tends to account for some its charm.  The event isn’t especially organized: tables are set up, folks grab plates, pile them high with as much food as they can, eat, and then get another round.  None of the competitors cook for a living and perhaps inherent in that is a freedom to experiment.

Joey Funtjar and Jenny Jarvis, Team FuntJarvis, came from Columbus, OH with a squash buttermilk biscuit and a winter ale-braised pork bun topped with granny smith apples and tomatillos.  Funtjar is a realtor.

Team You’re Bacon Me Crazy made bacon and jalapeno hushpuppy ice cream. The team was made up of a software engineer and a pharmacist.

The audience vacillated between the serving room and the eating room where they ate and discussed around big circular tables in the brewery before voting for their favorite dishes.

“The fried date is my favorite. Even though there’s minimal meat it’s awesome, and usually minimal meat and awesome don’t’ go together,” said Jana Yabblonski who came from Philadelphia to support a friend in the competition.

“I like the oxtail dumpling,” said attendee Walter Hunt. When I admitted to not having tried it, he insisted that I take his. “I’ve already had three!” 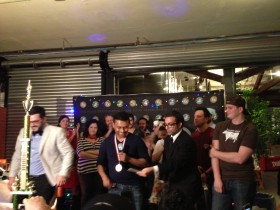 Team One World Kitchen took home the prize (for Brooklyn).

Jonathan Schnapp, who won last year’s championship with his Serious Business Taco was one of this year’s judges. Schnapp who is about to open the Royal Palm Shuffleboard Parlor in Gowanus, took to the stage and gave the trophy one last hug before relinquishing it to another Brooklynite. Team One World Kitchen headed up by Chef Charles won the judges award with his Jewel Encrusted Shrimp. The audience award, as voted on by the attendee’s was taken home by Philadelphia’s Team Jaws 3D for their Return of Jawndi Pork Dumpling.  The winners also took home Jet Blue Tickets, cash and kitchenware from Le Creuset.

“This is the biggest, best, grandest event we’ve held,” said Nick Suarez, Food Experiments co-founder, who assured me that though future Food Experiments events may be more sporadic than they’ve been for the past few years, the competitions will live on.