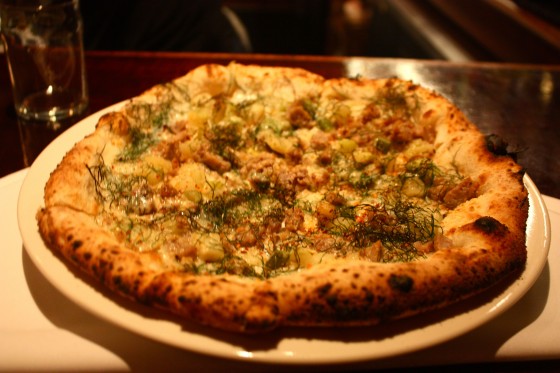 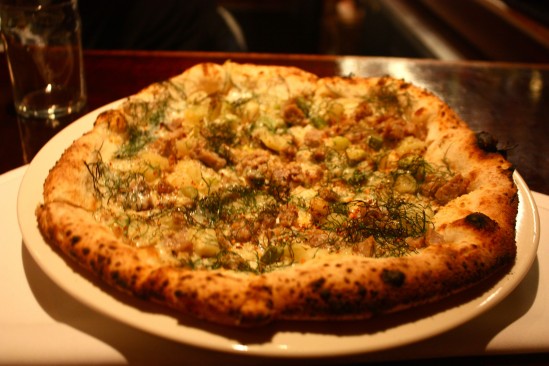 Just when it seemed like Brooklyn couldn’t handle any more new pizza joints… Just kidding! There is no such thing as too much pizza here. Both the classic New York and fancy Neapolitan pizzerias keep on coming, from Williamsburg Pizza (loved it) to Stottocasa (disappointed) and Brooklyn Central (looks promising). And now, the year’s two most anticipated pizza places have both opened their doors in recent weeks.

The most closely watched of the two, Patsy Grimaldi’s new DUMBO spot Juliana’s, finally debuted last week. Grimaldi, of course, is pretty much the biggest name in the world of New York pizza. He grew up in the original Patsy’s family and founded the legendary Grimaldi’s, which he sold in 1998 before it became the overhyped tourist trap that it is today. When the existing Grimaldi’s Pizzeria moved two door down earlier this year, Patsy, now 81, decided to return to the game, opening Juliana’s in the old Grimaldi’s space (and making good use of its still-operational coal-fired oven, which are very difficult to come by). Still with me? Okay, so Grimaldi’s Pizzeria (not owned by Grimaldi) is now in its new space, and Juliana’s (owned by Grimaldi, and named after his late mother) has opened down the block. 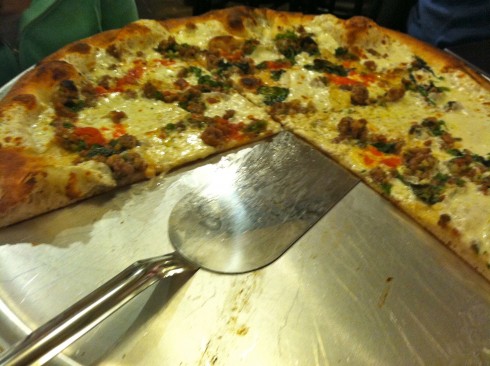 Juliana’s was already packed when I stopped in this weekend, with both dine-ins and pick-up orders. Not surprisingly, this is an old-Brooklyn kind of pizza place: not much invested in decor (although the counter fronting the open-kitchen pizza oven is cool) or service (to be fair, it was a packed opening weekend). No, the focus here is on the pizza, from simple margharita pies to specials like mozzarella-sausage-garlic-broccoli rabe (above). And, getting right to the point: the pizza is fantastic. The very tasty, slightly-sweet crust is just a little bit charred, but with lots of smoky flavor from the oven, and as thin as you can get while still holding up strong (no utensils needed here!). The cheese is fresh and rich; and the juicy, fennel-spiked sausage as good as meat-y pizza toppings get. In short, this is pizza worth traveling for. It’s hard to imagine how Grimaldi’s–which, by the way, was empty this weekend–will be able to retain its out-of-towner crowds now that Juliana’s is serving a far superior product just down the block.

Just over a mile away, Brooklyn’s other hot new pizzeria, Krescendo, comes with a very different pizza pedigree. San Francisco chef Elizabeth Falkner, best known for her TV appearances on Top Chef and The Next Iron Chef, recently won the Caputo Cup in Naples, Italy, aka the World Pizza Championships (yes, that’s a thing). Her prize, a giant, double-handled, Wimbledon trophy-type behemoth, now sits on the counter fronting the wood-burning oven at Krescendo, which opened last month on Atlantic Avenue in Boerum Hill.

Falkner’s pizza menu brings plenty of West Coast influences (the Hippie Chick pie has hummus, yogurt, sunflower seeds and sprouts), but I figured it made most sense to start with the pizza that, as the menu boasts, won her the trophy. The Finnocchio Flower Power employs rich, mozzarella-esque panna cheese, shaved provolone, Calabrese chili powder, fennel sausage, slices of braised fennel, a good few fistfuls of fennel fronds and fiori di finocchio (fennel pollen). Clearly, the focus here is on the fragrant greens; the cheese is almost an after-thought, lending some tang but hardly any body. That leaves plenty of room for the charred, sourdough crust to come through alongside all that fennel. While Patsy Grimaldi and any other octogenarian Brooklynites might cringe at the sight of this garden-fresh, almost cheese-less pizza, I have to say I personally can’t stop thinking about this pie.

The verdict: Both new options are must-tries for any dedicated Brooklyn pizza aficionado. Krescendo, with a warm, homey atmosphere and sophisticated cocktail list, is the more complete restaurant, but Juliana’s ever-so-slightly takes the title of spot I’m most excited to return to. (Gotta be that coal-fired crust!)