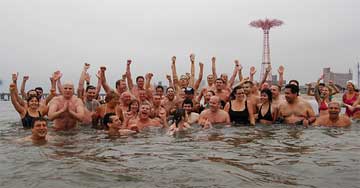 If you’re looking for fire dancers, masquerade balls, secret warehouse parties and DJs, we’ve listed a bunch of spectacular New Year’s Eve experiences on the BB blog in parts one, two and three. If you’re a little worn out from the holiday season, or just want to have a mellower evening, here are a few special menus, grown-up parties and other low-key, but social ways to spend the last night of 2012.

This is what flasks are made for. The Brooklyn Borough President and the Prospect Park Alliance are hosting fireworks, plus music and free hot chocolate in Grand Army Plaza. Mud Truck, Wafels and Dinges and Rickshaw Dumpling will also be parked along the plaza for sips and snacks. Festivities get started at 11pm, and what could be more romantic than watching the fireworks light up the sky from a dusky park with a hot toddy in hand?

Tuffet is one of those rare bars where your mixology-obsessed friend can drink a Manhattan without sighing dramatically and explaining to the table just how one goes about making a proper cocktail, you can order a civilized glass of wine and your dive loving pals can enjoy a Bud and a shot of Old Overholt. It’s not too fancy, not too grungy and there’s a backyard with a fireplace. They’re throwing a New Year’s Eve fete with old school beats, no cover, no drama and a champagne toast at midnight.

Diner opened its doors on New Year’s Eve 1999, and the Williamsburg restaurant has a long history of throwing great year-end parties. This year, Diner and sister restaurant Marlow and Sons are both planning special menus for the evening. While sea scallops, coq au vin pheasant and grass-fed steaks sound amazing, we’re super stoked on the fact that you can order oysters at Marlow and Daughters to shuck and serve at home, or bring to the party you’re attending. There really is no better companion for champagne. Call (718) 388-5700 to order for Sunday or Monday pick up.

For active types, the Brooklyn Road Runners are sponsoring a 5k run in Prospect Park that starts at 11:15pm so you can breeze through the finish line and grab a cup of hot chocolate at Grand Army Plaza. Or, go on a crazy festive bike ride with Time’s Up! The environmental advocacy group hosts an annual New Year’s ride through Manhattan to Belvedere Castle in Central Park, with a free dance party at the end. Costumes and noisemakers strongly encouraged. Brooklyn riders can meet at the entrance to the Williamsburg Bridge. And, like Prince purifying himself in the waters of Lake Minnetonka, perhaps you want to start 2013 with a freezing plunge into the Atlantic. The Coney Island Polar Bear Club will head bravely into the surf for the 110th year at 1pm on Jan. 1.

Since it opened earlier this fall, diners and critics alike, including our own Brendan Spiegel, have been falling in love with Prospect in Fort Greene. There are still reservations for the 6pm, 8:15pm and 10:30pm seatings of their special New Year’s Eve menu ($110 per person, $65 per person wine pairings). You’ll be feasting on butter-poached lobster, steak and truffles, “nitro foie balls” and a dessert tasting course–sounds like fireworks for the tastebuds.

If you like a more free-flowing New Year’s, where you can eat a nice meal (or not) before some casual bar hopping, these three neighborhoods are built for a memorable night out.

Red Hook: Putting your New Year’s Eve Dollars to Work
At Fort Defiance, there are still early seatings left at their dinner honoring the food and drink writer Charles H. Baker Jr., for $95 a head including wine and cocktails. Head to Brooklyn Icehouse to keep the buzz going and then end the night at Hope & Anchor  for karaoke (starting at 9pm) with local crooners or Bait & Tackle with seven live bands. If you find a way to stay awake until 10am, or want to celebrate the first day of 2013, Home/Made will be re-opening for New Year’s Day brunch featuring specials like Southern ham biscuits. (The Good Fork–whose New Year’s Eve dinner is pretty much sold out–will be open for dinner Jan. 2!) Whatever you choose, this is a great neighborhood to ring in the New Year, and all the businesses certainly can use the support. (Fallback options: Rocky Sullivan’s–which is serving a surf and turf dinner with Red Hook Lobster Pound–or Jalopy Tavern on Columbia Street).

Greenpoint: As Mellow as You Want it to Be
Calyer, the perfect place to make out in a corner booth between courses, is serving a four-course $75 pre-fixe meal with the option of unlimited prosecco, beer, wine and whiskeys for $45–there are limited seatings left so reserve now if you’re feeling it. Get a craft beer next door at The Diamond, then venture up to Irene’s Capri Lounge for a $1 jello shot and other dive bar delights. Head down Franklin Street and peek your head into either the Pencil Factory bar or Black Rabbit, both low-key bets. For some wild card action, t.b.d. has an open bar from 10pm-2am for the low price of $30 and at metal bar St. Vitus, psych-rock band Psychic Ills is headlining a $10, 10pm show. (Fallback options: Troost, Oak and Iron, Manhattan Inn–serving a $50 prix-fixe, and dance party after midnight–and Beloved.)

South Slope: Fun, Not Fancy
There are a small number of seats left at the delectable, intimate Lot2 for their $75 New Year’s Eve dinner, but if that’s not in the cards, then grab some brick oven pizza at Tobey’s Public House or go to Korzo for Eastern Euro classics like schnitzel and goulash or a burger that’s wrapped in dough and then fried–which is awesome and will prepare you for the night ahead at three sweet neighborhood bars: Freddy’s–pouring a free glass of bubbly at midnight–Sea Witch, and the cocktail haven Quarter Bar .