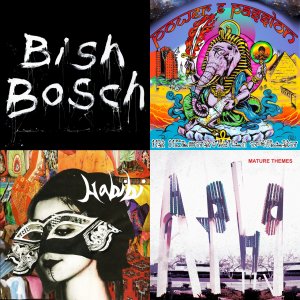 We asked our Tip Sheet contributor Jay Honstetter, who doubles as a guitarist in the band Freshkills, to name his favorite songs of 2012. The requirements were loose–it didn’t have to be a Brooklyn band, just any song he’d heard in Brooklyn in the past year. His picks are a little more punk rock and hip hop than our other excellent end-of-year recap, Listening Back on 2012–which makes it good for pre-gaming on New Year’s Eve–and most were culled from the live shows he recommends each week in the Tip Sheet. You can listen on Spotify or here.

Scott Walker, “Epizootics!”
Scott Walker may be 70 years old but he’s still got it. Released as a teaser for his latest record Bish Bosch, this 10 minute track is probably the first track since 1979’s Nite Flights, that you can actually dance to. Encompassing everything we’ve come to love about Scott Walker, the track includes a pulsing beat with a cool bass line, some off the cuff lyrics, hand claps, horns, slide guitar, Walker’s signature/untouchable baritone voice (which age hasn’t tarnished a bit) and a little ukelele to top it off.

Habibi, “Sweetest Talk”
Habibi strips rock music down to its absolute essentials and makes strong use of catchy hooks and ’60s girl-group sounds to keep this song in your head for weeks on end.

PiL, “One Drop”
Public Image Ltd’s first single, from their first record since 1992, proves to be their best release since 1979’s Metal Box. While I wish they would’ve returned to the 1979 lineup, this was a really nice surprise.

Danny Brown, “Grown Up”
Danny Brown is the best at being grown-up! Taking a page out of A Tribe Called Quest’s book (for “Can I Kick It”), this track uses a version of Lou Reed’s “Walk On The Wild Side” as the backing track with a cool beat and a melody that reminds me a bit of Skee-Lo’s “I Wish I Was A Little Bit Taller” (remember that?)

ZZZ’s, “Suicide” (The one song we couldn’t find on Spotify)
No-wave, post-punk, noise, call it what you want, this all-girl Japanese trio is loud. Disco beats, noise guitar, screams, whispers and madness.

Casey Veggies, “Sauna”
To be featured on the Fools Gold compilation Loosies, out on Dec. 18th as a limited edition cigarette shaped USB drive, the song from the California rapper has been released with a video as a teaser. Produced by Chuck Inglish, sounds very west-coast ’90’s. Jazzy, laid back and all about swag.

Azealia Banks, “212”
Harlem native Azealia Banks proves she’s hilarious and can take NY hip-hop to a whole new level. The production on this is weird in the best possible way and the hooks are fun. Also, the video is super simple and funny, gotta love that Mickey Mouse sweater, and those dance moves.

Method Man, “Built For This”
Off RZA’s soundtrack for his directorial debut, The Man With The Iron Fists, this track has Method Man rapping over some serious RZA production. Catchy and fun as hell.