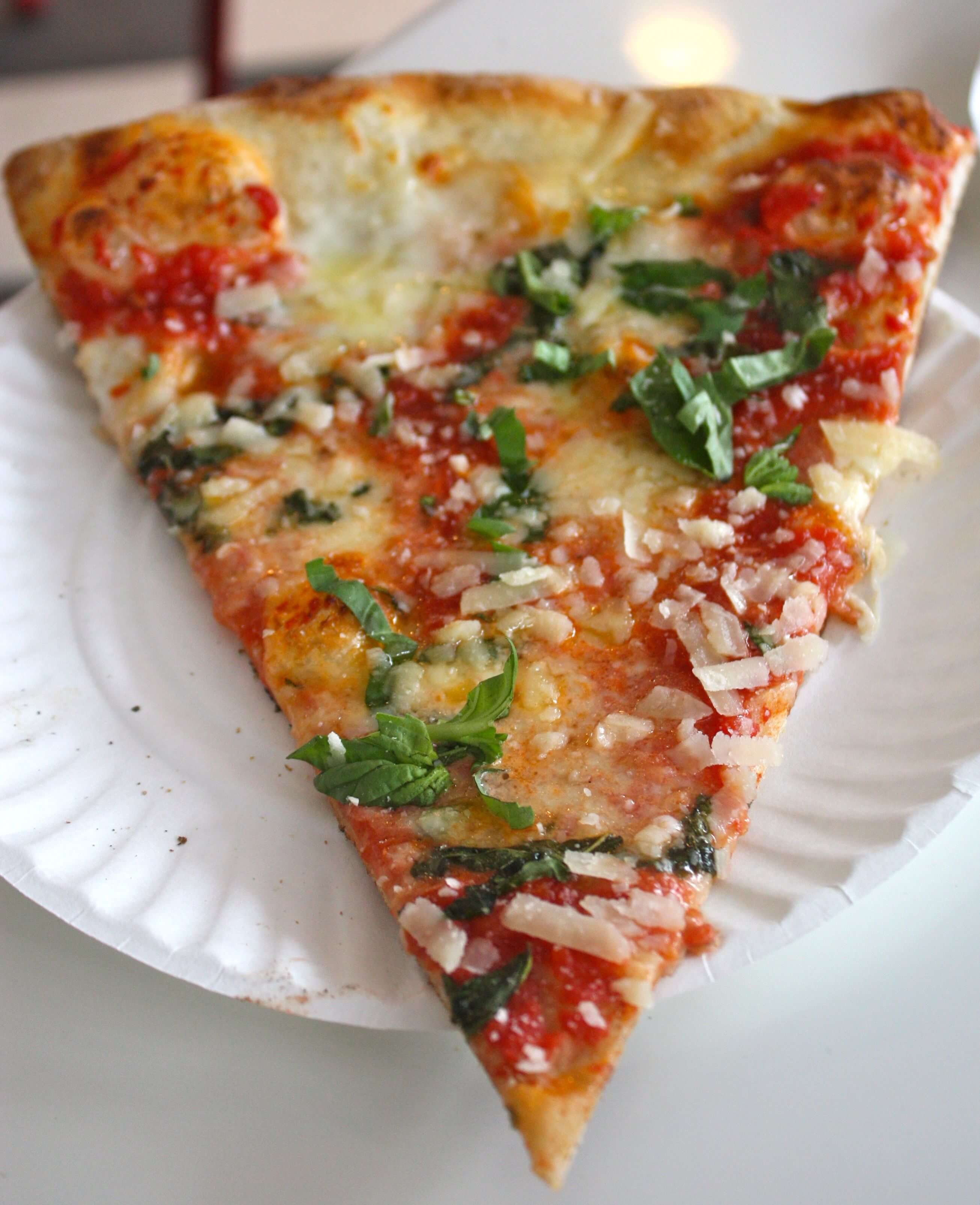 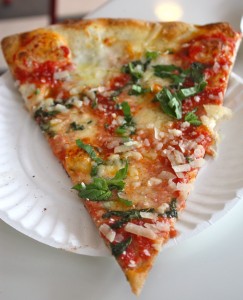 The margarita slice at Williamsburg Pizza, one of our favorite new spots this year. Photo: Brenden Spiegel

It’s no secret that Brooklyn is now one of the best places in America to dine, and in 2012 the borough’s food scene grew increasingly diverse–and increasingly high-end. For locals, that’s made it more and more difficult to sort out the unique from the overhyped (hello, Brooklyn Crab), the great from the gimmicky (sorry, Talde), and the substance from the style (we’ll leave Wythe Hotel to vacationing Manhattanites). Here’s a look at the new Brooklyn dining spots that truly pleased our bellies this year, and a few trends we’d like to send back to the kitchen.

Most Improved Eating Neighborhood: Gowanus
For several years, this one-time industrial wasteland has gradually been adding drinking-and-dining gems like Four and Twenty Blackbirds pie shop and The Bell House music hall. But 2012 was the year Gowanus blossomed into the full package. The Littleneck team expanded with the ambitious Pines, Fletcher’s brought high-quality BBQ to the neighborhood, and Lavender Lake added top-notch cocktails. The just-opened Runner & Stone brings breakfast (and lunch/dinner) from a Per Se-pedigreed baker, and Gowanus is primed to continue bringing the good in 2013, with the highly-anticipated Royal Palms Shuffleboard Club, plus new branches of Gorilla Coffee and Dinosaur Bar-B-Que. Pretty sweet for a Superfund site.

Most Ridiculous Controversy: Greenwood Park Stroller Wars
This massive beer garden’s back-and-forth decisions about whether to cater to hipsters or babies was front-page news in more than one paper this summer, with the Times, News and Post all reporting on the “turf war” between stroller-pushers and shot-takers. The mega-bar ultimately split the difference, banning babies after 4pm–ensuring even more outrage, and even more coverage. We’re not sure we even understand the basis of the hipster-vs-babies conflict. Park Slope children are the biggest hipsters we’ve ever met. Can’t we all just get along?

Best New Seats: Chef’s Table at Prospect
Seven stools line the marble counter top facing the Coney Island wood-fronted, recessed open kitchen at this excellent new Fort Greene restaurant–the most attractive new place we’ve found to enjoy a meal in Brooklyn. Not only does Prospect get points for avoiding our “worst trend” list by pricing their tasting menu at a not-ridiculous $80, the eatery also allows diners to sit here while choosing either the high-end tasting fare, or just ordering a la carte items like a perfect Wagyu beef burger and truffle fries, alongside a Smokey and the Bandit–one of the best cocktail we’ve had all year.

Best Import: Pok Pok NY
We’re not sure why acclaimed Portland, Oregon chef Andy Ricker decided to make his Brooklyn debut tiny, oddly-arranged and inconveniently located for about 98 percent of New Yorkers. But we do know that he aces everything from chicken wings to papaya salad to pork, and that his innovative Thai food is worth the (often ridiculous long) wait. And, for those who balk at the two-hour-line, come next spring you’ll have a new place to sit it out, as Ricker plans to debut an adjacent branch of his excellent Portland cocktail bar, Whiskey Soda Lounge.

Best New Pizza: Williamsburg Pizza
While Juliana’s and Krescendo made late plays to grab the best-in-show title during a particularly strong year for Brooklyn pizza, this no-frills South Williamsburg newcomer is still our favorite. Nino Coniglio’s pies are the first we’ve seen that effortlessly bridge the pizza gap between cheesy, doughy New York slices and more delicate Neapolitan fare. Coniglio’s perfectly crisp Brooklyn crust is topped with rich, freshly-made mozzarella, plus original topping combinations like goat cheese-sopressata and bacon-and-pear. Starting at $2.50 a slice, this is as close to pizza perfection as it gets. 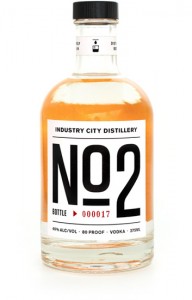 Best New Brooklyn-Made Booze: Industry City Vodka
We tasted all of the upstart Brooklyn distillery fare this year (you’re welcome), but far and away the most unique and impressive is the super-smooth vodka coming out of Sunset Park’s Industry City Distillery. These crazy geniuses utilize the “fractional distilling” method to chemically separate each element of their vodka, giving them maximum control over the final product. ICD’s #2 vodka was the most drinkable variety we’d ever tasted…until their just-released #3 one-upped it with an even smoother, silkier, 80-proof booze. No mixers needed.

Best Return to Brooklyn: Liza Queen
After the doors of the Queens Hideaway, the cult-y, Southern-inspired Greenpoint eatery, closed in 2008, chef Liza Queen lit out for Vietnam to find new flavors and inspiration. While Potlikker, the new place she opened this summer on Bedford Avenue, is by no means an Asian restaurant or a fusion confusion, you can taste the influence of her time in Southeast Asia in many of the sublimely spiced dishes on the menu. It’s some of the most delicious, interesting and personal food we’ve eaten in a restaurant in recent memory. Queen’s cuisine tells the story of all the places she’s cooked–Portland, Brooklyn, Vietnam–and the cuisines she’s obsessed over–Southern, Southeast Asian, working class New England. We’re lucky to have her back and excited to see how a few more years in Brooklyn will add to her flavor profile.

Worst Trend: Triple-Digit Tasting Menus
We’ll admit we were as proud as any righteous Brooklyn foodie when Brooklyn Fare nabbed the borough’s first two-Michelin star rating (and later, three). But not only has the Schermerhorn Street chef’s table gradually climbed from already-expensive $125/person to an eye-popping $225, it’s also paved the way for triple-digit tasting menus throughout the borough. You can now spend $100-plus-per-person (before drinks, tax and tip, of course) at Battersby (a hole-in-the-wall on Smith Street), Blanca (the back room of a pizzeria in Bushwick) and several other spots, making us worry that such setups are well on the way from once-in-lifetime to near-standard. Even Maison Premiere, which until recently was a cocktail-and-oysters bar, is now pushing perilously close to that line, offering a $95-a-head tasting menu. We’re all for world-class cuisine in Kings County, but can we leave the one-percenter meals to Manhattan?

Best New BBQ: Briskettown
After intensely studying Texas-style brisket for three years, Daniel Delaney is probably more obsessed with BBQ technique than any New Yorker, which these days says a lot. Yes, his pre-opening online ordering scheme was gimmicky. Yes, the rage about his $25/pound price tag is somewhat warranted. But it doesn’t matter, because Delaney walks the walk. His crispy, caramelized, super-tender brisket is not only the best new BBQ in Brooklyn, its among the best we’ve ever had.

Best Out-of-Borough Experience: Biang!
Our favorite food find of the year is well outside Brooklyn’s borders, near Main Street in Flushing, Queens. The atmosphere at Biang! is more Smith Street than Chinatown–a homey dining room lined in exposed brick and soft lighting, and not only is the food, from China’s central Xian region, exceptional, the prices stay locked solidly in the Queens range. Spicy, charcoal-grilled cumin lamb skewers are a whopping $3-4 apiece, while larger dishes like quail eggs and sausage on toasted mantou (steamed bun slices), and hand-pulled noodles with pulled pork belly, don’t top $10. Overall, Biang! is the best new reason we’ve found to leave Kings County.