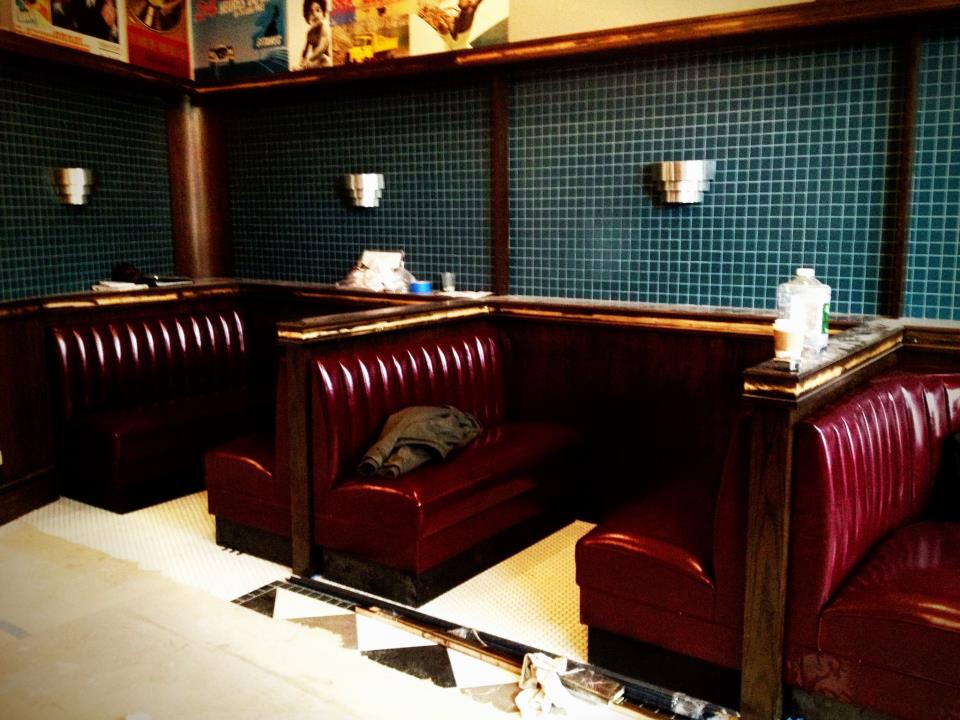 Another new year, another opportunity to take a look forward at where we’ll be downing craft cocktails, artisan grilled cheeses and elevated street food in 2013. As Brooklyn’s verging-on-ridiculous food scene shows no signs of slowing down, here are the top 10 places we’re most excited to sink our teeth into in the year to come. 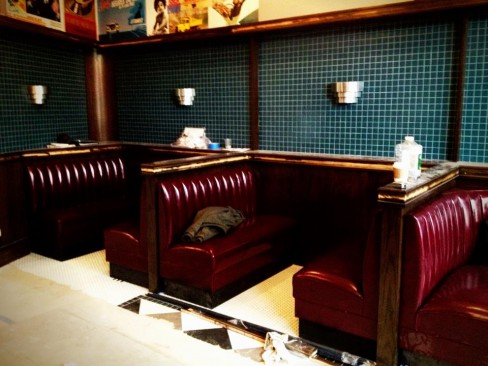 Chef Pip Freeman, formerly of The Grocery, has been documenting his process revamping the former Joloff spot in Clinton Hill on Tumblr, and the half-finished space, lined with checkerboard tile, red leather booths and a vintage poster mural, looks like it should be a beaut. Freeman promises wines on tap and “French-American country food” with dishes like pork bourguignon and moules poutine–mussels and white wine gravy over French fries. Three Letters is slated to debut within the next two weeks. 930 Fulton Street.

9. Glady’s
The latest food truck to put down its wheels and open a brick-and-mortar location is also one of our favorites: Morris Grilled Cheese. Their sit-down restaurant will feature a sandwich-heavy menu along the lines of the hearty options served from the truck (think lots of truffle butter and duck fat), as well as a wood-fired grill turning out small plates and snacks. The next spot in line for Crown Heights’ gentrification-happy Franklin Avenue, Glady’s plans a soft opening in February. 788 Franklin Avenue 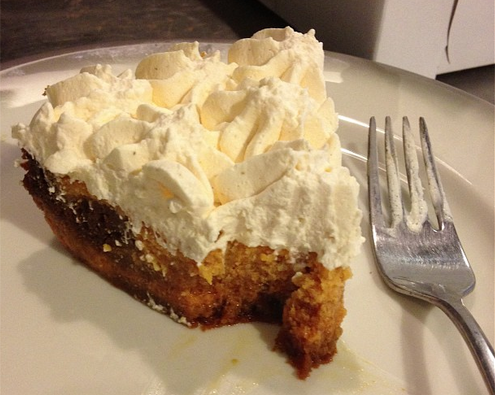 8. Butter and Scotch
Okay, brace yourselves folks–you’re about to dive into some of the most impossibly cute New Brooklyn sentences ever written. Brooklyn Flea vets Keavy Landreth of Kumquat Cupcakery and Allison Kave of First Place Pies are teaming up on this craft cocktail and dessert bar. Expect a “strong dialogue between the bar and pastry kitchen,” as in seasonal ingredients that are incorporated into both sundae syrups and cocktail bitters. Look for a mini-cupcake and liqueur flight with options like chocolate lavender cupcakes and chai amaro, plus savory lunch plates and bar snacks like dark and stormy caramel corn. Phew. The duo are still in search of a space, but are targeting Franklin Avenue in hopes of a May/June opening.

7. Splitty
Filling a much-remarked need for late-night grub in Clinton Hill, Andy McDowell of Pete’s Candy Store will turn the former Rope space on Myrtle Avenue into a bar-and-Chinese-steamed-buns concept. The kitchen will be open late, serving inventive creations like BBQ-and-biscuit buns, plus vegetarian versions. Later, McDowell plans to add a brunch menu themed around various steamed foods he encountered while living in Taiwan and other parts of Asia. “Splitty” is a slang term for an early-1960s VW bus, and the space will have a vintage camper theme, plus a backyard garden. April 1 is the target opening date. 415 Myrtle Avenue

6. Saint Gambrinus Beer Shoppe
Coming to the former Linger Cafe spot on the border of Boerum Hill and downtown Brooklyn, this serious beer-nerd emporium will encompass a bottle shop, draft beers, growlers, a tasting station and small plates of food. No word on an opening date, but the space looks pretty close to ready to go. 533 Atlantic Avenue

5. Doris
A collaboration between McDowell, Jason Andrews (a bartender/DJ/Manager at Union Pool in Williamsburg) and Jessica Warner (a buyer at Beacon’s Closet in Park Slope), Doris will push the lines of Bed-Stuy’s hipsterfication further east, opening in March on Fulton Street and Claver Place. The nightspot will include DJs and a “1970s earthship vibe.”

4. Falansai
Vietnamese chef Henry Trieu, formerly of the excellent Slanted Door in San Francisco, will bring his interpretation of Vietnamese street food to Bushwick in February. The name comes from the way his father mispronounced the word “Francais” and the food reflects that cultural mash-up, ranging from curry goat and coconut stew to Parisian-style escargot. 112 Harrison Place

3. Sweet Chick
The Southern-fried-everything craze expands to a prime Bedford Avenue spot in North Williamsburg this February. The signature dish will be chicken and waffles, featuring crispy bird brined in sweet tea and fried in duck fat. CORRECTION AND MENU UPDATE: We just heard from the Sweet Chick folks that the chef is Randy Reppel, not Farrow as we reported, and that the menu has changed a bit. Waffles are still on, both regular and updates like bacon and cheddar and rosemary and mushroom, as well as a kale BLT Salad and broiled oysters with bacon and house vinegar. They’re still slated to open mid-February. 164 Bedford Avenue

2. Dirk the Norseman
Brooklyn Brewery will have some competition come late spring, when the neighborhood’s second production brewery is scheduled to come online. Edward Raven, a former Brooklyn Brewery employee and owner of suds shop Brouwerj Lane, is collaborating with brewmaster Chris Prout on a line-up of hoppy, European-style beers, which will be served in the on-site beer hall and restaurant. The 6,000-square-foot space is named for the first settler of Greenpoint, whose farm once sat nearby. 7 N. 15th Street.

1. Royal Palms Shuffleboard Club
When co-owners Ashley Albert and Jonathan Schnapp visited a St. Petersburg, Florida shuffleboard club on a lark and found it filled with more ironic young hipsters than senior citizens, their response was obvious: this needs to come to Brooklyn. The result of that epiphany will be Royal Palms, a 17,000-square-foot mega-venue taking over a former dye-cutting facility in Gowanus. In addition to 10 shuffleboard courts–two tournament-style, for league play–Royal Palms will have cabanas, a bar serving coconut cocktails, a stage for live music, and a space for food trucks to drive in, so dinner options can change every night. Expect tiki nights, bloody Mary brunches and plenty of kitschy throwback Florida references. A soft opening for backers of their soon-to-be-launched Kickstarter campaign is targeted for early spring, with a full opening shortly thereafter. 514 Union Street

We also hear…Nightingale 9, the Seersucker Vietnamese spinoff featured in our fall preview, has been delayed until February….Andy Ricker will open a Columbia Street branch of Portland’s Whiskey Cocktail Lounge to relieve the hours-long wait at PokPok…Dennis Spina, chef at Roebling Tea Room, will be opening a place in Greenpoint near Transmitter Park in April…A new brewery called Other Half is setting up shop in Carroll Gardens…The Lockyard will push the beer garden movement south to Bay Ridge….Hometown will offer by-the-pound BBQ in Red Hook come spring…The upcoming Bar Chord will bring live music to Ditmas Park…The late, great Brooklyn branch of Motorino pizza will re-open soon in South Williamsburg…and Andrew Tarlow’s new Greenpoint bar at 62 Green Street may open the end of the month.