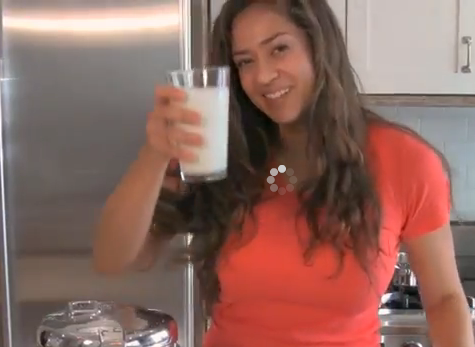 Anita Shepherd, the vegan chef at the helm of Electric Blue Baking, is making it easy for anyone with high aspirations for healthier eating habits to prepare better basic foods on a small budget through her new YouTube show, Beautiful Delicious.

We wrote about Anita last year in our Brooklyn doughnut round up. While she no longer makes baked goods, she has been busy working on the show and a few other projects. She is planning on launching a line of organic, coconut milk yogurt later this year.

Right now, Anita is focusing on producing kitchen staples, and  teaching other cooks how to do the same. The show is also targeted at the “vegan-curious” market–people who are just starting to dabble in veganhood. In addition to health and ethical reasons, Anita has found that new food allergies or intolerances can lead to a vegan lifestyle. “Sometimes people see veganism as a restriction,” she says. “In reality, I have never had more diversity and abundance in my diet. If anything, I am less restricted because I don’t have to worry about foods that are going to cause me discomfort. Part of the beauty of making vegan ingredients is that, if you run out of milk or butter, you don’t have to have a dairy farm to make it from scratch. You can find everything you need in your pantry. There are no processed, expensive or trendy ingredients, either. I prefer basic staples that are accessible and economical.”

Anita gave us an early look at her first video, How to Make Almond Milk. She bought the raw almonds at Patel Brothers Indian Supermarket in Jackson Heights, where you can score a sweet deal on bulk nuts–a 4-lb bag goes for just $15. You can get eight quarts of almond milk from that, following her recipe, and still have some nuts to snack on. “I calculated it, and by making it at home, I’m not just skipping on all the processed ingredients in the store bought brand, I’m also spending less,” Anita says. “One thing that frustrated me after going vegan is that you can go to the store and find good quality whole milk, yogurt or butter with one or two ingredients. But if you don’t eat dairy, the closest alternatives have, twelve, fifteen, and sometimes twenty ingredients. Many of them processed and artificial. For me, that seemed less, not more, healthy.”

Future videos will be on the Electric Blue Baking website and if you sign up for Shepherd’s mailing list, you’ll be first to know. They will include How To Make the Perfect Cup of Tea (Jan 25), How to Make Coconut Butter (Feb 3, and How to Make Cashew Cheese (Feb 20).

And, stay tuned for Anita’s coconut milk yogurt, coming this summer. “It was something I used regularly in my baking (it was in the strawberry glaze of the doughnuts at Smorgasburg), and once word got out about it, people started asking me if they could buy it,” she says. “So I’m going to start manufacturing it in Brooklyn this year.”