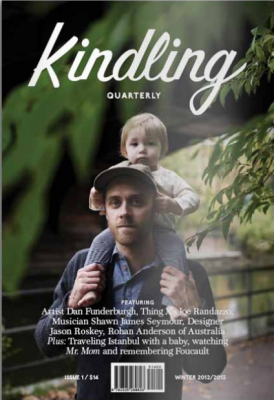 David Michael Perez can’t quite pinpoint how he came up with the idea of a literary journal for dads, but like a lot of his creative endeavors, Kindling Quarterly started off as a side joke. Like wouldn’t it be funny if there was a magazine about dads’ fashions? Which of course led to the realization that there was in fact, no magazine for dads, satirical or not.

Now, thanks to Williamsburg father Perez and his cohort, creative director P. August Heffner, there is, and the first thing that comes to mind as you leaf through Kindling is how brilliant it is. Because of course there should be a literary journal about fatherhood! We now dissect parenting regularly in The Atlantic, New York Magazine, the New York Times, on blogs, listervs, and Facebook–only it’s mothers who typically do the dissecting. The fact that two dads would jump right in and devote nearly 100 pages of interviews, photo spreads, and thoughtful discourse to fatherhood and the role of raising children feels like both a one-uppance and a relief.

We are at the point, after all, where co-parenting is a household word, and the sight of stroller-pushing dads–while not exactly the norm–doesn’t raise eyebrows.

Even cartoon movies like Finding Nemo or Transylvania Hotel–our modern-day Grimm’s fairy tales–now depict single fathers trying to raise their kids well (though often stumbling along the way). Loving dads have literally phased out the wicked stepmother–just as many men, in real life, have transitioned out of the all-work-and-no-caregiving roles they inherited.

Kindling, as the journal’s mission statement explains, is an attempt to replace the media’s caricature of the modern-day dad with images that are closer to reality.

“There is no shortage of familiar portrayals of dads in media yet we aim to present a thoughtful dialogue about fatherhood that is missing from our cultural landscape. Men who are active caregivers are not a novelty and we do not depict them as such,” the editors note.

So, goodbye Cliff Huxtable and Mr. Mom. Hello Shawn James Seymour of the band Lullatone and the iPhone app of the same name, who reflects upon making music as he raises his four-year-old boy in Japan. This is the second thing that is refreshing about Kindling–its international scope. We read about an Australian food-blogging dad, a travelogue about the baby-loving men of Istanbul, as well as the obligatory furniture craftsman from Brooklyn.

Not all fathers, or even mothers, will relate to the artisan dad who takes as much care in child rearing as sanding his custom bookshelves. But it is undeniable that parenting is a creative act, and it makes perfect sense, at this junction, to consider them in the same light. We have turned child-rearing into high art, on par with our cult-like worship of food. Why not delve deeper into fatherhood and creative pursuits, and examine how the two intersect?

In doing so, of course, Kindling tows a very fine line between an earnest depiction of caring fathers and an eye-rolling caricature of hipster dads. Perez even issues a kind of warning shot before you enter its pages. “If the depictions of fathers in this journal appear as wholesome, may be even uncomfortably precious,” he writes, “that’s because they are. When done with even the smallest amount of care and thought, how could active parenting be anything other than wholesome? While the term may be culturally loaded, our subject requires that we at least not be shy about the sentiment.” 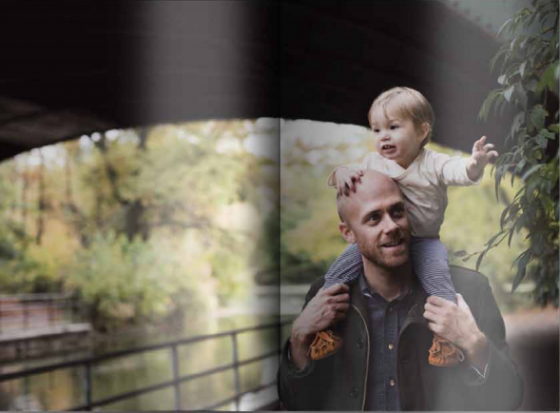 This somewhat girds the reader for the fashion spread of a dapper dad and his adorable girl picnicking in Prospect Park that elicited a wry grin as I flipped through it. My gut reaction was that this is the very fetishization of modern-day fatherhood Perez finds troubling.

There are two kinds of dads we lampoon in our culture, he points out in his “Notes on Kindling”: the hapless father who looks overwhelmed behind a stroller, and the uber-involved dad who makes his child’s toys by hand. Perez is wise enough to admit that the latter is very similar to the fathers you encounter in his journal, but seems to take offense that we may find them ridiculous.

“Instead of being laughed at,” he writes of the doting father, “they are dismissed as caricatures, their devotion too uncomfortable to be taken seriously.”

The fact that my knee-jerk reaction to photos of fashionable fathers strolling with their daughters is to poke fun of them, could mean that I still find caring dads to be a novelty, too rare to be taken taken seriously. Or it could just be that in the context of a literary journal filled with professional photography, these scenes do not appear natural or everyday. They are staged.

I asked Perez whether Kindling was only fetishizing the 21st century dad further. “We aren’t exactly a counterpoint to various fetishizations (comedic, hyper-sincere) in media but [we are] trying to present a more genuine portrayal,” he explained by email. “Our aim is to feature creative men thoughtfully discussing parenting. We hope this is an inspiring model (as opposed to say the anxious yet useful nitty gritty that many parenting sites feature) more than anything.”

Like Perez’s own baby boy, Kindling is a work in progress. The first issue is overwhelmingly skewed toward men who are creative with a capital C–as is Perez. (We previously wrote about him soon after the launch of his art-fundraising dinner series, FEAST.) They’re also very white. But Perez recognizes and promises to fix the omissions. “Already in this first issue there is a troubling lack of racial, cultural, economic, and sexual diversity that we strive to correct in subsequent issues.”

It isn’t a perfect snapshot of all the fathers we know–but the fact that Kindling attempts to capture them, and give them a space to talk about their work as a parent and a person is plenty cool. I look forward to Issue 2.

Kindling’s launch party is this Sunday, January 27 at Cine-Magic Studios in Williamsburg at 2pm.  Brooklyn Brewery is providing beer, Backyard Cooking Company will be serving food, and copies of issue one will be on sale.