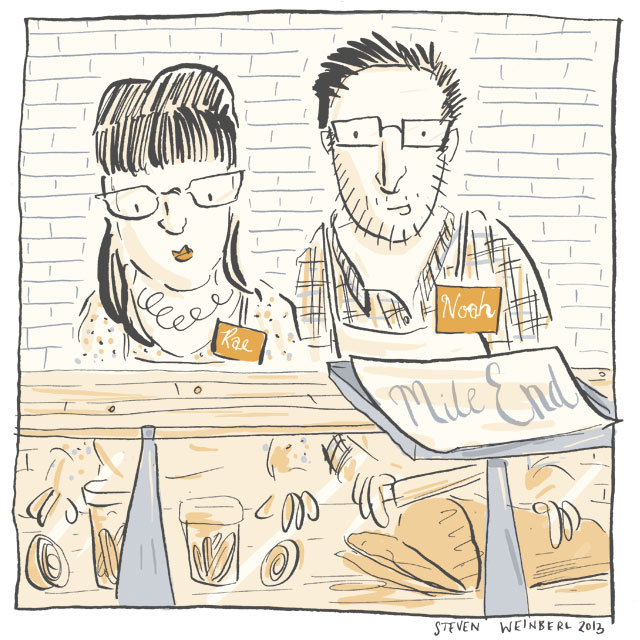 In our series, Five Questions, One Drawing, artist Steven Weinberg interviews and draws a well known Brooklynite each month. Today we present to you Rae and Noah Bernamoff, Park Slope residents since 2007, co-owners of Mile End Delicatessen in Boerum Hill, Mile End Sandwich in NoHo and co-authors of The Mile End Cookbook. Their commissary kitchen in Red Hook, where they smoke all that delicious meat, was badly damaged in Hurricane Sandy.

When you leave Brooklyn and come back what’s the first thing you do?
Rae: We don’t get away that much, but upon return always head to the deli to check in.

Noah: I call my Jewish mother to tell her I returned home and that I’m fine.

You commute by train/bike/car/walk/other? Why?
R: We have a car, which is really the most efficient way to get to Red Hook.  Our Jetta Sportwagen is often used by Noah for schlepping and running between locations and meetings, so I most regularly hop on the subway to get places.  Conveniently the B63 runs pretty express from our home off of 5th Avenue in Park Slope to the deli on Hoyt and Atlantic, so that can be a good option if the weather is unwalkable.  I’ll also admit that I’m pretty tight with the folks at Family Car Service, which is by far the most reliable car service in the neighborhood.

N: Car seems to be a necessary evil that actually makes me yearn for the subway.  The subway is one of the most uniquely New York experiences that anyone can have.  When I get a chance, I try to bike, but more often than not, I find some excuse not to.

How many different places have you lived in Brooklyn? Which is your favorite?
R: We settled in Park Slope when we moved from Montreal six years ago and haven’t relocated since.  Noah likes to joke about living in “Park Schlep” and we can sometimes get down on the limited dining options in the nabe, but overall it’s a very comfortable and friendly place to live.  We’ve always dreamed about moving to Red Hook, and might actually make that happen one day.

N: Sad to say that I’ve only lived in Park Slope.  So, basically, any other neighborhood in Brooklyn is my favorite.

What’s your ideal Brooklyn date?
R: When you own a small business with your husband there are few official “dates,” but when we can sneak away we head to spots outside of our usual radius.  A hearty meal at favorites like Tanoreen in Bay Ridge or Spicy Bampa in Bensonhurst followed by a long walk is pretty ideal.

N: Buratta and olive oil in the backyard of Frankies, some sparkly, a bonfire.

Mile End’s commercial kitchen in Red Hook was quite damaged by Hurricane Sandy. So, if a lot of delis name sandwiches, and other menu items after people or things, what would your “Sandy” menu item be?
R: Sandy hit with a ton of force and was gut wrenching and destructive, so it would probably be something like a “kitchen sink poutine.”  A total gut bomb that rips its way through your insides, and that you’re pretty upset about the next day. Honestly, I’m not rushing to name anything after that storm, so don’t plan to find it on our menu anytime soon.

N: Unwieldy fatty soup with little bits of unidentifiable matter floating in it.