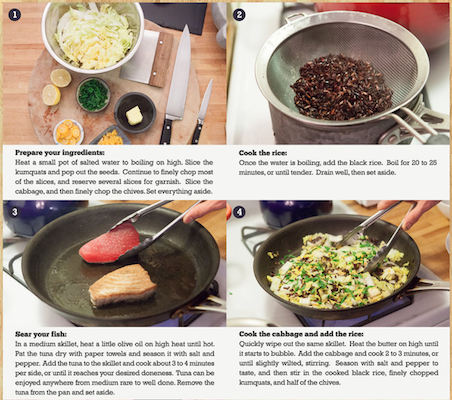 My boyfriend and I both love to cook, and it’s not unusual for one or both of us to devote a Saturday or Sunday to collecting ingredients at the farmer’s market or the butcher shop and dutifully preparing an ambitious, time-consuming dinner that is hearty and healthy and, if I do say so myself, delicious. When it comes to regular old weeknights, though, dinner chez moi can be a pretty sad state of affairs.

One night not long ago, we halfheartedly argued over which Seamless Web option was least unappealing until all the restaurants stopped delivery, and he ended up getting a taco from the bodega at the end of our block while I dined on dried out baby carrots that I found in the back of the fridge.  After that low point, I finally decided to try Blue Apron, a meal delivery service based in East Williamsburg that a friend of mine had been raving about.

The theory behind Blue Apron is that eliminating the annoying parts of making everyday meals–the menu planning and the trip to the grocery store–will get people in the kitchen making homecooked, nutritious dinners even on nights when they had to work late and the R train home seemed like it was being pulled by a lone mule. For $60 a week, we now receive a box (shipped via FedEx and left on my doormanless stoop) containing everything we need to make three complete dinners for two people, including detailed recipe cards with pictures and premeasured amounts of incredibly fresh ingredients. (Blue Apron assumes that everyone has salt, pepper, and olive oil but provides everything else.)

I can’t overstate the quality of the produce and meat–it is restaurant-grade, local, and sustainable and it blows any of the grocery stores near me and FreshDirect out of the water. Plus the recipes are easy to follow for even novice cooks and take about half an hour to prepare from start to finish, yet are sophisticated enough to have us cooking with things like yuzu and ras el hanout. They also yield meals that are 500-700 calories per serving, and can provide a startling lesson in portion control when, for example, you are confronted with a dimebag of Israeli couscous and told that it is the appropriate amount for two people.

Another sneaky health benefit to the plan is that the “meat” package we opted for (as opposed to the vegetarian) consists of one chicken recipe, one pork or beef recipe, and one fish recipe. Despite my best intentions, if I am really honest with myself I have probably successfully made fish at home about twice ever, and now I am guaranteed to eat it at least once a week, which is a big plus.

Some of the efforts (Korean chicken lettuce wraps that were perfectly spiced and delicious) have been more successful than others (a pork chop covered with an ill-advised combo of apples, kohlrabi, scallions, pistachios and tahini), but I can honestly say that all of it has been an upgrade from the usual weeknight fare in my household. At just $10 per meal per person, it winds up being cheaper than ordering in and not really any more expensive than buying the food myself and cooking it, especially after factoring in the time spent shopping and the stuff that inevitably goes to waste sitting in my fridge waiting for me to figure out what to do with it.

The best part is that feeding myself on the weeknights has gone from being a chore to something I actually look forward to, a development so surprising that I had to pass it on!