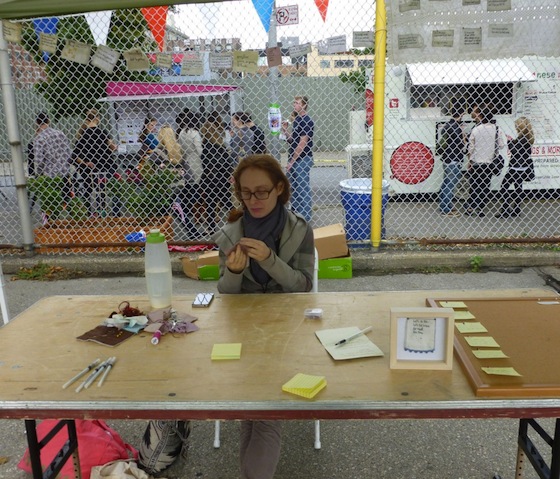 Iviva Olenick at the Dumbo Arts Festival this past fall, where she was collecting and embroidering confessions.

Twitter and embroidery sit at opposite ends of the spectrum of expression, but Iviva Olenick has found a way to marry the ephemeral message with everlasting handiwork in her latest project, @EmbroideryPoems.

Through the end of the year, thanks in part to a grant administered by the Brooklyn Arts Council, the fiber artist is collecting and embroidering Twitter “poems” sent to @IvivaOlenick or @EmbroideryPoems (or her Facebook page).

Initially Olenick was concerned that her call for poetry would turn people off, but already she has a stockpile of verse to stitch. “The hilarious part about embroidering tweets is that I can never keep up,” she said by email. You can see her work-in-progress on her Tumblr and at a June 6 poetry reading at 61 Local, until she concludes the project with an exhibit next fall or winter. (If you want a guarantee that your words will appear in thread, you can commission her for custom work.)

This is not the first time the digital realm has inspired her to embroider. In 2002, after a spate of online dating, she used the medium to record her romantic encounters. Now in the age of social media, she still finds comfort in the needle and thread.

“For years, I’ve felt as though I needed an activity to counter the fast pace of rapid-fire digital missives, and have intuitively turned to embroidery as a kind of antidote,” said Olenick, a Brooklyn native who grew up in East Flatbush, and now lives in Boerum Hill. “I tend to experience change as a form of loss, so for me, rendering something ephemeral, like a tweet, in stitch makes the tweet more permanent by giving it a physical form.” 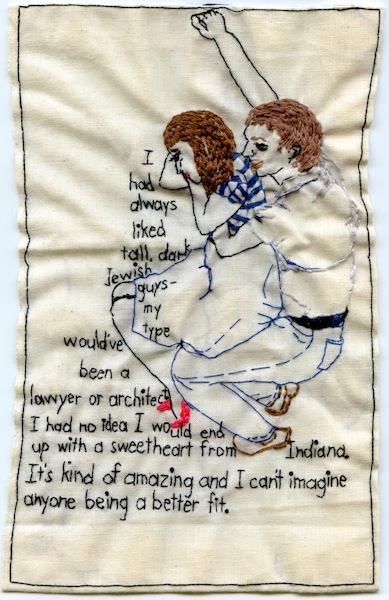 It was actually an earlier project, The Brooklyn Love Exchange, that encouraged her to embrace Twitter. In it, she gathered the love stories of friends and strangers to create an embroidered map of Brooklyn love and other artworks. After the overwhelming response she received, often from people she’d never met, she decided to cast a wider, more interactive net. “Now I can use Twitter to generate more art, and to celebrate language, rather than fearing its demise.”

@EmbroideryPoems often center on love, too. (How could poetry not?) The musings of writer Spencer Madsen (@spencermadsen) on OKCupid and his dating life have already garnered two embroidered tweets (“Looking to act out? Make some mistakes? Be self-destructive? Date me.” is one.) And Olenick often adds her own romantic thoughts to the mix. “You mirror parts of me I didn’t know existed. I hope our journeys coincide long enough for me to understand us” is one of her own Twitter poems.

“I think our sole purpose in life is to love,” said Olenick. “By that I don’t just mean romantic love, but strong bonds and connections that reinforce who we are and our sense of purpose and place in the universe. In the face of change and stress, the friend who has known you forever is the greatest comfort. Romantic love interests me because it is so often ephemeral. The flexibility and forgiveness we shower on friends and family we don’t often give our romantic partners. It’s a strange double standard.”

Of course, that’s just Olenick’s take. Whatever your impression of love, today is the perfect day to share it @EmbroideryPoems.