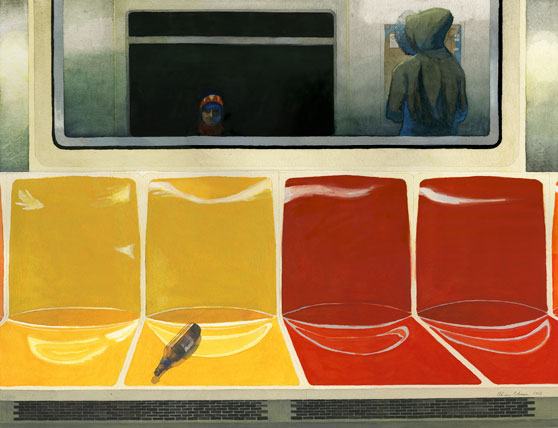 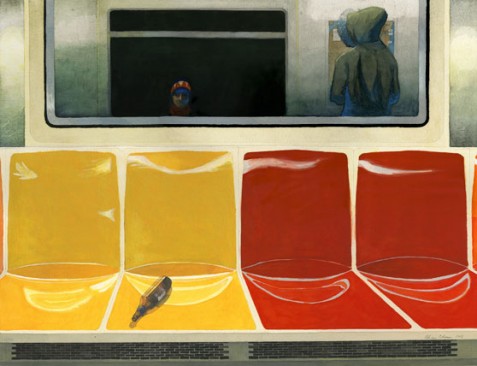 Go: Brooklyn, an exhibition of works by Brooklyn artists, closes this weekend at the Brooklyn Museum on Feb. 24. Visitors nominated their favorite 10 artists from the 1,708 who participated in a museum-sponsored, open-studio weekend in September. Museum curators then selected five finalist to include in a group showcase, which opened Dec. 1. According to the museum, 18,000 people visited studios across the borough and voted for their favorites.

Go: Brooklyn was inspired by Art Prize, a publicly-juried competition for artists in Grand Rapids, Mich. The winner of Art Prize receives $200,000; for Go: Brooklyn, the prize was inclusion in the exhibition. The open-studio weekend generated a lot of excitement for artists and viewers alike in advance of the exhibition itself.

“I had  some really interesting conversations about my work and got a lot of positive feedback,” says Naomi Safran-Hon, a participating artist. “It is really rare to be present while people comment on your work, since usually we don’t stand next to our work at exhibitions to hear the feedback and comments.” 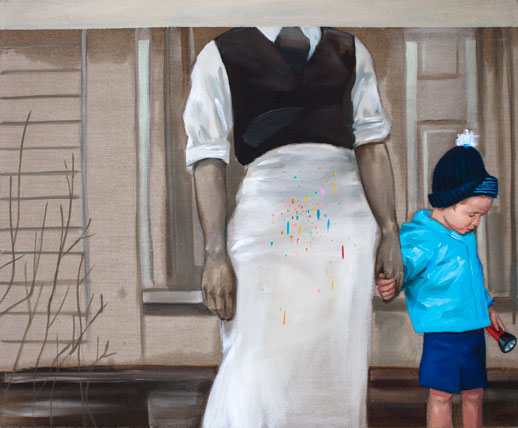 “Before My Time” by Oliver Jeffers

Fellow participating artists, Oliver Jeffers, and Yeon Ji Yoo, also praised the opportunity for conversations with visitors about their work and the exposure Go: Brooklyn brought to art and neighborhoods they might not have otherwise seen or visited.

The exhibit’s limited real estate however–a small second floor hallway that visitors could easily miss or walk through–somewhat diminishes that initial excitement, making the final product of that open-studio weekend feel more like an afterthought than a culmination, though it’s still well worth seeking out.

The five winners, Gabrielle Watson, Oliver Jeffers, Adrian Coleman, Naomi Safran-Hon and Yeon Ji Yoo, are all painters. Though Yoo, whose work addresses death and decay in nature and the transformation between life and death, presented a mix of sculpture and painting. As a result, hers is one of the strongest sections in the exhibit. Her bare, white trees that incongruously sprout out of the museum floor take the viewer out of the gallery momentarily and into a cold, bleak forest. This was a great contrast to her paintings visually detailing her grandmother’s descent into dementia that felt less transcendent by comparison.

Safran-Hon’s work is the most political, showing empty, decaying interiors of homes in her old neighborhood of Haifa, Israel. Lace and cement show the contrast between the comfort and beauty of materials we use to make our spaces homes and the stark, grey cement lurking underneath. Maps at the bottom of much of the work further emphasize the power of divisions and marking territory, raising important political, as well as artistic, questions.

Coleman, the youngest participant in the show, paints watercolors of subway scenes, including my favorite, “Early Morning Subway Ride,” which depicts an empty beer bottle rolling languidly along empty seats as the sun comes up behind the train. Coleman’s work is a fresh take on watercolors.

Watson’s oil portraits of friends and lovers make them look as if they’re glowing from the inside. They’re just the right side of garish–sometimes the faces look as if they are melting–but still capture something essential about the subject.

Jeffers takes a portrait and paints contrasting colors over parts of the faces or bodies, inviting viewers to debate what might be underneath. Sometimes the faces remain visible, sometimes just the lower bodies, but it certainly provokes discussion over why these sections were obscured and what that means, if anything.

While a spokeswoman told Brooklyn Based that the museum has no plans to repeat the exhibit, we’re hoping they’ll change their minds. Go: Brooklyn provides an opportunity for viewers to be curators; artists to gain exposure; and visitors to gain insight into Brooklyn’s vibrant art scene, all in one show.