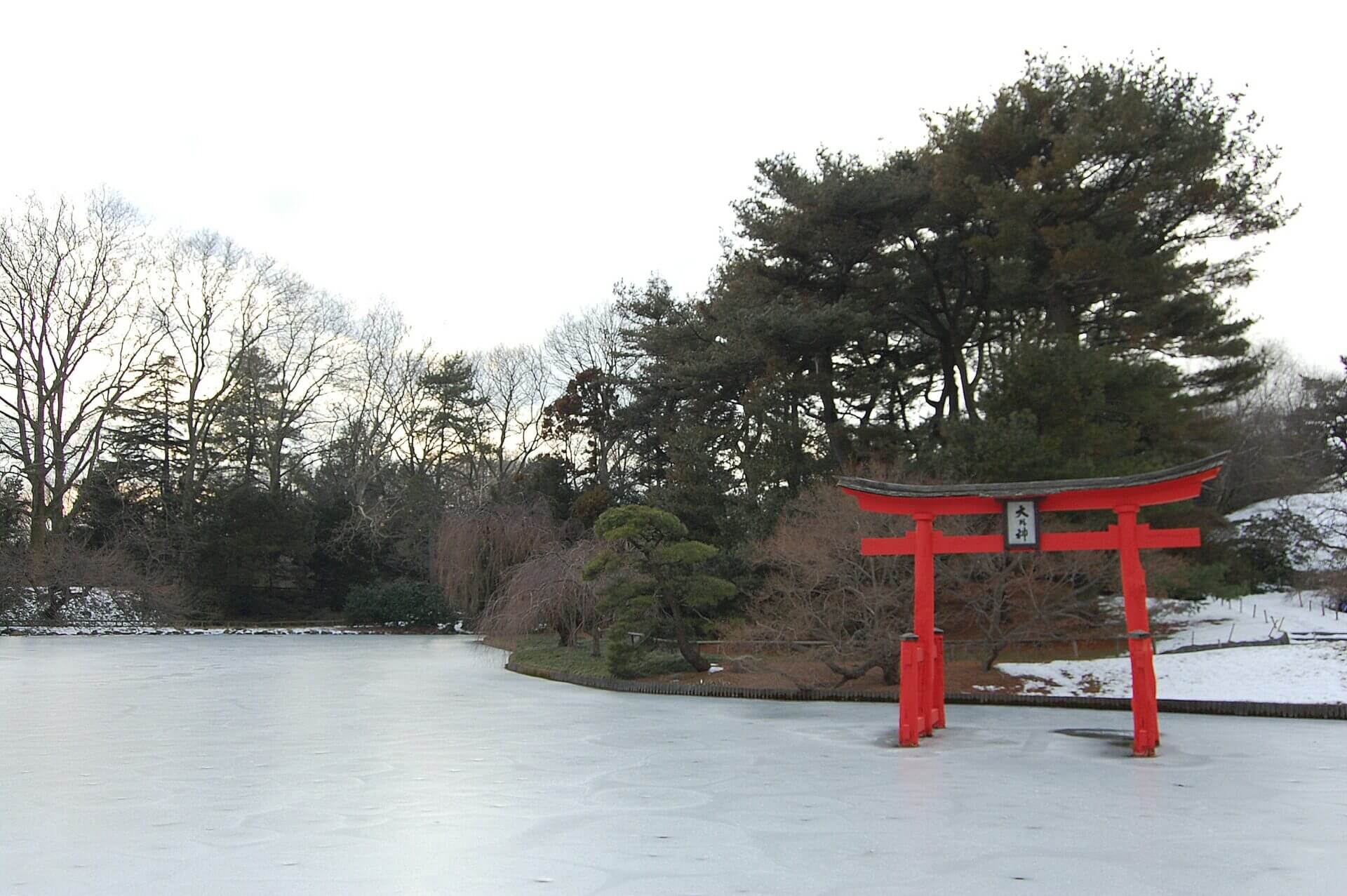 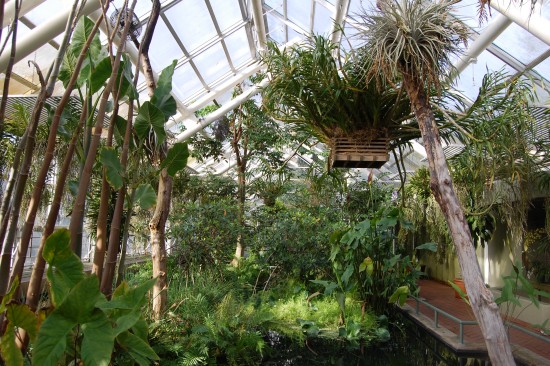 The Aquatic House is  an absolute must-visit at this time of year, when the garden displays a large selection of its showiest orchids. Photo: Lauren Rothman

In the winter, when even a short neighborhood outing requires the piling-on of layer after layer, not many New Yorkers think to visit the Botanic Garden.

“The garden is so special in the winter, but spending a day here is not the first thing people think of,” Kate Blumm, the garden’s communications manager, said.

What many people don’t know is that the Botanic Garden boasts a robust winter lineup in its greenhouses, which burst with life even during the long, cold months between November and March. In the Steinhardt Conservatory, a two-story building made up of glass-walled pavilions, winter visitors can experience five distinct plant environments.

In the Aquatic House, many of the garden’s rare and showy orchids are currently in full bloom. And in the conservatory’s Warm Temperate Pavilion, South African bulbs are flowering. 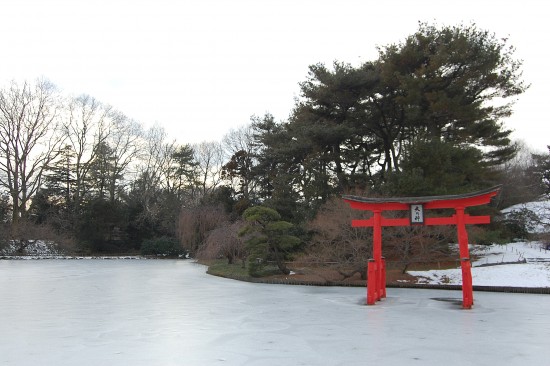 For hardier souls eager to spend as much time outdoors as in, the garden offers a wealth of sensory stimulation. While you won’t find the expanse of green and blooms that display in the spring, plants such as evergreen trees and hardy herbs do grow in the cold.

“A lot of people assume that all plants are dead during the winter,” Blumm said. “That’s a myth we’re trying to dispel.”

Perhaps the garden’s greatest selling point at this time of year is the free admission offered on winter weekdays. The discount ends on March 1, when the garden’s summer hours begin.

The following guide to visiting the garden makes use of Blumm’s suggested stops for a winter tour. Both indoor and outdoor destinations are included, and the visit takes about 45 minutes to one hour. 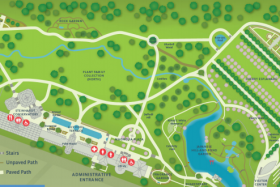 A full map of the Garden is online at bbg.org/discover/gardens

First Stop: Visitor Center
The garden’s visitor center opened in May 2012 and is an environmentally sustainable building with a living roof planted with meadow grasses, flowering perennials and bulbs. Inside, glass walls let in light and warmth. “This building is the opposite of dark and shadowy,” Blumm said, adding that the center is a good choice for ducking inside when it gets too cold out.

Second Stop: The Overlook
Located just up the stairs from the Visitor Center is the Overlook, a small promenade offering a spectacular view of the garden’s beloved Cherry Esplanade, which stretches out below. The benches here offer a comfortable place to take in the sights of the garden’s highest point. The Overlook is also one of the quietest spots in the garden. “Up here, you don’t notice the clatter of the city streets quite so much,” Blumm said.

Third Stop: Rock Garden
Descending from the Overlook to walk through Cherry Esplanade to the western edge of the garden will bring you to the Rock Garden, a boulder-strewn slope planted with a variety of woodland plants and evergreens. “There’s a lot of texture and visual interest to this spot, especially when the rocks have a little snow on them,” Blumm said. Some of the Rock Garden’s boulders have been on site since 1910, when the Botanic Garden was founded. 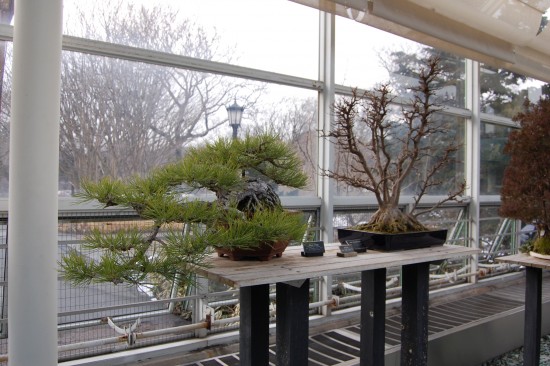 Fourth Stop: The Steinhardt Conservatory
After being out in the cold, stepping into the warm, humid environment of the conservatory’s entry garden is a bit of a shock to the system—in a good way. Inside the glass walls of the conservatory, five discrete environments burst with life, and, yes, lots of colorful flowers. We visited them all:

The Aquatic House
The Aquatic House features a variety of aquatic and wet environment plants growing around a six-foot-deep pool. It’s an absolute must-visit at this time of year, when the garden displays a large selection of its showiest orchids. Walking through the humid greenhouse—“it’s like being in a steam room at a spa, only much more beautiful,” Blumm said—your eye is drawn upward along the orchids’ long, strong roots, which hang down into the path, to the canopy where the bright flowers are on display.

The Bonsai Museum
The Bonsai Museum’s small, carefully tended trees are a perennial visitors’ favorite. The garden’s collection of about 350 trees is the second oldest in the country and one of the largest on public display outside Japan, with as many as 30 specimens on exhibit in the museum at any given time. Julian Velasco, the curator, selects the bonsais based on season, and in winter he includes a selection of leafless deciduous specimens that echo the shapes of trees growing outside the museum’s glass walls. “When you look at these bonsais, and then past them to the garden’s trees, you get that ‘inside-outside’ feeling that’s such a big part of the experience here,” Blumm said.

The Desert Pavilion
On a clear winter day, the Desert Pavilion floods with sunshine. “The canopy here isn’t dense, so this building is always the brightest one in the conservatory,”  Blumm said. The dry, rocky environment is planted with cacti, succulents and desert wildflowers, and features a large Mesquite tree, native to the American Southwest, at its center.

The Tropical House
The hot, lush environment found in the conservatory’s Tropical House is “the most opposite of winter,” Blumm said. “It feels completely transformative inside here.” The 6,000-square-foot greenhouse—the largest in the conservatory—soars 65 feet high, allowing waterfalls to drop into pools below and trees like the banana to reach their natural height. 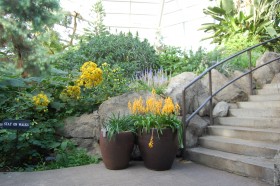 For some winter color in the Warm Temperate Pavilion, check out the garden’s collection of South African bulbs. Photo: Lauren Rothman

The Warm Temperate Pavilion
This greenhouse houses trees, shrubs, vines and ground covers that represent the diversity of plant life in warm temperate regions around the world. For some winter color, check out the garden’s collection of South African bulbs such as the Cape Cowslip, a tubular, canary-yellow flower that grows in clusters along a bright green stem. The bulbs continue to flower well into March.

Final Stop: Japanese Hill-and-Pond Garden
After warming up inside the garden’s greenhouses, it’s time for one last outdoor stop and quite possibly the main attraction of the visit: the iconic Japanese Hill-and-Pond Garden. Constructed in 1914 and 1915, it’s one of the oldest and most-visited Japanese-inspired gardens outside Japan. The garden’s large pond is marked by its distinctive, bright red toriji, or wooden gateway, and waterfalls, bridges, and carefully arranged rocks punctuate the landscape. It’s a stunning spot in the winter, when the pond freezes and snowdrifts abound. “When it snows, the garden is one of the last places in the city where you can find pristine white snow,” Blumm said.

The Brooklyn Botanic Garden is open Tuesday through Friday from 8am to 4:30pm, and Saturday and Sunday from 10am to 4:30pm. Weekday admission is free through the end of the month.