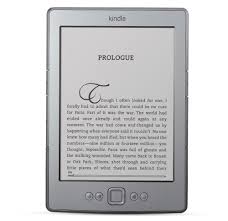 I truly believed that it wasn’t going to catch on. “There, there” I’d say to authors with books on the verge of publication, “e-books will never be nearly as big a deal as real books.” Why was I so sure? For a few reasons, but mostly because I’ve always had an accurate cultural barometer, so since e-books didn’t interest me, why would they interest the world?

Here’s another reason why I wasn’t sold: The book is the cockroach of the media world–nothing can kill it.  When newspapers first became widespread, people said it would be the death of the book, same goes for magazines, same goes for TV and same goes for audio books.

Richard Nash of Red Lemonade and Small Demons made a great argument when I interviewed him a while back.  Many of us see the same book cover again and again on the subways and in parks and we wonder what it is that’s got so many people reading it. This is how bestsellers are often made.  When Kindles came out I said they were too ugly, that Amazon was keeping too tight a stranglehold on the market by forcing users to buy directly from their website.  Then, the iPad came out and I still didn’t buy it. “People will not read all their books on that,” I’d say, “that thing is primarily for playing Angry Birds.”

I’ll posit that, up to a point, I was right about the above. Up to a point, that is, because as the technology of e-readers gets better, the e-reader itself becomes more alluring. Still, I’ve resisted them with steadfast dedication.  I simply don’t want my book to come out without a physical copy.  I don’t. You can pump me full of nanotechnology and turn my blood cells into robot dongles, but please, don’t take my books.

Then, I got a Kindle as a gift.

It was totally free, someone somewhere had some kind of hook up. It’s been only about a month, but I’ve certainly re-calibrated my feelings about e-readers.  I’ve thus far read three books on my Kindle. The first two, Nicholson Baker’s House of Holes, and Chad Kultgen’s Men Women and Children, because I wanted to have both books the moment it occurred to me to read them. The third book, Dan Brown’s Angels and Demons, because I did not want to pay the full cost of a book which I was reading because of a fleeting fascination with the Illuminati.

I feel as though the books I read on the Kindle are falling into two categories: books I’m reading because there’s some kind of specific knowledge I’m trying to glean from them (I’ve recently loaded a few how to-books on my Kindle), and books that I just can’t wait for. To be fair, the latter category I’m likely to buy the physical copy of as soon as it’s convenient.  Similarly, I believe periodicals could have an awesome future on e-readers. Partly because the price point doesn’t seem to come down as much as it does on books when made electronic.  Similarly, the audio book technology of switching from listening to reading, seems to have a promising future. Amazon neutered a lot of publishers by making the used books marketplace so prevalent. The most redeeming thing about e-books in my opinion, is that you can’t sell a used e-book (though this may soon change, too),  and that some money from e-book sales go into the author’s pocket.

As someone who writes about books as part of my livelihood, I often get send review copies and I’ve started to wish they came with digital versions as well–often I’m working on reading more books than I can carry.

Still there are some books that I simply will not read any other way than on paper. Joshua Mohr’s Fight Song, one of my favorite books of the new year is a great example.  The books that create a world that I cannot wait but envelop myself in, I need to hold them, I need to know what their cover looks like and how the pages are cut.

The point is, having an e-reader has altered my feelings about them.  However, I’m still not on board with switching from paper to digital entirely.  For textbooks, sure, absolutely. You buy a textbook to siphon the knowledge from it and move on, but for “1984,” absolutely not. And for “The Sun Also Rises”? I’d rather eat a sundae out of the kitchen sink.

I’ve always been a believer in not running and hiding from technology, but harnessing it, and understanding how to make it work for me. So it pains me to take a stand against e-readers, but I have one major concern about the effect they will have on publishing, authors, and books in general.

My biggest fear when it comes to e-books lies in the piracy problem.  The Pirate Bay’s e-book section is ever-growing.  I understand completely why people pirate, the problem is the types of people who pirate are often the types of people who buy books, the knowledge seekers, and many of them will go out and buy a book if they can’t find the Rapidshare link for it.  If publishing thrusts the entirety of their revenue into digital books, pirates will descend upon it like locusts. People will never stop reading paper books entirely, unless forced.  So don’t give up. Restructure, the model and print fewer books, but don’t give up on physical books.  I do not believe in replacing books with 1’s and 0’s and the prettiest, most advanced, free e-reading device would not sway me otherwise.