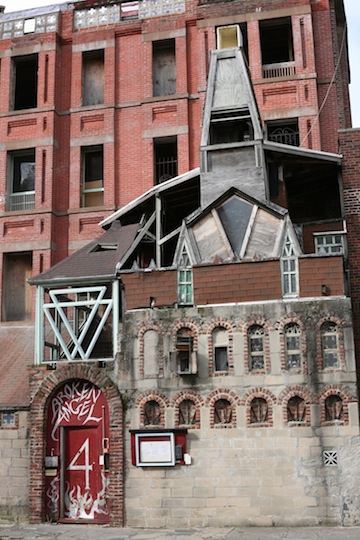 Artist Arthur Wood bought his home in Clinton Hill over 30 years ago for $2,000–less than most people in the area now pay per month in rent. He dubbed it Broken Angel, after the massive glass-paned sculpture of the same name that sits atop its facade, and transformed it into a series of studios and eccentric installations made with garbage and reclaimed items. Broken Angel became a neighborhood institution (or an eyesore depending on your angle), attracting daily crowds of admirers, as well as the attention of those who’d tear it down.

Wood, who’s staved off foreclosure since a fire damaged the building in 2006, was served his final eviction notice earlier this week; he’s been ordered out effective tomorrow, March 15. With the fighting now through, Wood’s neighbors have banded together to celebrate him and his opus one last time with a block party tomorrow from 4-8pm and an after party to follow at Irondale Center, located at 85 S. Oxford St. A $10 cover at Irondale will go toward the Broken Angel Fund to raise money for Wood before he closes the building’s bright red door with the giant no. 4 for good.

“It is really just a chance to come by and say ‘you did a really nice thing building your art for all to see,'” says Shannon Kerner, a friend, neighbor  and somewhat spokesperson for Wood, who is decidedly sad to see him go. (Wood declined to be interviewed for this article.) “We’ve been friends since about 2004 when I would walk my dog past his house everyday and chat, and then we started walking our dogs together, but we generally found a kinship in art and the life of a bohemian artist.”

Friday’s celebration isn’t the first block party to have Broken Angel as a backdrop. Before the legal battles, the site at 4 Downing Street served as the setting for Dave Chappelle’s 2005 film, Block Party, with step teams and marching bands parading past and a Kanye West street concert.

It’s unlikely West will return for tomorrow’s sendoff, but the event still promises bands, DJs and live performances; Kerner encourages everyone to come and bring their grandmothers and best friends, as well as their dancing shoes to bid adieu to Broken Angel.

“This type of structure belongs in New York, in Brooklyn,” Kerner says. “We need places like this. Too often art is under appreciated and is considered something that can [only] happen before rich people take an interest in the neighborhood. We need to stop tearing down the great work of our nation’s most prolific avant garde artists and start seeing that art is important too. Whether humans realize it or not, when they see great art, even just a flash of an image, which took years to make, even the most boring person is affected in some way.”