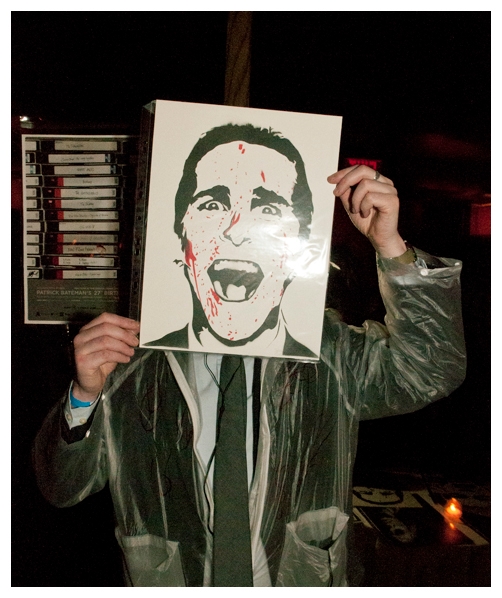 It’s a Saturday evening and I’m standing in a line outside the Tribeca Grand wearing a crushed-velvet-and-crinoline cocktail dress, alongside similarly dressed women and men in suits and Ray-Bans. Once we’re let into the basement lounge, sharp looking barmen serve up $15 glasses of champagne, DJs blast Huey Lewis tracks, and models straight out of a Robert Palmer video mingle with the crowd. It’s Patrick Bateman’s 27th birthday party, and BBQ Films have managed to make it feel like we’ve all walked straight into the set of American Psycho.

Every few months, BBQ Films comes up with a screening-and-party idea that’s so perfect that it leaves you wondering why no one else has thought of it before. Recently, they held a Derelicte fashion show for Zoolander and the Party at the Moon Tower for Dazed and Confused, both at Windmill Studios NYC in Williamsburg. Their roots, though, weren’t quite as grand. BBQ Films was founded back in 2007, when founder Gabriel Rhoads and his friends would get together, drink beer, grill, and watch films on a rooftop in Spanish Harlem. “Our film parties got bigger over time, and we soon outgrew the roof,” says Gabriel. In 2011, they hosted the first event that was a precursor to the huge parties they host now, a screening of Below New York, about subway musicians. “We brought BBQ Films down from the roof, and the musicians up from the subway, and hosted an immersion in their music. We had a brewer concoct a special beer to match the movie, and the musicians harmonized with the film, and sang the movie off the screen. One of our guests approached me at the end and said, ‘thank you: I fell in love with New York again tonight.’ Right then, we knew we had something.”

There’s not an exact science to what films BBQ Films picks, though they do try to ride the cultural zeitgeist, choosing to highlight Zoolander as its sequel was being filmed and as Fashion Week approached. “With American Psycho,” Gabriel says, “we started noticing some signs the movie was about to have a resurgence of interest, and we were right—with recent announcements, shows, and lampoons—all around the time of our show.”

The screening itself took place in several different rooms—appropriate to the class-obsessed American Psycho, more expensive tickets got you access to a more plush screening room. I’d only seen the film once before, during a summer thunderstorm in my apartment, and watching it in a crowd of suit-wearing dudes and formal-wearing women with a glass of expensive champagne in my hand was a revelation. The movie was even funnier and even more relevant than I remembered it to be.

“At the end of the day, all of our guests showed up and embraced the challenge and the humor of the movie,” Gabriel says. “Some folks were in full on costume gore makeup—it was stunning. My favorite part of these evenings is really just seeing what our audience comes up with when they show up for our big movie night parties.”