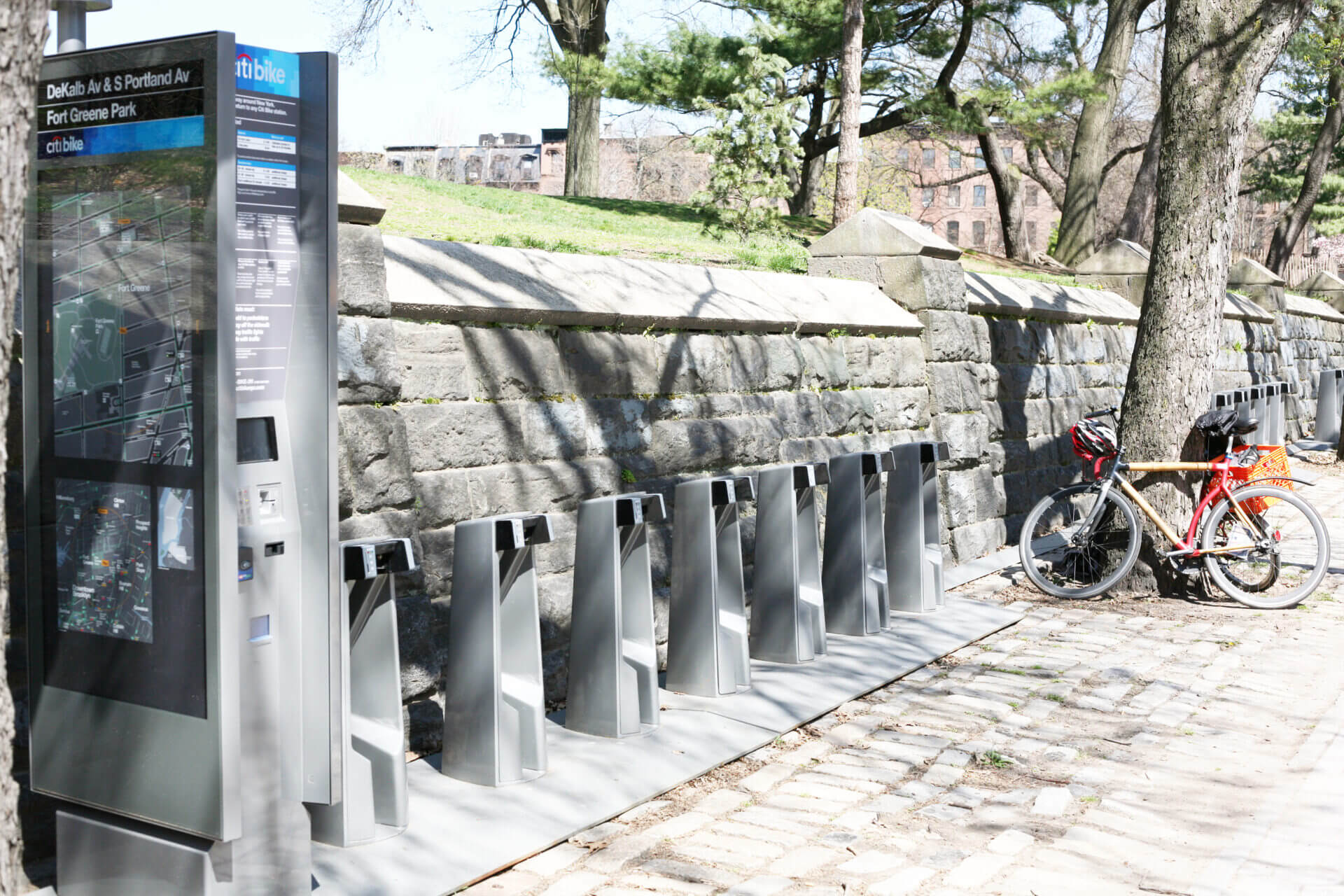 Bike stations, like these on Dekalb Avenue outside Fort Greene Park, started being installed earlier this month ahead of the NYC Bike Share program expected to be up and running in May. Photo: Daniel Broadhurst

Though the gray skies and chilly temperatures today belie the season, spring has arrived; summer is not far behind; and cyclists of all stripes are back out on the road in force. Here are a few of the bicycle-centric news tidbits we’ve been hearing about lately. Happy riding and don’t forget to wear your helmet. Rides and events Mark your calendar for May 11 when the Brooklyn Bike Jumble returns to the Old Stone House in Washington Park in Park Slope. Dozens of vendors selling new and used bikes, parts and accessories will be there with the new handlebars or banana seat of your dreams. On the same day, the Brooklyn Public Library is holding Bike the Branches, a self-guided ride visiting the library neighborhood branches around the borough. You can visit one or all 60 if you’re feeling ambitious, and the ride is a fundraiser for the library, with a finish line celebration at Grand Army Plaza from 5pm to 7pm.

On May 17, Transportation Alternatives is hosting Bike to Work Day. Riders around the city can stop and grab breakfast and coffee from Brooklyn Roasting Company at fueling stations (Brooklyn stops include stations near the Brooklyn, Manhattan and Williamsburg bridges), and then join the after-work party at Brooklyn Bridge Park with music, food and beer. Prepare to (bike) share Docking stations for the long awaited NYC Bike Share program started popping up like tulips in various neighborhoods earlier this month. They are the first sign of forward motion from the program in months and a harbinger of what’s to come in May when the bike share program is supposed to officially start–unless you work in the Brooklyn Navy Yard where people have been reportedly testing out the bikes since late last year.  Membership sign up started April 15, and while you’ll still have to wait a little longer to actually access any of the thousands of bright, shiny blue bikes soon to be available for rental, the time at least appears to be nigh, though no official word on when just yet. “The bikes aren’t coming in until all of the stations are installed in both Brooklyn and Manhattan, so no set launch date yet,” says Dani Simons, director of marketing for NYC Bike Share. “We’re still on track for sometime in May.”
[youtube=http://youtu.be/AqvEqvbaIbk]
Advocate for safer streets As The New York Times reported last fall, traffic fatalities for pedestrians and cyclists have been on the rise as of late, with 176 cyclists or pedestrians killed from July 2011 through June 2012. Cyclist and pedestrian advocates say that the New York City Police Department has given drivers a pass by not fully investigating fatal crashes, then refusing to release crash reports to the public or even to the families of victims. Time’s Up, an environmental advocacy group has started My Living Street Will in response. Pedestrians and cyclists alike are invited to make a video and post it on the My Living Street Will page, demanding that the NYPD conduct a full criminal investigation and make the report public if they are struck and killed by a car. Keegan Stephan, a Time’s Up member who was instrumental in getting the campaign off the ground, told BB that the campaign is designed to raise awareness and to create a stronger legal position for pedestrians and cyclists. “Legally it’s hard to make a strong case that it’s the driver’s fault,” says Stephan. “The NYPD takes the driver’s word for it. Not releasing these reports perpetuates the notion that pedestrians and cyclists are at fault for their own deaths.” More than two dozen pedestrians and cyclists have posted living street wills so far. You can add yours by tweeting the link @StreetWillsNYC, posting it to their Facebook page, or emailing mylivingstreetwill@gmail.com. “The NYPD needs to be enforcing traffic violations,” says Stephan. “They rarely write speeding tickets, and it should be considered a crime like any other crime that could kill someone.”