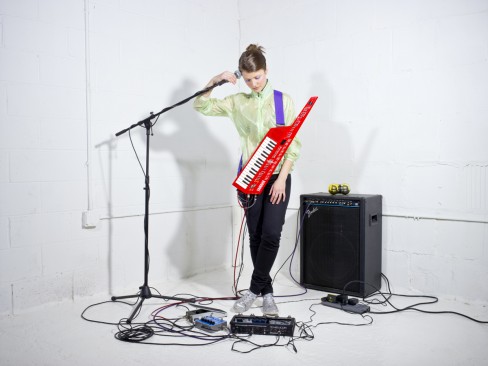 Olga Bell will be performing on April 25 at Crossing Brooklyn Ferry at BAM, 10:15 p.m., $40 for the entire day of performances.

With her experience playing with artists like Das Racist, Chairlift and Dirty Projectors it’s surprising to learn that singer/keyboardist Olga Bell is new the world of playing in bands. In actuality, she was groomed to be a classical pianist when she attended Boston’s New England Conservatory as a student. “I find myself really lamenting that fact,” Bell tells me recently. “I’m curious to see how my life would have panned out if I had been in bands–maybe I would have rebelled and got into classical music. Curiously enough, I’ve never been in bands or really songwriting growing up.”

She may have been late to the rock scene, but Bell is already racking up an impressive list of collaborating credits accentuated by her current gig as as a member of Dirty Projectors. At this year’s three-day Crossing Brooklyn Ferry festival at the Brooklyn Academy of Music, audiences will witness Bell the solo artist when she performs there on April 25. Although she had a backing band accompany her in the past, Olga has been performing as a one-woman band as of late, using samplers and keyboards. The material from her set list at the festival will include songs from her 2011 album, Diamonite.

Her participation in Crossing Brooklyn Ferry  goes back to her longtime friendship with the festival’s curators, Aaron and Bryce Dessner of The National.“I don’t even remember  the exact moment when I met Bryce,” she says. “I think I met Bryce through Judd Greenstein, who is a composer and a close friend of mine. I played Crossing Brooklyn Festival last year and I was talking to Bryce about doing my own thing for it this year, and it worked out, so far.” (laughs)

Her sound has been mentioned in the same breath as Bjork and Radiohead, and it’s understandable given the atmospheric and electronic textures they have in common. “They’re definitely my biggest influences,” Bell says about those aforementioned artists. “I have no qualms, I think it’s really silly when people try to hide or somehow wail against the artists who clearly and beautifully influenced their work. I’ve gotten the Bjork comparison the most I guess and I think it’s pretty natural for people when they’re faced with something new that they’ve haven’t heard before to reach for something familiar, like a foothold from which to think, and I don’t think that anybody could really be reprimanded for that. So I hope people can move past the inevitable comparisons as they do with any artist.” 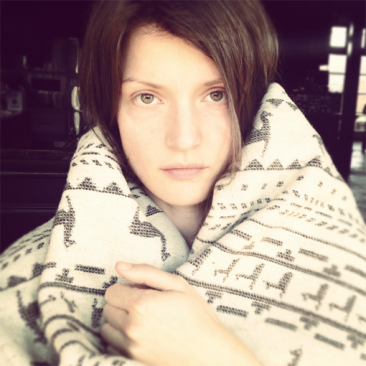 Bell was born in Russia and moved to Anchorage, Alaska with her mom when she was 7. For most of her childhood, she learned piano through her teacher, Svetlana Velichko, until Olga went on to study at the New England Conservatory. “I can’t imagine myself now doing anything but music,” she says. “I didn’t get into a grad program that I really wanted. It made me stop the whole train and really for the first time consider in specific what kind of music would make me happy and whether I was in a field in which I can see myself making the greatest contribution and I don’t believe that being a classical pianist is that field for me. I think what I’m doing now is more productive and just a better way for me to mark my place in the music world.”

She took a deferral for a year from attending graduate school for classical piano and moved to New York where her stepbrother and stepsister were living. During that period, Bell supported herself by working on off-Broadway shows and also dabbled into acting; she even entertained the idea of working at MTV. “More and more I started to write my own music,” she says, “and kind of found my way back to performing in an entirely different way than I ever had before in my life where I was singing and performing original material. Slowly that became more and more electronic.

Chase No Face / BELL from zach lieberman on Vimeo.
“The very first time that I sang my own song and played in front of people was at the Sidewalk Cafe at their open mike,” she continues. “That was a year after I moved to the city. And then after a couple of those, they granted me my own set, but then I had to come up with 40 minutes of music and then I slowly started playing around town. And as soon as I could, I switched from the piano to various synths…and it just kind of all snowballed from there.”

Bell has collaborated with a diverse range of artists including Dawn Upshaw, Phillip Glass, Das Racist and classical musicians. In 2011, she put out Diamonite, a solid collection of hypnotic and dazzling electronic-influenced pop. One of the songs that struck me is titled “Meaninglessness” just because it mentions the name of WNYC public radio host Soterious Johnson in the lyrics. “”Meaninglessness” is sort of about daily minutiae, which is pretty important because it creates the fabric of your life,” Bell explains. “I listen to NPR every morning and I always noticed his name and I find myself googling his name. It was just so singable in that phrase. So that’s always a really good moment in the set when I perform that song.”

Having worked with the Brooklyn-based band Chairlift, Bell is currently with Dirty Projectors where she she took over the keyboard duties from Angel Deradoorian. The two bands  share have Bryce Dessner as a friend in common. “It’s a very cool experience because I’ve been a fan of that band for many years,”Bell says of the Projectors. “It’s great to be playing and singing music that you really know, you know somebody’s else’s music. And it’s interesting because it’s wonderful music and so satisfying to perform that I didn’t have any part in creating. So in that way, it’s almost a return to the kind of playing that I was doing as a classical musician where you very intricately and rigorously study this music that you didn’t create and then in performance try to bring a freshness to it.”

Olga Bell – Buddy Holly from Noah Kalina on Vimeo.
Meanwhile, Bell is involved in another project as part of a duo with musician Tom Vek called nothankyou and working on a semi-classical piece in Russian that began for the Ecstatic Music Festival. And there is also the EP of new music that she mentioned earlier in our conversation.

“The EP is basically done,” she says. “It just needs to be mastered. So it could come out as early at the end of April around the time of the [Crossing Brooklyn Ferry] performance. I would like for it to come out sooner rather than later if for no other reason. I really believe in the freshness of the moment, especially in pop music. Tastes change and move on, and music that you make that you think is like [not good] in six months or a year, you may be in a totally different place sonically, lyrically, compositionally. It’s good to move fast, so ASAP!”