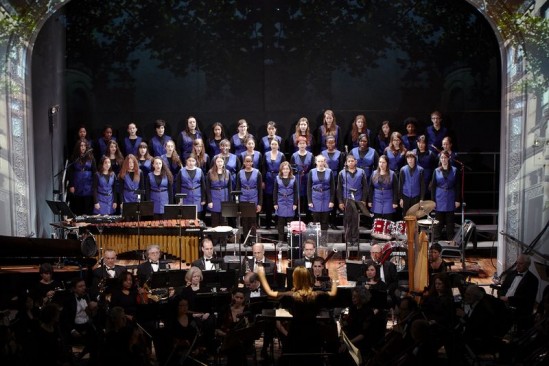 The Brooklyn Youth Chorus will appear on April 27 at Crossing Brooklyn Ferry, BAM, 6pm, $50, includes all festival performances and screenings on Saturday.

Of all the artists who performed at last year’s Crossing Brooklyn Ferry, it’s safe to say that the members of the Cobble Hill-based Brooklyn Youth Chorus were by far the youngest. The National’s Bryce Dessner and My Brightest Diamond’s Shara Worden joined the chorus on stage, which Dianne Berkun, the chorus’ founder and artistic director remembers fondly.

“For us, the experience was really wonderful,” Berkun tells me. “We are always working to open people’s minds and thinking about music sung by a chorus, and to bring in new audiences, particularly non-traditional choral audiences. We’re trying to change perceptions here. It’s not necessarily about singing ‘choral music,’ which comes along with a lot of preconceived ideas about what the music will be and how it will sound. It’s about a group of extremely well trained, talented young singers, singing a really wide range of new and interesting music, often by composers you wouldn’t associate with choral music at all.”

If you missed out on seeing the BYC at Crossing Brooklyn Ferry last year, you’re in luck–the chorus, which recently turned 20, will make a return visit to the festival’s second edition, joining an impressive lineup of artists headlined by the Roots, TV on the Radio, and Solange. The chorus’ repertoire for this upcoming performance will include new and recent works by Bryce Dessner, Arcade Fire’s Richard Reed Parry, Shara Worden, John King and Aleksandra Vrebalove.

For the BYC, the association with the Dessner brothers, who are the curators of the festival, came about through composer Nico Muhly, who asked Bryce to participate in the musical work Tell the Way–a collaboration between Muhly and the chorus that was performed at St. Ann’s Warehouse in 2011. “Bryce wrote his first choral piece for BYC entitled ‘Tour Eiffel,’” says Berkun. “This work, a piece of enormous beauty and complexity, fast became a signature piece–a tour de force of a kind, for the chorus. Bryce has described the introduction to working with BYC as a bit of peer pressure from Nico. Quoting Bryce, ‘Nico said, you have to work with these kids–it will change your life. And it did!’”

“It was one of the best creative experiences I have ever had,” Bryce told me last year about working with the chorus. “They are lovely kinds and really talented singers and their director, Dianne Berkun is amazing to work with.  They are also the type of creative organization based in Brooklyn that works with a huge range of composers (singing with the New York Philharmonic one night, and then working on Grizzly Bear’s album the next…etc….)  that we wanted to feature for the festival.”

As for what she hopes the audience at this year’s Crossing Brooklyn Ferry will come way from seeing and hearing the chorus, Berkun says “a new appreciation for the choral instrument and the range of what it can do–and sound like–and how it can lend itself to so many genres and styles of music–and really, how it can make you feel.” 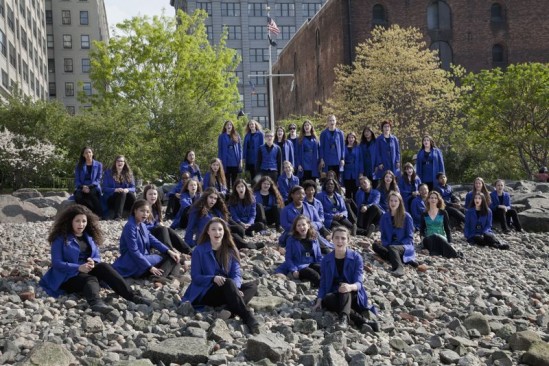 Founded in 1992, the Brooklyn Youth Chorus–membership through audition is open to girls in grades 2-11 and boys in grades 2-8–isn’t your average group of kids singing. The chorus has performed nationally and internationally, and at renowned venues including Lincoln Center and Madison Square Garden. Throughout the years, the chorus have worked with the likes of classical conductors like James Levine and Lorin Maazel; contemporary artists such as John Legend and Barbra Streisand and Grizzly Bear; and dance companies including Mark Morris and Wally Cordona.

Looking back at the history of the chorus, Berkun says it’s always shocking how the years go by and accumulate–she has former students whose children are old enough to join the BYC. “I think of the chorus’s history in chunks. Part I was just getting it organized and sustainable; part II was about trying to sound good, consistently, and getting the chorus out there; part III was about achieving success and recognition as an ensemble in NYC, performing with the top orchestras in the city/country/world as well as with some major recordings artists–from Elton John to Lou Reed. Part IV–now–is a whole new chapter as the chorus has begun to dig deeper into commissioning new works, collaborating with a range of interesting and exciting artists, and producing major works on our own, beginning with Tell the Way back in 2011.”

Berkun said that there have been too many noteworthy highlights in the chorus’ history to single out a specific one. One of the several that she cited was the chorus’ participation in John Adams’ work On the Transmigration of Souls–written after the 9/11 attacks–which premiered with the New York Philharmonic in 2002; the recording of the work would win a Grammy for best classical album. 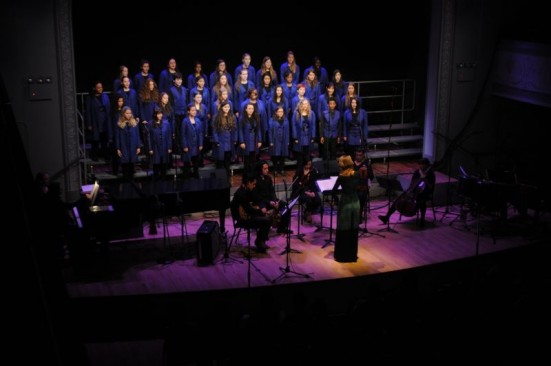 “The opportunity to study and perform that magnificent score was life changing for myself and the kids,” says Berkun, “one of whom said after the first reading, “I will never be the same having heard this piece.” Then at rehearsal, came singing alone on stage for Maestro Lorin Maazel and earning his first smile and nod of approval. It will be hard to ever top that!

“Next would probably be the presentation of Tell the Way as it represents a kind of coming of age or a coming out to the world as a chorus doing something really unique and different. And people came–to three sold out shows at St. Ann’s Warehouse – and they loved it. An advisor of ours said, after the opening night, ‘Now the chorus is cool!’”

In addition to their upcoming performance at Crossing Brooklyn Ferry, the BYC will also perform at its gala benefit with the Kronos Quartet. It will mark the second time the two have worked together–the first was in September of 2011 at the BAM Next Wave Festival in a program called Awakenings. “I think there was a real connection between the chorus and the quartet,” Berkun says, “a mutual admiration for both our individual artistic talents but also because of the spirit and energy with which we approach music.” Upcoming performances involving the BYC will include the Bang On a Can Marathon in June and Lincoln Center Out of Doors in July.

“I’m very proud of the chorus’s reputation because it is well earned, built steadily over time, and a representation of the high standards we hold for our organization, our staff and our singers,” says Berkun. “Education and training have always been the heart of BYC–no compromise on quality. The success with performances is a wonderful reflection of the work we’ve done.”