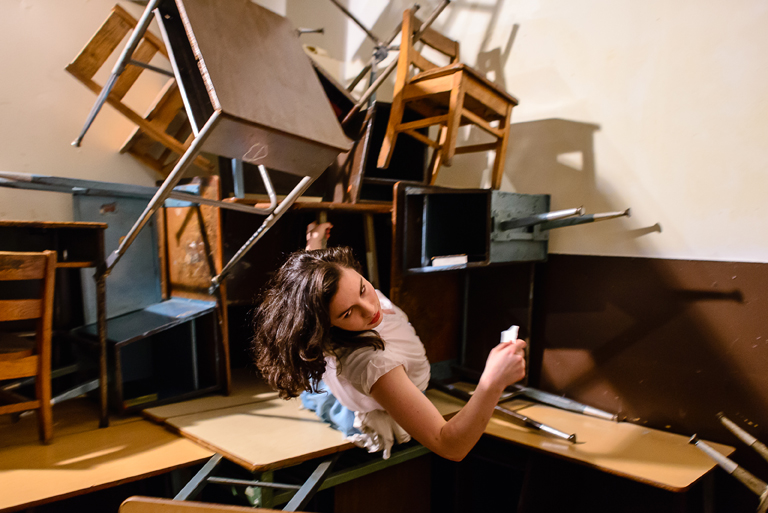 As a nurse dressed like an extra from The Handmaid’s Tale silently handed me a faded book with a secret compartment crudely cut out of its center pages, as a recording of The Walrus and the Carpenter hissed and crackled over an old gramophone:

“The time has come,” the Walrus said, “To talk of many thing: Of shoes—and ships— and sealing-wax—Of cabbages—and kings—And why the sea is boiling hot—And whether pigs have wings.”

I was then left alone in a tiny chamber filled with gold-framed Victorian paintings, including a detailed portrait of a walrus wearing a three-piece suit and a pocket watch, to contemplate the tiny vial of pills hidden in the book and Lewis Carroll’s frolicking prose. The sui generis writer–and his possibly pedophiliac fascination with Alice Liddell, the real life inspiration for Alice’s Adventures in Wonderland–is the subject of Then She Fell, an immersive theater and dance performance playing at the St. John Rectory on Maujer Street in Williamsburg from now through September. 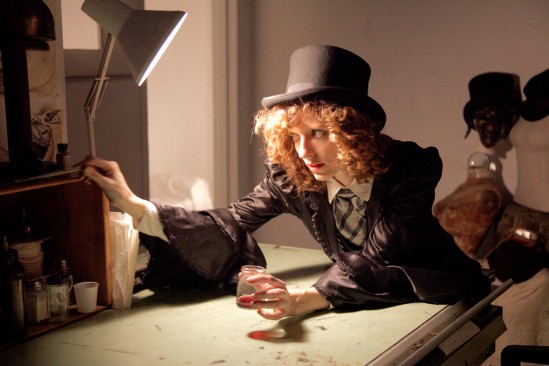 Anyone who donned a creepy white mask and stumbled through Sleep No More at some point over the past few years will not be fazed by the general concept behind Then She Fell. The set, which appears at times to be a turn-of-the-century mental hospital and at other times to be reconstructed from the deepest recesses of Carroll’s imagination, sprawls through the rooms of a three-story building. The actors and the audience wander about together as the non-linear plot unfolds over two hours.

You will be separated from whomever you arrived with, and that is a good thing. You also have to be prepared to blindly follow characters through a maze of hallways; drink the unidentified elixirs that they will hand to you; read mysterious scraps of paper found in locked boxes accessed with your own set of skeleton keys and generally enjoy the spectacle, which features lots of lithe dancers climbing and perching atop furniture. 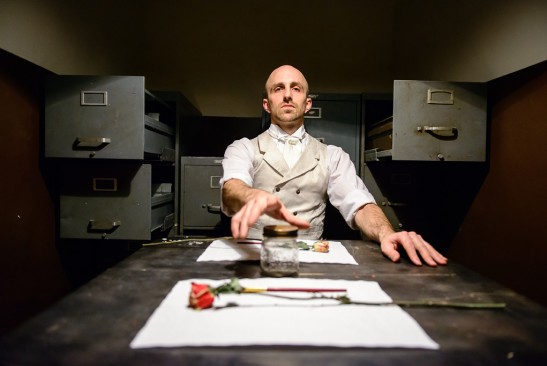 Despite actor Carlton Cyrus’ serious disposition in this shot, our writer found him quite agreeable as the White Rabbit. Photo: Darial Sneed

Each performance of Then She Fell is limited to just 15 audience members, which results in an intimate (and intense) experience. More often than not, I found myself completely alone with the characters, in interactive situations that brought varying degrees of self-consciousness–I had a lovely time with the White Rabbit when he led me to a room with walls that were covered with white roses painted red, but could feel myself blushing when Alice showed me her doll collection, asked me to brush her hair and peppered me with questions about when I first fell in love and what it felt like.

At one point, I was even led to a well-appointed study by Mr. Carroll himself and required to take dictation of a letter to Liddell–the young daughter of his boss and inspiration for his most famous literary character–explaining that he had to cut off contact with her. When I finished writing, he pushed in a bookshelf that turned out to be a secret door to a footbridge over a pond, waded into the water, placed the message in a tiny glass bottle and wistfully watched it float away.

Although tickets to Then She Fell run in the same $100 range as Sleep No More, SNM is a far grander, slicker production. At one point, I was amused to discover a “Property of the Great Neck Library” stamp on the weathered tome I was handed in the  Jabberwocky Room. All that said, I ultimately found Then She Fell to be an intriguing and transformative show.