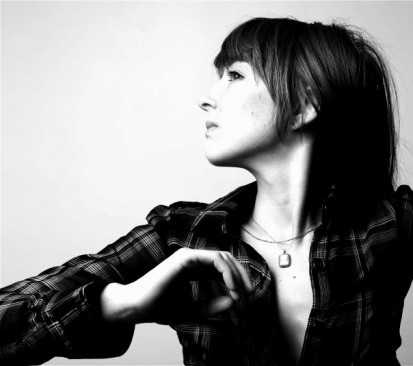 Faithful readers of Keep an Ear On already know that Simone Dinnerstein and Tift Merritt’s Night is one of my favorite albums so far this year. Now I present to you one of my favorite songs of 2013, El May‘s “Thrills,” and boy does this danceable song live up to its title.

First, a little primer: El May is the stage moniker for multi-instrumentalist and singer Lara Meyerratken, an Australian who is now based in Los Angeles. (Before moving to the West Coast, she used to live in Carroll Gardens, Boerum Hill and Williamsburg.) She may not be well known in the mainstream, but Lara has previously collaborated with the likes of Ben Lee, Nada Surf and Luna, and her music has been featured in film and TV–“Thrills,” in fact, was used on the ABC Family show Pretty Little Liars. On her 2010 self-titled debut, El May is literally a one-woman band, playing all the instruments on the record and delivering great indie pop songs in “Don’t You,” “Fire Freezer” and “Order in the Nothingness” that recall the best of the Beach Boys and Fleetwood Mac.

It’s been awhile since Lara released anything new, so I was pleasantly surprised when she emailed me a month ago with a Soundcloud link to “Thrills,” which is going to be on her upcoming album. I fell in love with this seductive track at first listen. It’s reminiscent of an old classic ’80s R&B track–the type of song you might have heard on 98.7 KISS-FM (R.I.P.), with its pulsating synth-bass groove, electronic drum beat and lush multi-tracked vocals.

There’s a definitely a sense of romantic longing throughout the song right off the bat with the line: “I’m not shy, but he’s so private.” As she explains it on her website: “Is it about having a crush on an old friend? And wondering, ‘Hey guy, who is it that you’re kissing? Maybe WE should be kissing’ Maybe it is.” I would tell the dude in question: “C’mon, don’t be an idiot. Are you that clueless? She likes you!”

Simply put, “Thrills” is a terrific track and on my list of faves of this year. And if that song is any indication, this upcoming second album by El May is gonna rock.