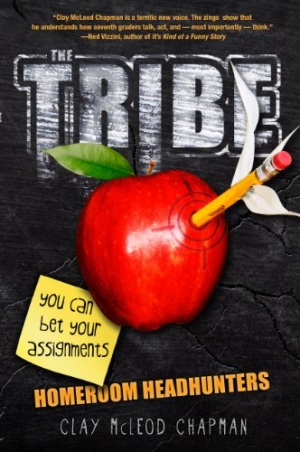 The Tribe: Homeroom Headhunters, the first in a three-novel series for young readers by Clay McLeod Chapman, a Ditmas Park-based novelist, playwright and all-around renaissance dude, came out today. We assigned Riley Manion, 10, and her nanny, Lauren Griffin, to read Chapman’s take on contemporary middle school life and report back. Riley, who says she likes to read all kinds of fiction, especially fantasy and mysteries, gave the book high marks for being the right kind of scary and for being “gross-funny.” She also noted that she’d like to see more character development in the next two books, and that she’s hoping for a big twist or a surprise ending in book number two. Here are their thoughts on The Tribe: Homeroom Headhunters.

Brooklyn Based: What’s this book about? 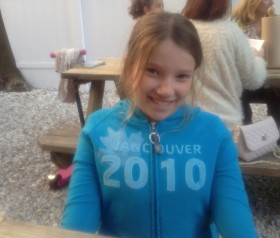 Riley says that “A Tale Dark and Grimm” is one of her favorite books.

Riley: It’s about this kid, and he keeps thinking he sees these faces appear in the ceiling…

R: Accidentally. [Meaningful look.] He has really bad asthma, so he’s about to die because of an asthma attack on his first day of school, and this inhaler comes down from the ceiling suddenly and he thinks that he has an angel at first, but then he keeps seeing faces in the window watching him. Later he figures out who they are and they’re actually The Tribe. They live in the boiler room and outside in the school once everyone’s gone, like behind the bleachers in the gym.

L: And in the ceiling. It’s kids who ran away from home, who were misfits. There’s this one bully named Riley Calahan…

R: Most of the reasons everyone ran away was because of Riley Calahan.

L: Is there a bully like that in your school?

R: Not really. But everyone can be a little bullyish sometimes. 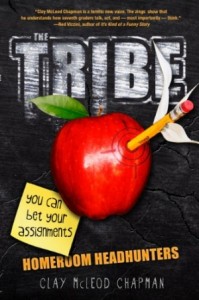 What did you think about having a bully with your name in the book?

So what was The Tribe doing, living in the school, hiding out?

R: The point of The Tribe was that they were all the outcasts, and then they lived by their own rules and then secretly bullied the bullies with like, strategy, not just by being mean.

L: So The Tribe wants Spencer to join them, and at first Spencer’s into it and then he realizes that they’re just as controlling and have as many rules as the school.

L: They brand him, it’s kind of terrifying.

R: He really didn’t like school because there were so many rules and there were all these mean teachers, and everyone didn’t like him, he was just an outcast, then when he saw The Tribe he was like, “Oh, there’s this whole group of outcasts, I could join them.” But then he realizes that the reason that he doesn’t like school, he’s an outcast, is because of all those rules and he realizes that those outcasts would be just the same in a different way.

Do you think that most kids who read this book will relate to Spencer?

R: I guess it depends on who you are. So if you’re a total goody-goody then no, you wouldn’t. But it’s still a really good book. I don’t like all the rules in school, and I don’t like mean teachers, but that’s not the whole story.

L: Would you want to live in the walls and the ceiling of the school?

R: It would be fun to try it out for a day, maybe. I’ve always wanted to spend the night at school, but I wouldn’t want to feast off of cafeteria food.