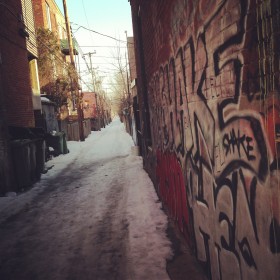 A few weeks back, I took a trip to Montréal. I was invited by Tourisme Montréal (through partnership with The New Yorker) to explore the city and get a sense for their cultural happenings. This was my first visit there since going with my family as a teenager in the 90s. I wasn’t expecting much, having been too busy being teen angsty to really absorb much of the city (but I remember having a fantastic time photographing the botanical gardens with my old manual Nikon). In short, I was blown away by what a cool city Montréal is. Sort of like a combo of Berlin and Paris, but much closer to home (only an hour flight!). There is clearly a cultural renaissance taking place now, with a backdrop of classical architecture and European flair.

The flight into Montréal was quick and I felt a bit like we’d landed in Europe because of all the French signs and the gorgeous, clean design of the airport. There was no wait for non-Canadians to enter — a bonus since I only needed a photo ID to enter the country the last time I was there — and I had an amusing encounter with a customs officer about Brooklyn and The New Yorker and the Montréal Tourism Board and what advertorial content means. 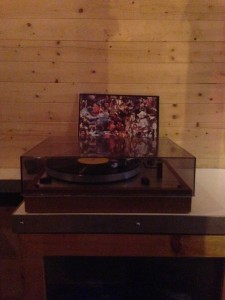 Sly and the Family Stone played during dinner at Hotel Herman

We were in town during the Under the Snow Festival (a smaller music festival by Montréal standards: Osheaga, POP Montréal, Mutek, and Jazz Fest all attract international talent) and wanted to venue hop a bit. We had dinner first at Hotel Herman, which I would categorize as New (North) American and typical of the hipper, new restaurants we went to. A fantastic French wine list, meat-heavy dishes with traditional French flavors and a modern twist (I could write a whole separate post about the puffed quinoa dish I had!). The wraparound bar gave us a great people-watching vantage point while we ate to a classic vinyl soundtrack. We walked over to Casa del Popolo and caught the end of the Dam Ships’ set and then across the street to Sala Rossa for The Loodies, a solid night of shoegaze. The music clubs reminded me a bit of venues I frequented in Boston a decade ago and a bit like a venue I’d been to in Amsterdam. It was only my first night in town but it definitely didn’t feel like a bland touristy experience. 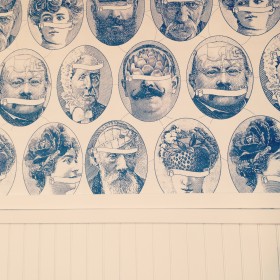 I couldn’t help but notice all the design touches throughout the city that made it feel original. From whimsical iconography in the public washrooms at SAT (more on that spot later) to the street sign designs unique to each district in the city, it seemed creativity is everywhere in Montréal. The small back room at Sala Rossa was covered to the ceiling with screen printed band posters (which we saw again at the Under the Snow record sale in a Mile End church basement). The chef at Lawrence helped design the whimsical custom wallpaper on their walls. Moment Factory designed the multimedia light installations in the lobby of 2-22 in the Quartier des Spectacles (a building you will likely end up at if you are trying to book tickets for a theater, music, or arts show while you are in town).

The city feels like a canvas for public art, sort of like Williamsburg or Berlin in the mid-to-early 2000s. We saw En Masse’s black-and-white murals all around the Mile End and even on a vintage Airstream trailer in the Quartier des Spectacles. One of the most random bits of street art was on a lone brick building near 2-22, the building itself was one of the few old ones remaining and the side was covered in bright murals.  I particularly loved the eyeball street lights in the Place des Arts, a little bit of Montréal flair in an otherwise typical public space. Perhaps the best example of public art in the city is the 6 kilometer passageway between Place des Arts and Complexe Les Ailes. Art Souterrain presents hundreds of contemporary artists’ installations in a walkable underground gallery. We lucked out with the weather, but this is a perfect activity for a rainy or cold day. 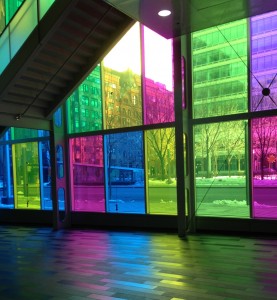 The underground art passageway leads through tunnels between buildings, to Metro stations, and through building lobbies

Keep an eye out here for part two of my weekend jaunt to Montréal: a twist on a diner brunch, an alt-weekly launch party, the coolest art bookstore, a grown-up circus, and my first Montréal bagel.

You can find information about festivals and events via Tourisme Montréal and book tickets for shows in person at the 2-22 arts center in Quartier des Spactacles at 2-22 Rue Sainte-Catherine East or via the 2-22 website. This post is sponsored in partnership with The New Yorker and Tourisme Montréal. Thanks for showing me around, @Montreal and @NewYorkerPromo!