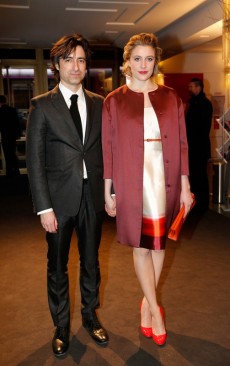 The couple that writes together, stays together: Noah Baumbach and Greta Gerwig

Noah Baumbach and Greta Gerwig were on hand to discuss Frances Ha, the film they wrote together (and Baumbach directed) after an advance screening Tuesday evening at BAM, along with co-star Mickey Sumner.

The movie, which opens today, concerns a character in her twenties, or more specifically, the start of her late twenties. Twenty-seven, the age of Greta Gerwig’s Frances in the movie, is still young enough to fall down repeatedly, as Frances does both literally and figuratively throughout the movie, but it’s also old enough to feel one should be past such obvious missteps. At 27, there’s so much to figure out that it’s hardly the beginning of the end, but it might be the end of the beginning.

For creative types like Frances, an aspiring modern dancer, coming to New York is a given. So is living with her best friend from college, Sophie (Sumner). Frances’s line is that the two of them are like the same person, with different hair, and in a story that rejects sex—at one point, Frances makes a game show buzzer noise when a date tries to touch her—theirs is the central relationship of the movie. But when modern dance fails to pay her rent and Sophie moves out, Frances struggles to figure out who she is in the absence of these two thus far defining bullet points.  Trying on her new rudderless identity at a dinner party, Frances answers the question of what she does by saying, “It’s kind of hard to explain.” Because it’s complicated? “Because I don’t really do it.” This kind of honesty tends to makes people uncomfortable, and hard to sit next to, but it’s also exciting to watch Gerwig put it out there. 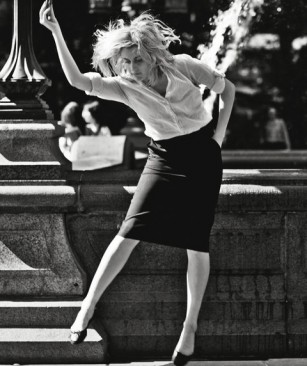 The movie is episodic, and stints in a new apartment, at her parents’ house, in Paris, and at a summer camp refuse to provide the Aha! moments that they might bring Frances in another movie. Baumbach shot the film in black and white, which makes the movie feel timeless even as Frances taps out a text, and universal, even though most of us don’t jeté-run across city streets.

When asked about her dance background, Gerwig said that she studied modern dance in college, after it became clear to her that she didn’t have the right body type to pursue ballet. She explained that a major part of modern dance is release technique and a dancer’s connection with the ground: “You become good at falling.” Even though she probably has repeated that sound byte several times throughout her appearances around this movie, it remains a good metaphor for Frances, and for one’s twenties.