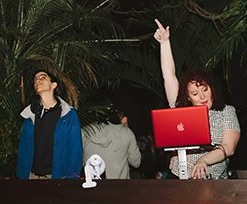 Tonight the duo of Russ Marshalek and Sophie Weiner–who cite numerous influences, including Enya and Agent Dale Cooper and who have been known to devote entire DJ sets to David Lynch soundtracks–are throwing the year’s last Robyn Party (dance raves for superfans of the Swedish pop singer) at The Bell House. Things could get weird, and as Marshalek explains, the only thing to expect from an SDR event is the unexpected.

BB: How did the band branch off from your DJ gig at erstwhile Greenpoint bar Veronica Peoples Club?

SDR: Silent Drape Runners began as a way to fulfill a drunken promise to a VPC bartender, and everything sort of formed out of that. It was never intended to be more than a one shot, but so it written, so mote it be etc.

BB: Where in Brooklyn do you live?

SDR: I live in Greenpoint. Sophie lives in Bushwick.

BB: How did you wind up in New York?

SDR: I moved here four years ago when my life in Atlanta kinda fell apart. Sophie moved here about two and a half or three years ago to take a social media internship, coincidentally with me. That’s how we met.

BB: Describe your music in one word.

BB: If you, separate or as a unit, could be a ’90s alternative-music goddess, who would you be?

SDR: Alanis Morissette circa Jagged Little Pill. I know everyone expects me to say Tori Amos, but how can you actually BE THEE GODDESS???

BB: Tell me a bit about your Europe tour during the past couple of weeks. How did it come about and where are you headed—both literally and metaphorically?

SDR: We saw The Knife. It was incredibly inspirational and absolutely stunning. We also got to meet a lot of great people, from the Aural Sects record label. And we spent a great deal of time detained by customs, but that’s a story for another time, just in case they’re still watching.

BB: What gigs are you playing during the late spring and summer? Let’s get started with your gig at The Bell House.

SDR: We’re doing our final Robyn party of the year on the 24th at The Bell House, combining our joint loves of pop music and weird electronic, so celebrating both Robyn and The Knife. There may be choreographed dancing. Otherwise, we’re really focusing on our weekly party at The DL, at Delancey and Ludlow on the Lower East Side. We’ve been really fortunate to get to curate Tuesday nights there. It’s a gorgeous space, and we’ve gotten to work with a lot of really amazingly talented artists. This coming week, May 28, is actually my birthday party. I’ve always wanted a gothic, pizza-party birthday, so…I’m having one!