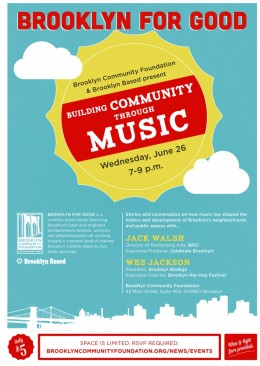 If you’ve ever wondered how Celebrate Brooklyn!—now in its 35th year—got its start in Prospect Park, or who brings hip-hop’s biggest names to perform in DUMBO each summer, you’re in luck.

For this month’s installment of our new event series with the Brooklyn Community Foundation, Brooklyn For Good, we’re presenting the producers behind two of Brooklyn’s most influential summer music festivals: Jack Walsh of Celebrate Brooklyn! and Wes Jackson of the Brooklyn Hip-Hop Festival.

On Wednesday, June 26th at the Brooklyn Community Foundation, they’ll share the stories behind their signature events and discuss how music has helped shape Brooklyn’s neighborhoods and public spaces over the decades, in a discussion moderated by Mike Conklin, Editor-in-Chief of the L Magazine and Brooklyn Magazine.

Tickets are just $5 and include wine and light fare. Register now, space is limited!