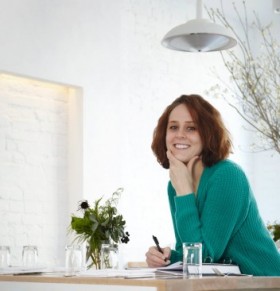 Holly Howard runs Ask Holly How, a small business consulting company based out of Williamsburg, Brooklyn that works with a wide variety of businesses from restaurants to retail to art studios and pretty much everything in between. Her clients report increased income and profit, decreased expenses and a significantly better quality of life. Holly heads up the Small Business Book Club at McNally Jackson Books.

Want valuable insight into how to grow your business?  Holly hosts FREE 30 minute strategy sessions at The Yard in Williamsburg.  Email her to set up a time hhoward@askhollyhow.com or to ask a question for the next Ask Holly How.

I’m in a bind.  I run a small architecture firm and recently one of my head designers told me he’s moving across the country.  He has asked that he stay on board even while he relocates, but his attitude has become quite sour.  I’m leery about my own ability to hire and train a new designer to replace him.  It would be possible for him to do his job once he’s relocated because all of his responsibilities are online, yet I’m worried that once he relocates, he won’t be as invested and I won’t be able to monitor his work as closely.

I’ve considered bringing on another part-time designer to work with him in this transition, but I’m worried his sour attitude will rub off on new staff.  I’m pretty sure I need to let him go, I’m just really afraid of the entire unknown ahead of me.  What is the best way to move forward with this situation?

Sour attitudes are the worst!  Consider a few things first before you make a decision.

First, as the leader of the business, it’s your responsibility to be good with change.  I know that’s something you probably didn’t really consider when you started your own business,but the best leaders are masters at navigating change.  It sounds like your studio is in a big transitional period; and the better you become at leading change, the more successful the transition will be.  You must be willing to take calculated risks, navigate the unknown, be flexible and adapt to the situation as it unfolds.  The more you resist this change; the less likely will be your chance of a achieving a successful change.

Second, be honest with yourself about the value that this current employee brings to the business.  Yes, he has the skill set you need, but a sour attitude can be incredibly toxic, especially in a small and intimate environment like yours.  Don’t underestimate the effect this could have on new staff or on the projects you’re pursuing.  You may be causing more harm than good by keeping him on board.

Finally, if the idea of hiring and training a new designer feels burdensome, then take the time now to get clear on your needs.  Make sure you write down the roles and responsibilities of this new hire.  Create a list of goals and deadlines for the training period so that it doesn’t get murky.  And most importantly, keep the lines of communication open and encourage feedback from the new hire.

These are three simple steps you can take to ease the transition and bring someone new on board.  Though it seems like a burden to hire and train, it may be exactly the change you need in order to grow.  Remember to think about what’s best for the long term and not just about what’s comfortable in the short term.  This will help you make the decision that’s best for both you and your business.