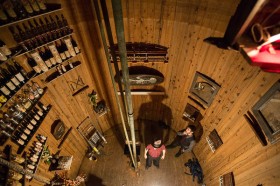 The minds behind the Night Heron Speakeasy bring their expertise to ground level in a weekly discussion series. Photo: Atlas Obscura

If the illicit water tower speakeasy Night Heron closed before you even knew it opened its trapdoor, you can still get in on some covert action from Night Heron proprietor N.D. Austin and fellow “chief instigator” Ida Benedetto.

Yesterday marked the first of Austin and Benedetto’s four-part discussion series, Wanderlust School for Transgressive Placemaking, presented by Atlas Obscura and held every Tuesday night in June at Acme Studio in Williamsburg. The series is basically a guide to exploring and creating hidden pockets of the world, from long-closed railroad stations to water tower bars. Austin and Benedetto moderated “Broken Legs, Surveillance Cameras and Black Mold: Safety and Security Off the Grid,” where experts in high-risk experiences revealed how to assemble a trustworthy team of collaborators, manage controlled chaos (like at Burning Man’s bare-knuckle battle cage, Thunderdome) and assemble a top-notch first aid kit (just in case).

“People always want to join us in whatever we’re doing but there’s a limited number of people you can safely do this stuff with, so we really want to encourage other people to do this,” Austin said about the inspiration for the series. But education goes both ways. “There are a good number of people who are doing transgressive things somewhere on the far side of the law, and we want to learn from those people,” he said.

The subject matter–insider tricks on accessing neglected spaces, exposing a city’s previously unseen gems and the legal repercussions that can arise–is for a decidedly niche audience of the covert and daring. But even for those who are less audacious, an evening with Austin, Benedetto and their fellow conspirators offers momentary admission into an exclusive (and elusive) New York society.

“The kind of risk people need to take on, not everyone is available for that,” Benedetto said. “But we don’t want to exclude them from being inspired and interested in this. This is a very accessible way to get in touch with these topics.”

Tickets are $12 and can be purchased in advance only.

Tip: Arrive early to take full advantage of the cash bar, which offers bargains rarely seen in the borough: $3 Rolling Rock cans, $4 plastic cups of wine and an absinthe fix for $5.

June 11–Go Directly to Jail: Trespassing and the Law

June 18–Getting in is the Easy Part: Site-Specific Experience Design

June 25–For the Little Old Lady in Japan: Documentation and Legacy