If you’re one of the 5.5 million people who ride the rails every day, you’re no stranger to crowded train cars, steamy subway platforms and service delays that make you late to work (or maybe you just slept in, but we won’t tell). When most of us talk about the subway, these experiences are what we recall, not the factors that keep our fellow travelers and us safe. 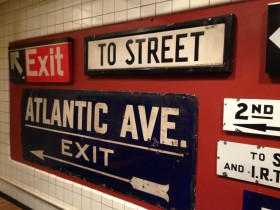 If you see something on the subway, say something. Visit the New York Transit Museum, and learn something, too. Photo: BB

“It’s a very porous and open system,” Nugent said to an intimate crowd at the New York Transit Museum in Brooklyn Heights. But the age of the system brings certain challenges.

“It’s a tremendous system, and when it was built back in the day they didn’t have terrorism in mind,” Nugent continued. “The hardest thing to do is retrofit anything. It’s easier when you build something new to make it to your specifications.”

But adaptation is necessary to keep the subway safe, and Nugent discussed the various efforts that the NYPD and the MTA make to prevent crime, including random bag checks for explosives, planting plainclothes officers on trains and in stations to catch pickpockets or disguising officers are station sanitation workers.

The most creative tactic Nugent highlighted was designed to prevent the most frequent subway crime, device theft, and involved a visit to the MTA’s lost property unit.

“I picked 50 iPhone 4s,” he said about a recent trip to the lost and found, where, after six months unclaimed items are removed. “I bring them to the transit bureau, give them to the police department and what they do is they do decoy operations. They sit on the train and they’re going to make believe they’re asleep and they’re going to sit with the phone in their hand. Why? So they’re the victims and you’re not.”

But despite the rise in device theft, Nugent emphasized that subway safety has only improved.

Look for the next Problem Solvers event with Ben Kabak in early fall. Check the New York Transit Museum’s programs page for up-to-date information on all their programming.