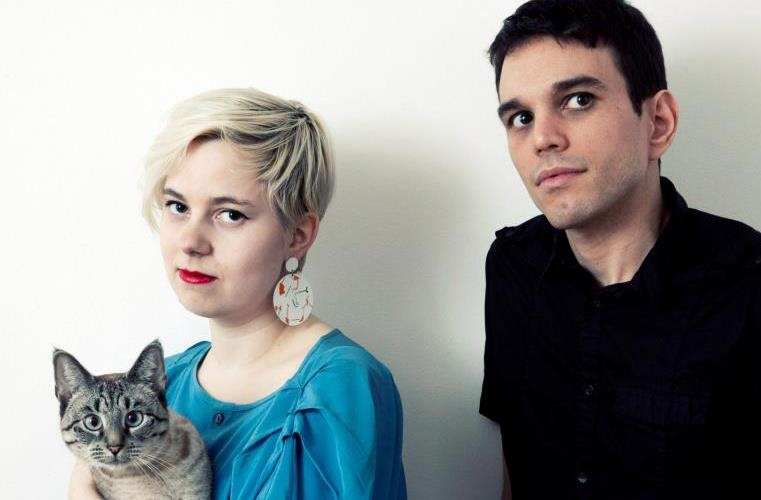 It feels like we were just getting to know Silent Drape Runners, but alas our love affair with the lynchpop duo was to be short lived. Today the twosome announced that they will stop making sweet, synthesized music later this summer, playing one final live performance at The Bell House on Aug. 1.

Russ Marshalek and Sophie Weiner cited the ambiguous catchall of personal and creative differences as the reason for their split.

“When we made this call, we knew we wanted to do a final Twin Peaks performance, because it’s why we originally formed, and it’s become something we’re both very proud of,” Marshalek says. “We intend on giving gifts of thanks via the small amount of unreleased material we have over the coming weeks, because it really should be heard.”

SDR takes its name from Nadine Hurley’s need for noiseless window treatments on the TV drama series. The duo initially formed in 2011 when Marshalek was looking for a singer to help him out at his weekly gig DJing at Veronica People’s Club in Greenpoint, after he decided he wanted to devote the nights to resoundtracking episodes from the David Lynch hit.

Finding the collaboration fruitful, the two moved on to regular gigs at The DL on the Lower East Side (which they’ll continue to co-host) and quickly found a cult following for their dance parties devoted to the Swedish synthpop princess Robyn and her electropop compatriots.

Marshalek and Weiner have already moved on: Marshalek has formed a solo project with a dark, smeary Lynchian sound called a place both wonderful and strange,which was inspired by a Dale Cooper quote Marshalek got tattooed on his right arm. Plans for a live performance are in the works–he’ll open for le sphinx at Bowery Electric on July 11.

David Lynch will get his dues in this new project, too, but Marshalek, who writes about music for outposts like Flavorpill and Adhoc, intends to incorporate movement, visuals and lighting in the live performances for a place…, and says he’s “also pretty much constantly going to be listening to The National for the rest of 2013.”

For her part, Weiner plans to continue DJing under the name “DJ Bottle Rockets” and has picked up a bi-weekly gig on Thursday nights at Alaska in Bushwick. She has a solo ukulele project in the works and is looking forward to creating and editing a faux-women’s (maga)zine called Real Housewives of Bushwick.

“We’re really proud of what we were able to accomplish together, and look forward to the future separately,” Marshalek. “Additionally, it should be noted that the question ‘are they a joke or for real?’ was never actually answered.”