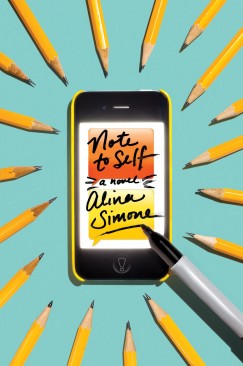 Alina Simone’s new novel, Note to Self, has just been published by Faber and Faber. She will appear at WORD, 126 Franklin St., Greenpoint, this Wednesday at 7 pm, as part of Largehearted Lit’s Debut Fiction Night.

In Alina Simone‘s new novel, Note to Self, the main character, Anna Krestler, is a person most of us could probably identify with: a single, unemployed thirty-something who constantly procrastinates on the internet. During one of her visits online  Anna discovers the work of filmmaker Paul Gilman, who specializes in the “Nowist” genre, which can be best described as some sort of underground, experimental DIY cinema. Seeing a possible future in filmmaking, Anna buys herself an expensive camera from J&R and through Craigslist hooks up with an ambitious and eccentric Nowist filmmaker named Taj.
As an apprentice Taj and his somewhat motley film crew, Anna goes through some unusual adventures at film shoots. It all gradually leads to an unexpected climax and a moment of self-realization for our heroine toward the novel’s end.

More than just a hilarious story about the Bay Ridge-based Anna’s experiences in the narcissistic world of Nowist filmmaking (a genre invented by the author, though it may as well be real), Note to Self is a cynical and melancholic commentary on a distracted, internet-dependent society. 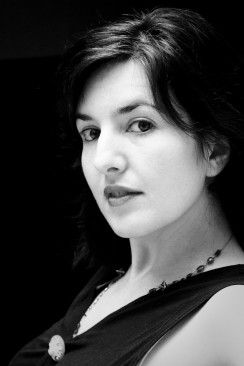 Note to Self is Simone’s first novel and a follow-up to You Must Go And Win, her 2010 collection of essays. She started out recording indie folk rock music and her last record was called Make Your Own Danger. She has also contributed pieces to The New York Times and is currently working on a biography about Madonna. I recently spoke to Simone about her new book, her own relationship to the Internet, and her transition from musician to writer.

How did the idea of the book originate?

I know [the writer] Tao Lin a little and I saw his book Shoplifting from American Apparel. I started my book around the time that book came out and I just loved the title of that book. It just conjures exactly what [my] book is about–this sort of ennui, slacker attitude towards morality as it characterizes a certain twenty-something hipster. I just saw the title and I was like, “Oh, I want to write a thirty-something version of that.”

That was my motivation because I felt this sort of feeling of being adrift and internet-addicted is discussed a lot in terms of twenty-somethings and Girls and Lena Dunham, but not so much of in terms of thirty-somethings, but all my friends are just like that. It’s a different generation, there are differences, there are different expectations. I thought it would be really funny to look at an older generation’s relationship with the Internet and Craigslist, just this weird world of online-ness.

Do you consider yourself online-addicted at times?

I go through phases. To be honest, I didn’t have a smartphone until this year, so I was kind of a freak. It felt like society was battering me. My friends would be angry with me. They literally would be like, “When are you going to get an iPhone? What’s wrong with you? I want to send you all this crap all the time.” I finally relented…and I got an Android. I’m not like Anna and I do put the kibosh on the internet for days at a time–for three days I’m not gonna check email.

I do have this love-hate relationship with it. I don’t want to spend a lot of time online. I feel like it makes me unhappy. I feel like I have to maintain this consciousness that it makes me happier to sit in a chair and read a physical book than to read 12 really tiny articles online–that it just makes me feel better. It is hard to resist to just keep clicking on one little tiny interesting thing after another than not kind of do the harder work of digging into a narrative with an uncertain payoff.

One of the telling episodes in the book is when, as part of her initiation into filmmaking, Anna, wearing a disguise, participates in a video chat. And then at the request of a stranger during the chat, she takes off her shirt and is topless. I felt like she was crossing a slippery slope there.

That was the beginning where you can just see, like you are alone with the computer, you think you’re alone, you think no one’s watching you. That’s where the book becomes sort of a cautionary or morality tale because you’re never alone. In this world, it becomes hard to just to be alone and think that everything they’re doing isn’t leaving a record and leaving evidence of some sort. That’s sort of the drawback of all this technology, it leaves a trail. So it’s the beginning of the trail.

Clearly the book is funny, but there’s also a dark and melancholic undercurrent, too.

I really hope that it’s funny and entertaining. I didn’t want it to be this huge, bitter downer. As someone who consumes a lot of pop culture, there is an incentive to wrap things up in a pretty bow or give people the ending they want…but ultimately art is a failure if you follow anyone else’s impulses or direction or tastes other than your own. The hardest part was to write the end and to remain really, really true to the character and what I really think that would happen to her up until the very end. It had a different ending before and I actually scotched the whole ending—it had a happier schmaltzier ending and no one liked it who I showed it to. And then I was like, “Oh, I just have to be my bitter little self” (laughs) to the very last page.

By the way, thank you for giving props to the Bay Ridge and South Brooklyn areas.

That whole area of Sunset Park and Bay Ridge I feel like is kind of under-served. I lived at the time in the neighborhood that literally had no name. I guess some people kind of call it Greenwood Heights. I just lived in this industrial area near 19th and 4th. People kept telling me I lived in Sunset Park. So I knew that territory and I wanted to–it’s cool, It’s also a little forlorn. I felt it was the right place for her to live, far down on the R.

You have been prolific as a writer in the last couple of years. As far as music is concerned, can we expect something new following your last album, Make Your Own Danger?

I don’t think so. I can’t figure out how to do it. It’s not like a pure matter of finances. It just feels like so much effort for an unclear reward, at least for me. I feel like if I made another record…if I wanted to produce a physical record like a vinyl or a CD, with marketing, it’s like $8,000- $10,000—and that’s like really, really bare-bones recording if you want to record in a professional studio. I have a toddler now and I’m not going to tour. I’m not looking to launch myself into the pop stratosphere and that’s not gonna happen. I’m happy with the music I made.

It just became more existential, like “Why am I doing this?” If I want to write a beautiful song, I could just write it here in my home. I can record it on a little tape recorder [so] my friends and family can enjoy it. It’s something that I really grappled with. If there was some significant help available, then I would do it. But doing everything all on my own, I don’t have the strength for it anymore. I did it last time, it was a lot of work.

Nevertheless, you seem to have really found your niche as a writer.

For me it’s a really natural transition. Writing is free–all I need is a pen and paper or a computer, and then I can just make some art, and it’s quiet and portable. I’m really, really lucky. It’s not that I even found something else that I like to do, but someone else randomly decided that I would like to do this and be good enough at it (laughs). It’s a very weird fairy tale ending.