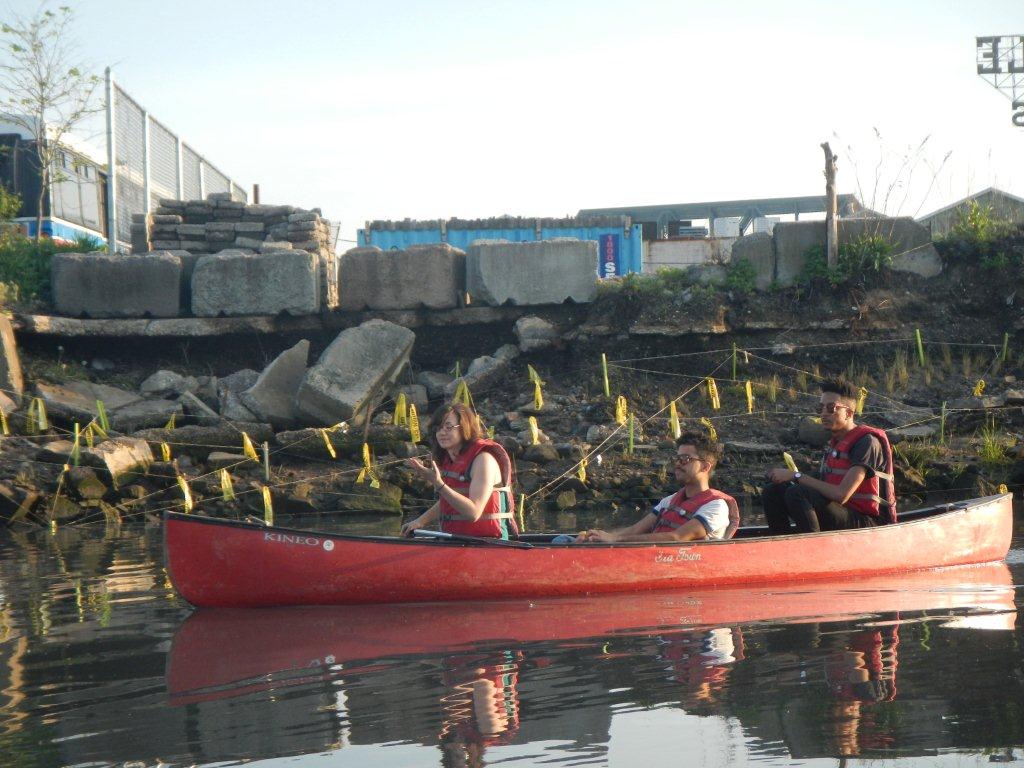 Have you ever thought it would be nice to stand on the banks of the Thames and watch crew teams from Oxford and Cambridge race in a time-honored and resplendent athletic competition? Well, Brooklyn now has a race that is pretty much the opposite of that. This Saturday, June 15, marks a historic event: the first-ever boat race and awards banquet to take place entirely on an EPA-sanctioned Superfund site. Yes, folks, the Gowanus Canal, in all its gonorrhea-infested glory, will serve as the setting for a 2.5-mile paddling race dubbed the Gowanus Challenge.

It’s not exactly Venice, but the Gowanus Canal will host the very first boat race on a Superfund site this Saturday. Photo: Gowanus Dredgers

Back in early spring, the Gowanus Dredgers and the Red Hook Boaters, two boating-enthusiast groups committed to remediating polluted local waterways, issued a challenge to all boathouses in New York City and beyond to compete in one of two classes: canoes or everything else. The only rule is that none of the vessels can be outfitted with a motor or a sail. When I spoke with Owen Foote, one of the Dredgers’ founding members, even he seemed surprised at the enthusiastic response that ensued. At press time, 26 teams had registered to participate, including some stand-up paddleboarders whose official moniker is the Red Hook Zombies, although Foote told me they refer to themselves as “the Walking Dead.”

Perhaps now is a good time to remind you that, within the past six years, the canal has killed both a baby whale and a dolphin who had the misfortune of ending up in its fetid waters.

Who are these crazy paddling fiends with their cavalier attitudes about exposure to lethal industrial waste? Some local boat groups, like Brooklyn Bridge Park Boathouse and Astoria Boaters, are apparently incapable of turning down a dare, although Greenpoint’s North Brooklyn Boaters and Canarsie’s Sebago Canoe Club have so far managed to sidestep the invitation. The big news, Foote told me, is that the race is now international, thanks to the addition of Canada’s La Mer de Brooklyn. Other entrants of note include Greased Lightning, which leads the fundraising effort with $820; a team of Upper East Side orthopedists called Crazy Bones; the SuperFun Sewer Rats, which boasts New York City Councilman Brad Lander as a member; and teams that are clearly angling to win the potential coolest team name prize, like Carnival Cruise Lines and Toxic Avengers.

A mystery prize will go to the first-place finisher, while the runner-up will receive $400 in gift certificates to Brooklyn Crab and Dinosaur BBQ. If you want to be part of the fun but don’t have a personal cache of Cipro, there are benefits for spectators too. In addition to getting to cheer on your favorite team, you can enter a raffle for prizes like a cordless drill from Mazzone’s Hardware (because you have to be “screwy” to enter a race like this, Foote deadpanned). At the awards banquet after the race, beer and juice boxes will be served and Giardini’s and House of Pizza & Calzone will compete for the title of Best Pizza in Gowanus. 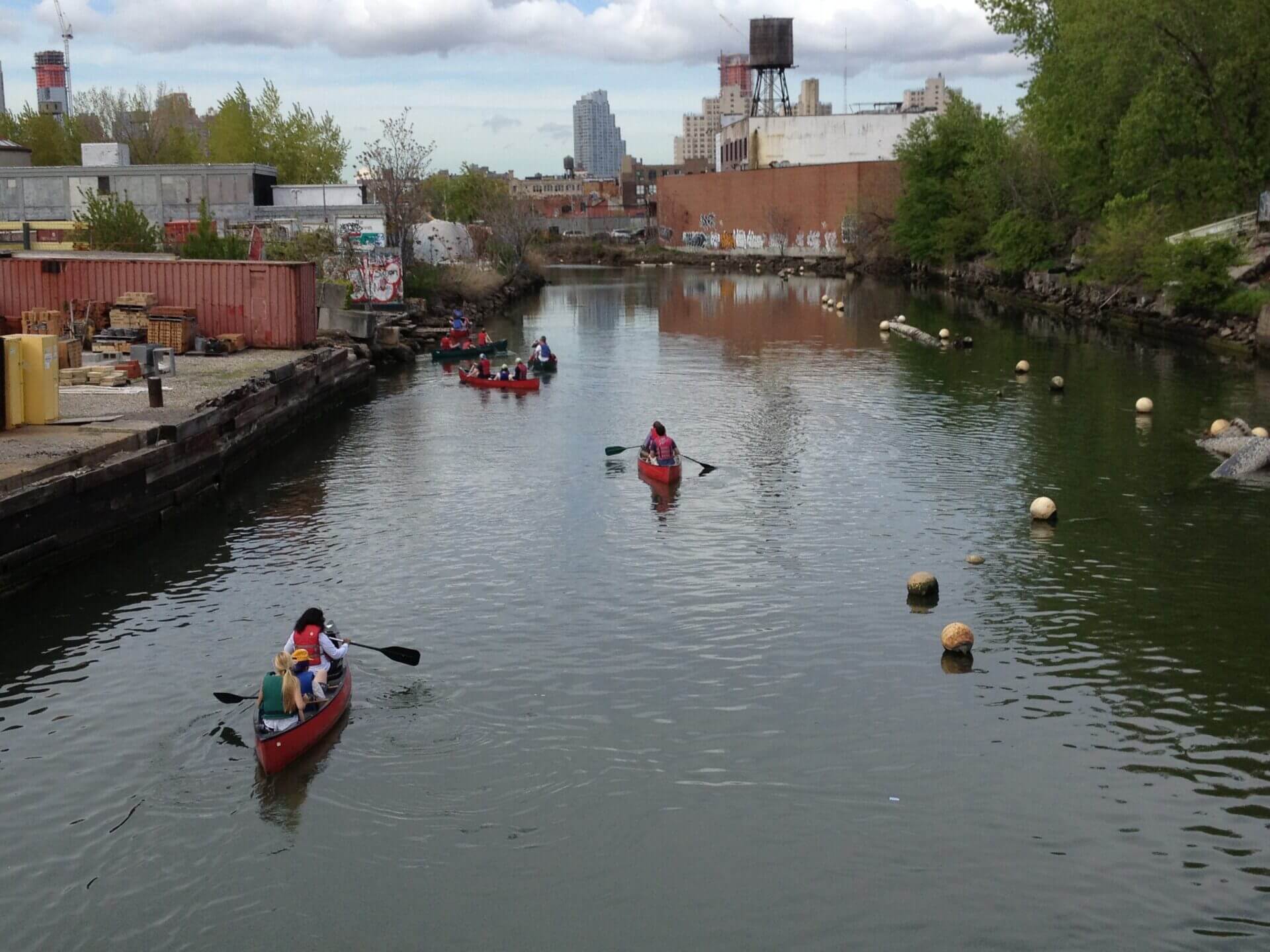 Competitors in the first-ever Gowanus Challenge will race to the mouth of the canal and back for a chance to win a “priceless” mystery prize. Photo: Gowanus Dredgers

The race begins at the Dredgers’ 2nd Street Boathouse at 11am, and competitors will sprint up to 9th Street, turn and head back to the finish line where they started. The platform of the Smith-and-9th-Street station and the bridges at 9th and 3rd streets are recommended spots for optimal viewing.

According to Foote, the Gowanus Challenge will become an annual event. “I figure we have about 100 people participating this year,” he says, “but we want 100 canoe teams next year.”

Although it’s fun to joke about how gnarly the Gowanus Canal is (and it’s sort of a necessity when you live as close to it as I do), the Dredgers’ mission to reconnect the waterway with its surrounding community so that one day it will be clean enough to not be a punch line is a very important one. It’s certainly worth a trip to support some brave (or foolhardy) souls as they embark on an unprecedented adventure this Saturday.

If you’re feeling up to the challenge, you can still register to participate in Saturdays race by emailing gdredgers@gmail.com.