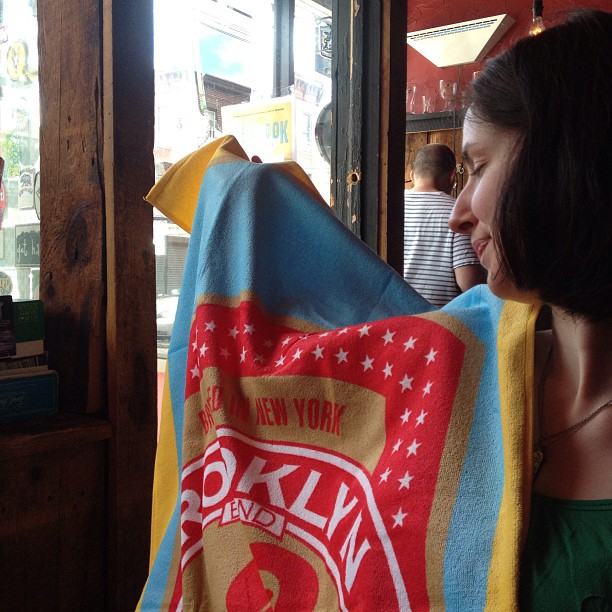 The @brooklynbrewery gang kicking off the Immersion

@allisonklein’s report of her Local 1 beer brunch at Kevin’s: “My Red Hook Immersion brunch had a face.” #breakfastofchampions

@nalesandales with @brooklynbrewery for a beer brunch at The Good Fork

Jon Hussey (@GWjonlhussey) got his crew together for Red Hook Dare #3: “Find 7 or more friends and spell Red Hook together using just your bodies.”

@vsoslyv put a bird on it

drinking while Instagramming, or as @mel112587 put it, “drinking on the mean streets haha”

This was @JulianPill’s sixth! immersion, and he completed dare #4, “Share a Red Hook treat with a stranger,” with Maureen at Rocky Sullivan’s

@willoliversmith’s take on the Ikea Dare: “My wife is more mad she wasn’t invited than about the adultery.”

One of three awesome Brooklyn Brewery beach towels we gave away. The winner of this one was the first to yell “Red Hook Forever” at Rocky Sullivan’s. (We swear we hung out in more places than this)

Last Saturday’s Total Red Hook Immersion with Brooklyn Brewery was yet another fine day of free-flowing Brooklyn brews in one of our favorite waterfront neighborhoods. We hit up many of the same spots as last year, but added a few new attractions. The Total Red Hook Dare–a contest involving challenges like “Stage a Marital Spat in at Ikea”–gave some of our Immersion goers an incentive to stage elaborate, intoxicated Instagram scenes, and live music from Wyatt at our after party at Jalopy was the perfect end to our day. 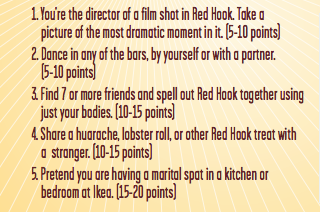 And the winners of our Red Hook Dare are:
-Will Oliver Smith captured each dare with verve, and gets the Cheese Survival Kit from Brooklyn Slate Co.
-Julian Pill, a close runner up who also also completed each dare, wins the private blind tasting and tour at Red Hook Winery.
-Jon Hussey got just one (#2), but it was a really good one and wins the signed copy of the latest Baked cookbook, Baked Elements.
-Kelli Mears produced some fine Vines as part of the dares. She wins two passes to the Electronic Voices class at Pioneer Works.
–Vanessa (@vsoslyv) got into the game, and gets a tote from Brooklyn Based.

Come play (and drink and brunch) with us in Long Island City for the next Immersion on July 13!