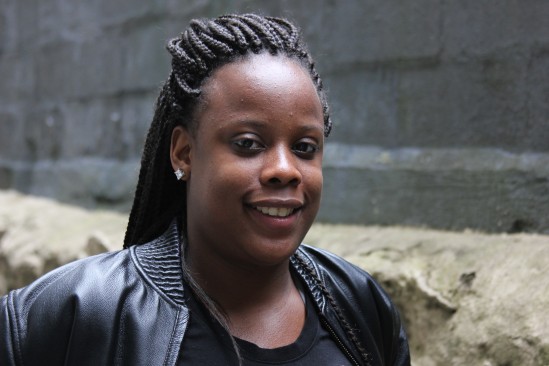 Denetria Council, a domestic violence survivor, was beaten with an electrical cord by her ex-boyfriend. Photo: Emily Field

When she finished speaking in public for the first time about her experience with an abusive boyfriend, Denetria Council was in tears. But she was also smiling.

“I didn’t think I could get through it without blubbering, I was so scared,” she said last month in a church basement in Bedford-Stuyvesant, where she addressed a small crowd of Brooklyn women at a community health fair.

Council’s story is an extreme example of the pervasive domestic violence problem in Bushwick and in Brooklyn as a whole. Five years ago, Council’s then-boyfriend, Jason Page, kept her imprisoned in their Bushwick apartment for 17 days. He tied her to a crib and whipped her with an extension cord until she bled. Her back and her arms still bear the scars. He was convicted in 2009 of kidnapping and is currently serving a 25-year prison sentence.

Brooklyn has the highest rate of reported domestic violence of all the city’s boroughs, New York State Department of Criminal Justice Services statistics show. Last year, Brooklyn tied the Bronx for the most domestic violence-related homicides, 22 out of a total of 69 citywide.

And in Bushwick, a neighborhood grappling with high levels of poverty and crime despite its artsy, gentrified image, the rates are especially high. The number of police responses to domestic violence incidents in Bushwick was 22 percent higher than in the borough as a whole.

“I think it is a community that is faced with a lot of stress and pressure,” said Abbie Tuller, executive director of the North Brooklyn Coalition Against Family Violence. She says that areas with high crime rates often also have high rates of domestic violence. Though crime in Bushwick has declined by almost 20 percent since 2001, last year there were twice as many rapes and 60 percent more assaults in Bushwick than the Brooklyn average, according to the NYPD.

Women living in low-income areas are twice as likely to be victims of domestic violence; in Bushwick, the average income per capita is about $15,000, compared to the NYC average of $30,500, according to 2010 census data. In New York City, black and Hispanic women are also more than twice as likely than women of other races to be injured or killed by their partners, according to the Department of Health. Bushwick is 26 percent black and 65 percent Hispanic, according to 2010 census figures.

“Bushwick is a mainly Hispanic community,” said Antonio Bascom, who works with domestic abuse victims in Brooklyn with Jericho Road, a domestic violence non-profit founded by his wife, Dr. Elena Bascom. “I’m Hispanic and in Hispanic culture, we value family above everything else. A woman will stay with her husband because of those ethnic ties and because of the stigma.”

Council’s ordeal came at the hands of a man with a history of violence against women. Abusive men, said Carl Joseph, who runs domestic violence prevention workshops for men through Jericho Road, repress their anger until it boils over. “They pent up their anger and emotions and they take it out on women because they think they’re weaker.”

Council had no idea about Page’s past when she began dating him when she was 20 and he was 32. She found out that he had been an abuser only during the subsequent trial, when a previous girlfriend came forward to testify against him.

For the first seven months of their relationship, things were fine, she said.

But then he slapped her so hard that it left a handprint on her face. A childhood friend had called Council, and Page erupted in jealousy.

Things returned to normal for a few months. Page would have dinner on the table when she came home from work. He’d lay her pajamas out for her, run baths for her. “He treated me like a queen,” Council said. “I thought I had found the man of my dreams.”

But the violence escalated, she said. “He’d cry when he’d see the bruises and say he’d never do it again,” said Council. “I couldn’t bring myself to leave him because I loved him.”

Tuller says this is a common cycle in domestic violence, and that often women make multiple attempts to leave their abusers. “It is hard for women to merge the two notions of their partner who they love and who may have done great things for them, but at the same time has done horrible things,” she explained.

“I thought he was going to change,” said Council. “I thought I could change him.”

In July 2008, when Council returned from a trip, Page tied her up and beat her for more than two weeks. Council escaped while he was sleeping and fled to her mother’s apartment in Bed-Stuy.

Today, Council  lives with her boyfriend, Marco Longmire. She’s expecting her first child in October and working as a home health aide.

Once she met Longmire, she said, she knew it was time to come to terms with her ordeal with Page. “I had to move on so he wouldn’t get the best of me.